It's been some time since we last heard from the talented Mr. Able. I was beginning to worry that he'd fallen prey to an experiment gone wrong, so you can imagine my relief when a message arrived in my mailbox.

"Mr. Able has recently released into the care of a trusted colleague a very curious and dangerous weapon known as a "Nemesis Blade". The knife shown in the photographs was created by the infamous occultist/scientist Anton Evisser."

The unassuming exterior of the Nemesis Blade storage box. 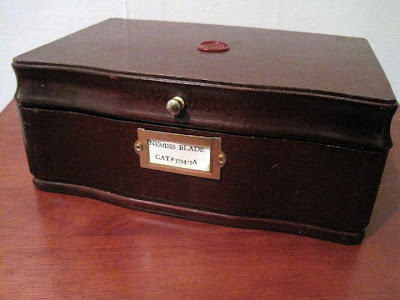 Given the Slovak origin of the blade I believe this is a regional spelling. 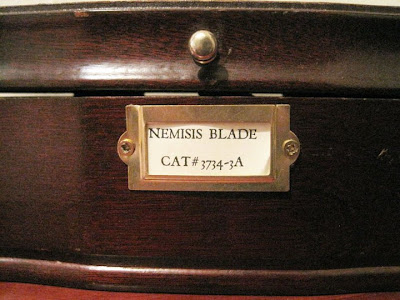 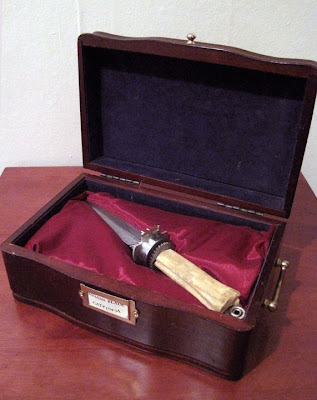 The handle appears to be bone (human?), and the markings on the blade look similar to the Widmanstätten patterns found in iron meteorites. I can only guess at the function of the mechanism in the guard. 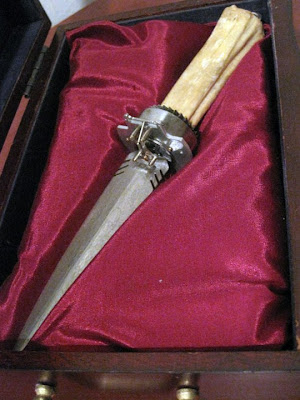 Another view of the entire blade. 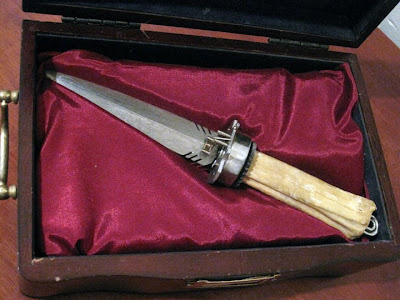 A closer look at the mechanism in the guard. 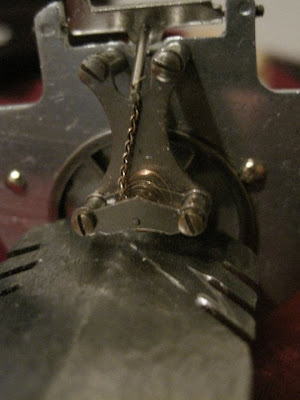 A clockwork power source? Or something driven by more esoteric energies? 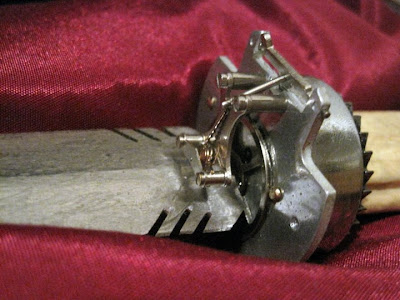 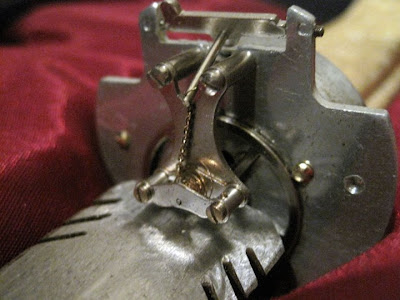 The note from Mr. Able that accompanied the artifact. 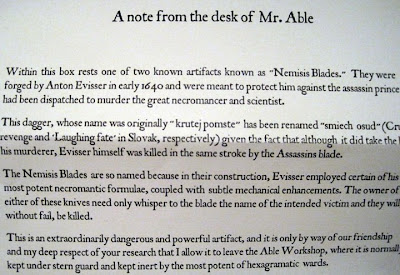 Given the destructive potential described above one can hope the blade's powers are in the service of good.
Posted by Propnomicon at 3:00 AM

I can only guess at the function of the mechanism in the guard.

Given the description in the note, presumably it's in aid of that self-directing ability. Some sort of steering function, perhaps? But as you say, this is a guess.

Dammit, that's shiny! Its beautiful in that ugly, brutal way that most dangerous products of a mad genius usually are. This will definately work itself ito my campaign, no doubt about it.

If the coils of wire that can be seen in the mechanism are wrapped around a magnet and can be somehow spun around that magnet by the little chain by pressing on the little tab on the bar above, a charge could be stored in the blade, presuming the chain and tab are non-conducive... perhaps those were once covered with something like rubber. It would take a lot of thumb-twiddling to generate any kind of significant charge, though.

However, if the wielder were to cover the surface in some kind of non-conducive but very flammable material, when approaching something conducive (the human skin, for instance), a spark would appear and the blade could catch on fire right before doing its terrible business.


One can see why the townsfolk wouldn't have taken a huge liking to Evisser.

That would be "conductive", blast it.

One can see why the townsfolk wouldn't have taken a huge liking to Evisser.

Yes, the blade wasn't exactly conductive to his popularity.