He wields the hammer, and the might, of Sigmar.  Arthammer LARP workshop returns to our pages with this warrior-priest of Sigmar wearing a custom fabricated and finished armor set. 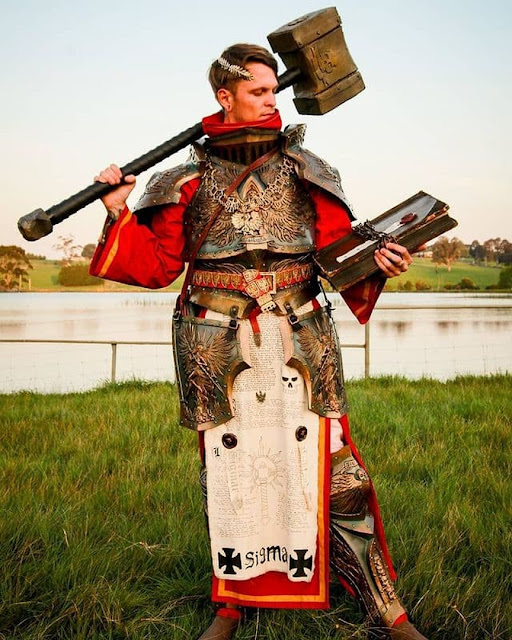 This Hellboy-inspired demon hunting compass comes to us from Ugo Serrano.  Crafted from etched brass, and featuring all kinds of nesting fiddly bits.  Click through here to see a video of the compass in action. 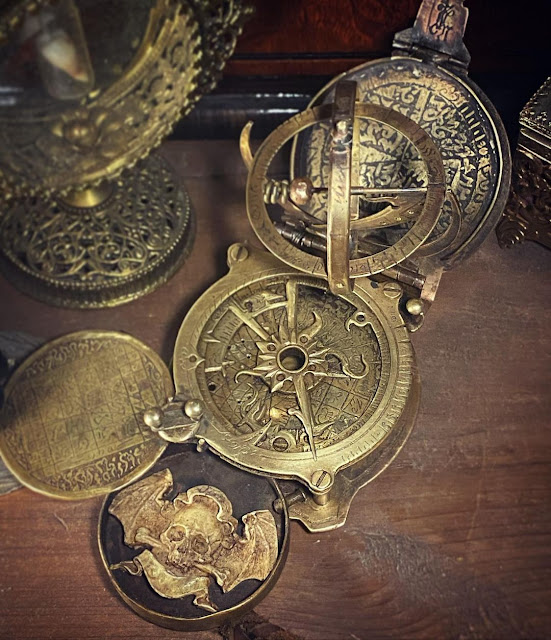 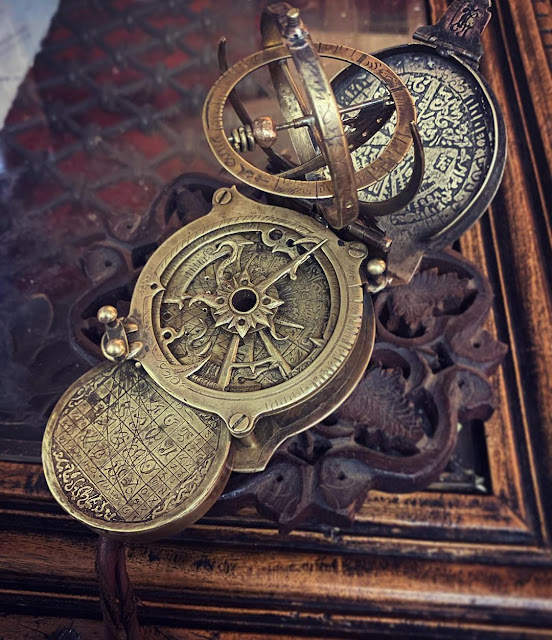 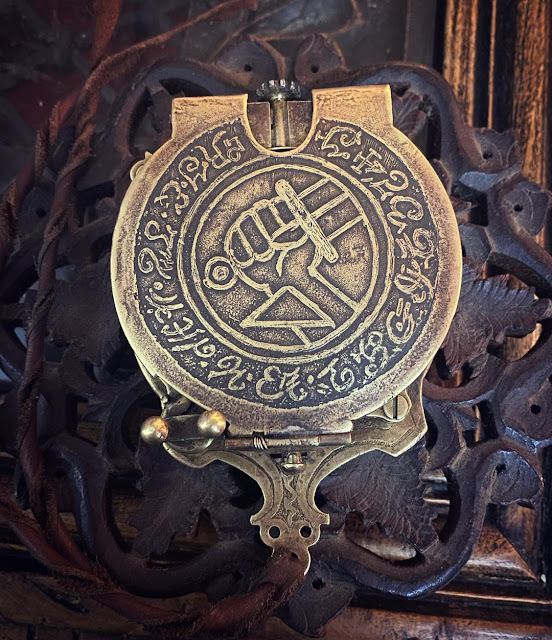 Raven provided me with a very kind reminder that I should probably update you on the status of the ATMOM project.

The good news is I've had everything in hand since mid-November.

The bad news is that I volunteered to be an election observer in the 2020 election.  Two, maybe three days of work, a nice per diem, doing my civic duty...what could possibly go wrong?

Well, everything.  My congressional district, NY-22, is currently the only federal election in the country that remains undecided.  Counting the ballots, and which ballots should actually be counted, is winding its way through the courts.  Unfortunately, everything has been on hold because there's still a chance I'll get called as a witness in either these proceedings, or the appeal, or the investigation into our local Board of Elections.
At this point I can't risk pulling the trigger on putting everything up for sale.   I take my integrity very seriously, and absolutely will not go forward if there's a chance I get called up and won't have the time to process orders in a timely fashion.  There have been too many horror stories about Lovecraftian fan projects imploding, and I don't want to put myself in the position of making excuses when someone emails me asking "Where's my stuff?"
I apologize for the delay, but I'd much rather push things back now than risk delaying things after you've given me money.
Update:  This isn't the place to discuss politics.  There are plenty of other venues for that.
Posted by Propnomicon at 12:00 AM 8 comments:

Labels: At the Mountains of Madness Project 2020

Amulet of the Odinson

This fantastic hand-forged Thor's Hammer pendant comes to us from Wyrdcor. 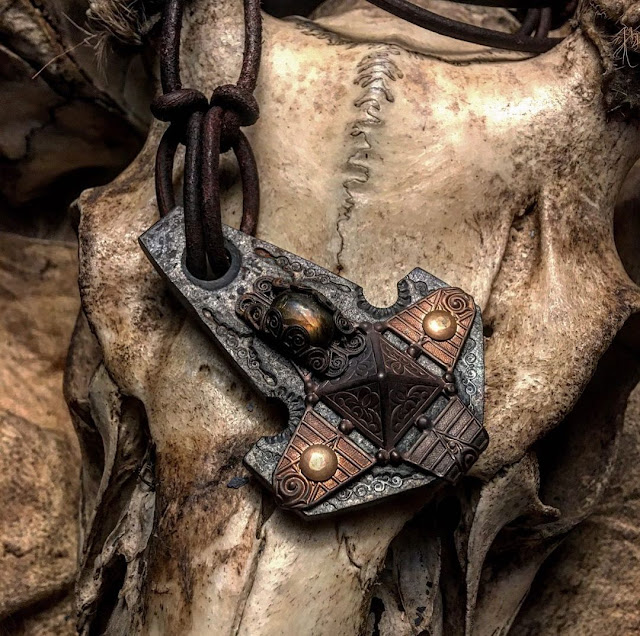 Cellar Trolls or Tavern Trolls are the much smaller cousins of the troll variety of Faerie lore. Often referred to as Spider Trolls, they have long limbs and are very fast. They live on insects, rotten fruit, and other refuse often found in tavern cellars. Like other faeries, they are mischievous and can be dangerous when in small bands. Tavern owners don’t mind one or two, because they keep the roach populations down, but they can be devilish when there is liquor to be had. Sometimes unwritten agreements are struck, and a ration of grog is given on a schedule in exchange for peace. In this way, the barkeeps get a tenuous détente and can go about their business in peace.

Tom Kuebler returns to our pages with this tavern troll, yet another of his horrific creations.  To be honest, I don't think I could ever own one of his works.  The sheer shock every time I flipped on the lights in my study, even knowing one of his creatures was there, would significantly shorten my lifespan. 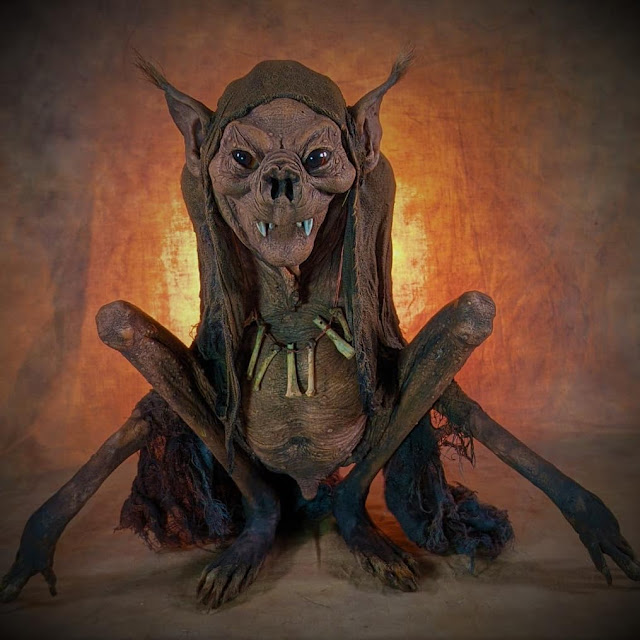 Following up on the post discussing vintage burglar's tools, I stumbled across a fantastic resource for crime in the classic Mythos era of the 1920s- "Keys to Crookdom" By George Cochran Henderson.  The book was published in 1924 and is notable for popularizing a variety of criminal slang, including "bum steer" and "bootlegger".

From what I can find, Henderson was a California-based journalist and writer who specialized in true-crime articles for newspapers and magazines through the 20s and 30s.  Over that time span he also wrote seven novels, primarily pulpy westerns like "The Killers" and "The Phantom Outlaw: Singing Lead".  "Keys to Crookdom" was his only non-fiction book.

I was primarily interested in period burglar's tools, but the book covers every aspect of the criminal underworld.  That includes safe cracking, automobile theft, pickpocketing, swindlers, forgery, con men, arsonists, and the illicit liquor and drug trades.  Two other varieties of crime were particularly notable.  The first is fraudulent mediums.  Henderson has a good overview of the spirit game, including some of the techniques used to convince marks they were actually talking with the dead.  Those handy details would be ideal for a period Call of Cthulhu game.

Banditry was the other outlaw trade that drew my attention.  I was genuinely shocked by how common highway robbery and home invasions seemed to be in the 1920s.  Figures like Bonnie and Clyde might get all the headlines, but they were just following in the footsteps of a well-established criminal career.

Thankfully, the book is out of copyright and available via both Google Books and the Hathi Trust.  If you're planning to download it and read it on a tablet I'd recommend the Google link.

As a heads up, by modern standards the book contains some shockingly racist and sexist content. 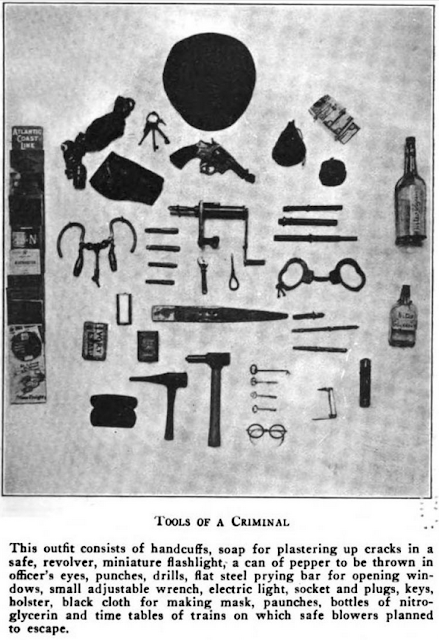 This adorable orc couple comes to us from Orkclan Grishum Dushtalla.  Surprisingly enough, they're a member of the Orkhorde LARP group. 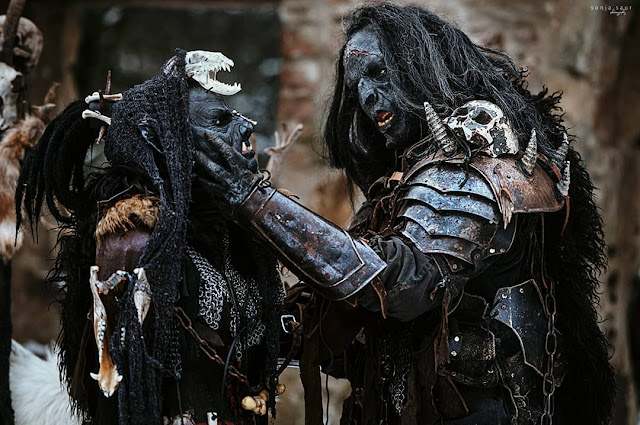 The burglars’ tools, in the language of the profession called “kits,” are divided into several classes; they are jimmies, chisels, wedges, hammers, skeleton keys, nippers, drills, punches, jacks, clamps, etc. We present in our engraving some specimens of the modern and most improved kinds.

Let's be honest.  Most RPG player characters are criminals of the worst sort.  Assault, murder, robbery, breaking and entering... just another day of adventuring.  They may be on the side of the angels, but they're still living the life of a ne'er-do-well.

If you're looking for a little verisimilitude, this article on vintage burglar's tools should come in handy.  It comes to us from the May 1874 issue of "Manufacturer and Builder" magazine.  Along with a look at the tools of the trade it has some helpful (!) advice on how to use them.  You can view and download the high resolution scan by opening the image in a new tab. 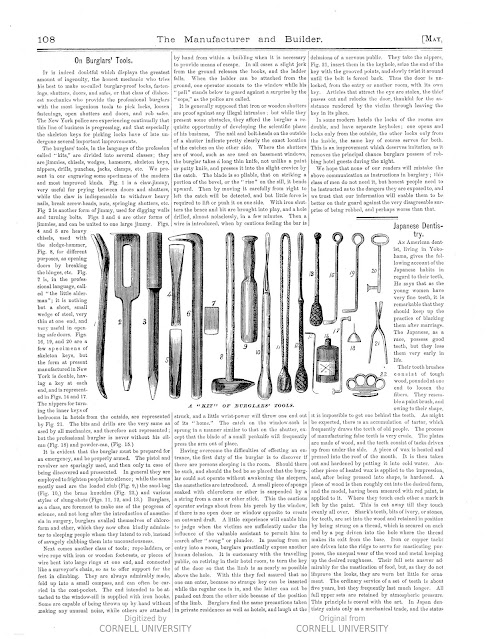 This beautiful bronze-age style LARP helmet comes to us from Arte sul Cuoio Workshop in Italy. 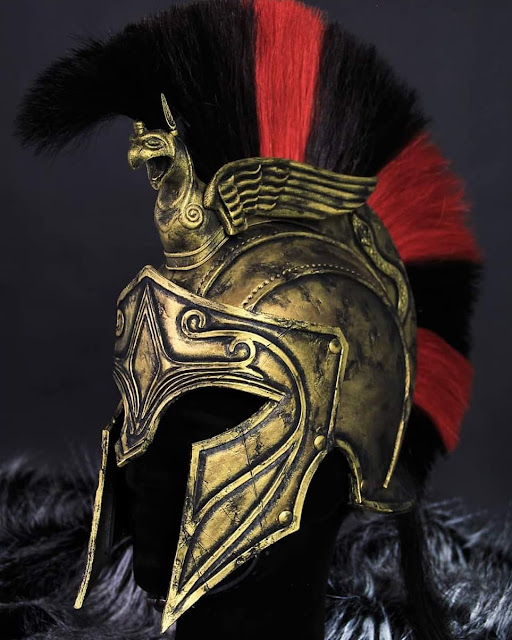 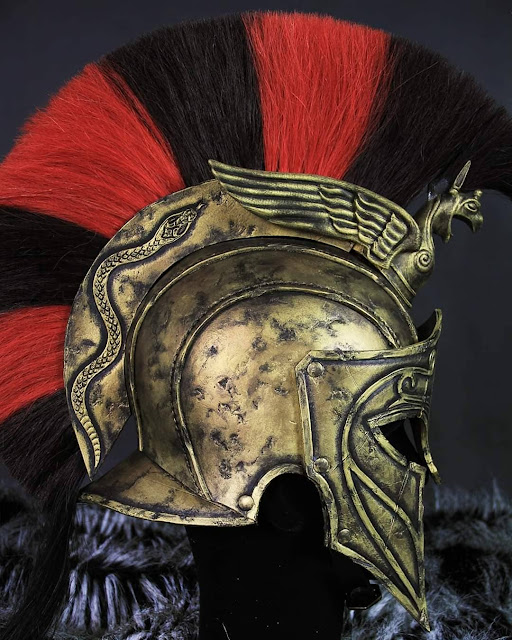 Off to Rio, Via the Graf Zeppelin

One of the most useful resources for gaming in the classic era of the Mythos is the British Pathé YouTube channel. It's filled with hundreds of newsreels going all the way back to 1910, and dozens more are added every week. Over the company's long history it covered everything. Contemporary news events, the latest in period technology, exotic locales around the world, offbeat people and events...you name it, it's in there. The archives are a goldmine of research material.

As an example, here's their look at the flight of the Graf Zeppelin from Frederikshavn to Rio de Janeiro in 1932. Amazingly, the over 5000 mile journey took just four days to cover three continents. Is there any location more filled with adventuring potential than an airship in flight?  The gentleman with the ear horn is just begging to become an NPC.


Posted by Propnomicon at 12:00 AM No comments:

The gifted Patrick Magee returns to our pages with this example of Homo sapiens homovorus in its flying form.  Those eyes are amazing. 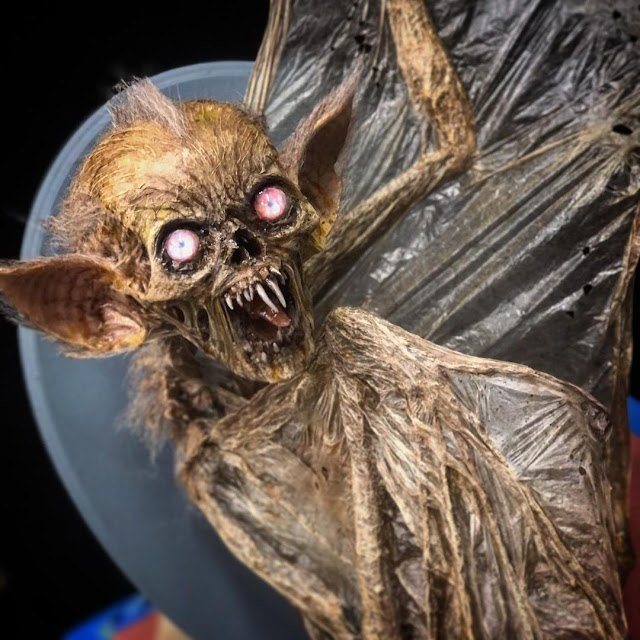 This here is some awesome prop p*rn.  Ewalina brings us this Harry Potter themed tableaux.  The wand by Wizarding Lifestyle is cool, but it's the accessories, including that awesome wand registration form, that really push it over the top. 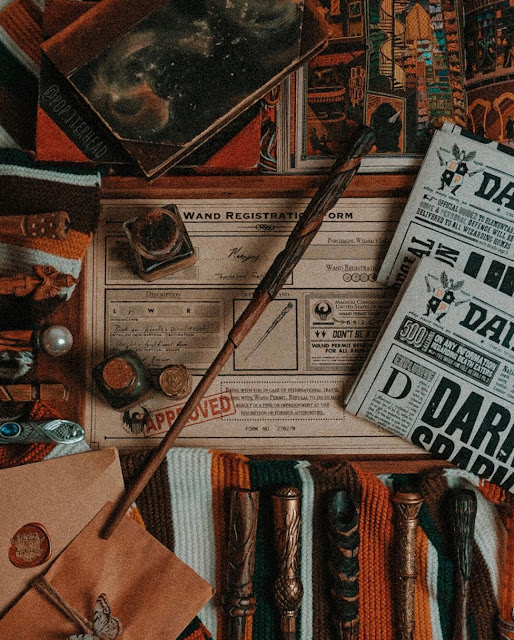 The Black Book of Cthulhu 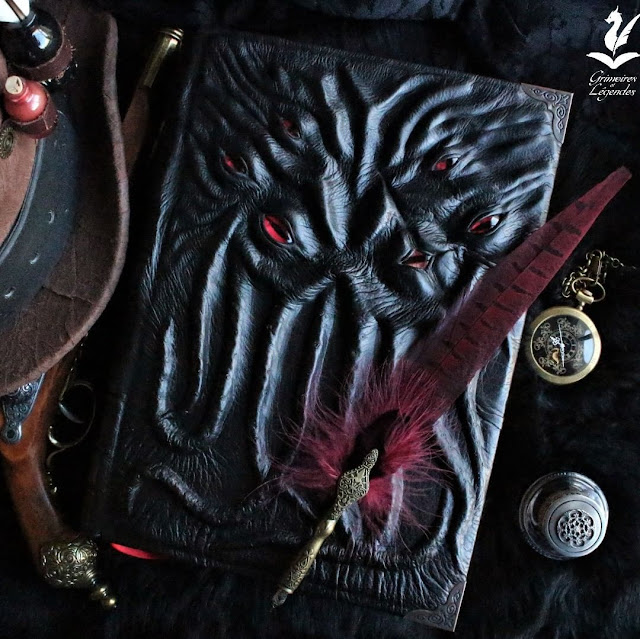 The Haunter in the Dark

The talented Jason McKittrick returns to our pages with this faux jade figurine of the Haunter in the Dark.  Beware the three-lobed burning eye. 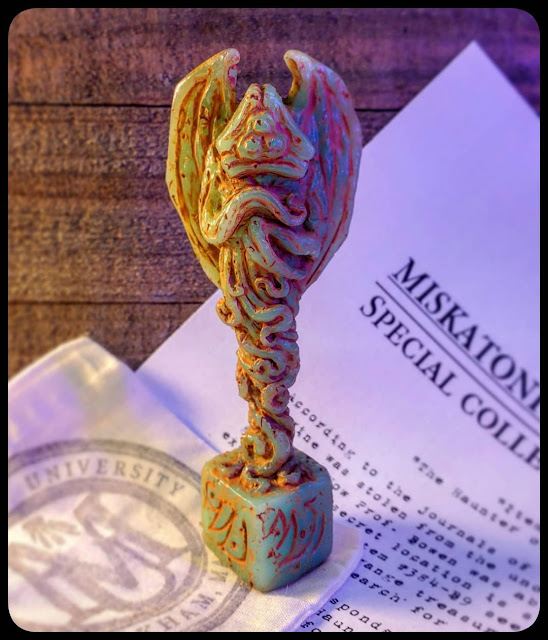 When the stars are right, this pewter Cthulhu amulet from Doctor Gus may be enough to keep you from being devoured.  Well, at least for a little while. 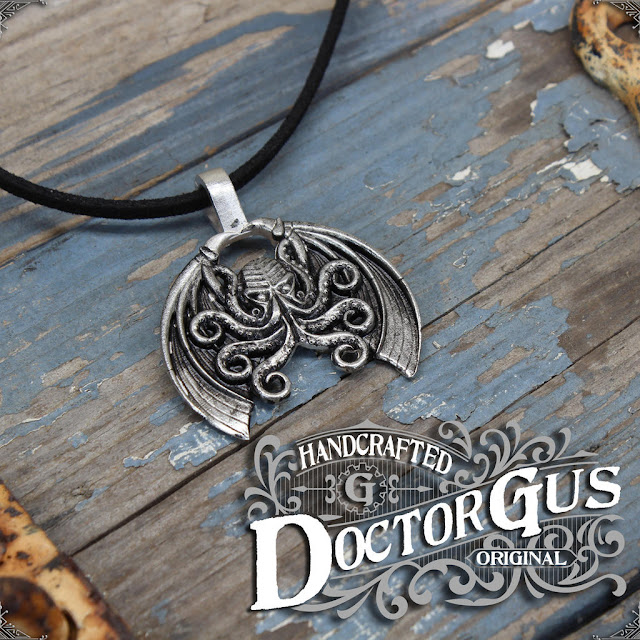 Artist Roger Labat returns to our pages with this mummified decapitated head.  The dry, dusty finish is just perfect. 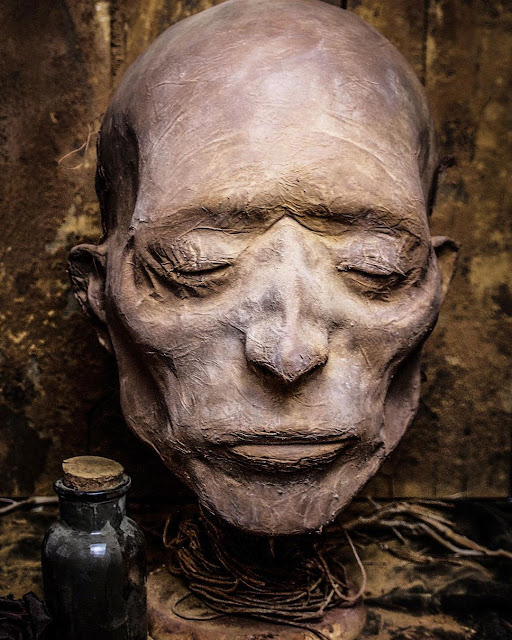 This wonderful tableaux of a witch's implements comes to us from Alessia Patti. 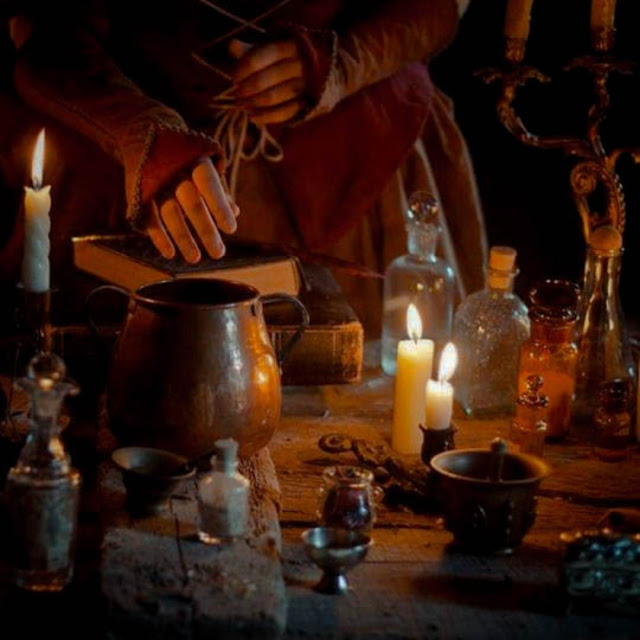 Just a few more months, and a couple million vaccinations, and we can finally have face to face RPG sessions again!

When that blessed day arrives, this is what I'll be using as a prop spell scroll for first level spells.  I like the idea of scrolls as a kind of arcane circuit diagram, with scribed geometric figures controlling and channeling the arcane energy within energized sigils.  That's the "fire and forget" aspect.  The explanatory text is an description of the spell's mechanics suitable for transcription to a wizard's spellbook.

To use, just click through to the full sized image, download to your computer, and print on 8 1/2 by 11" paper, preferably a faux parchment.  For player reference I've included the text for "Magic Missile", but you can swap that out with whatever spell you want the scroll to represent.  It's usable as-is, but mounting it on a scroll rod will significantly improve the handout's immersiveness.  I've left an inch of empty space along the bottom to account for that.

The text blocks are random passages from Julius Caesar's Latin commentaries on the Gallic Wars.  The font is Voidspiral Entertainment's Nakaryon's Gifts. 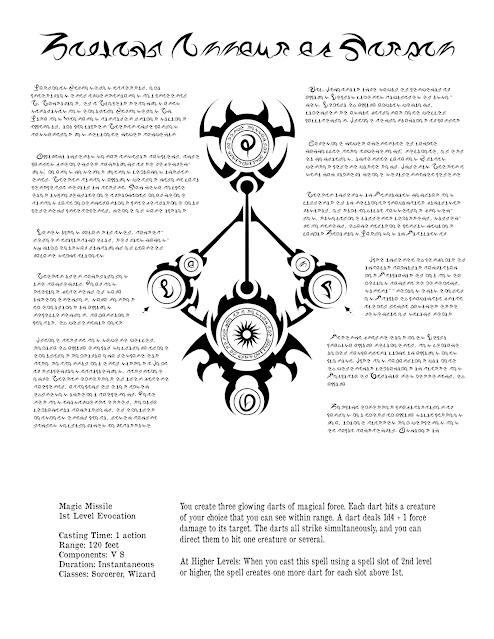 I absolutely love Jens Vikingsson's tribal seer.  Not only for the quality of the costume, but for seeing someone close to my own age LARPing.  Photograph by Dabow Photography. 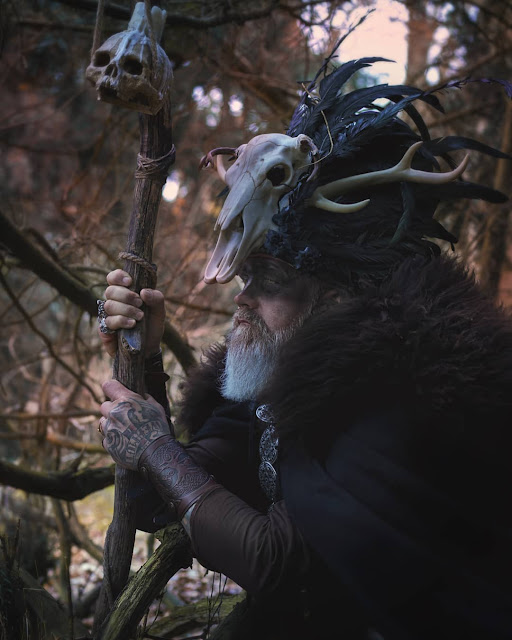 Lore of the Elder Things

This Elder Thing grimoire page comes to us from artist Israel Botelho.  Click through to check out more of his work, including additional Mythos-inspired tome illustrations. 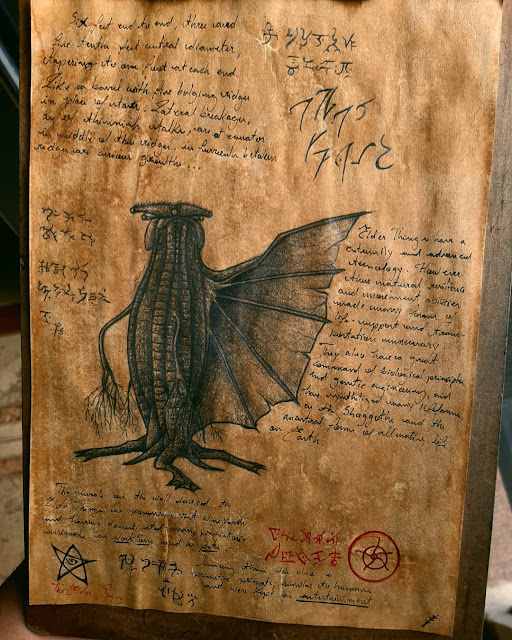 House goblins are infamously capricious.  Luckily, Fabelrot has a charm that keeps them happy, bringing the owner peace of mind, good fortune, and wealth.  I suspect the use of real goblin hair serves as an example of what happened to the last house goblin. 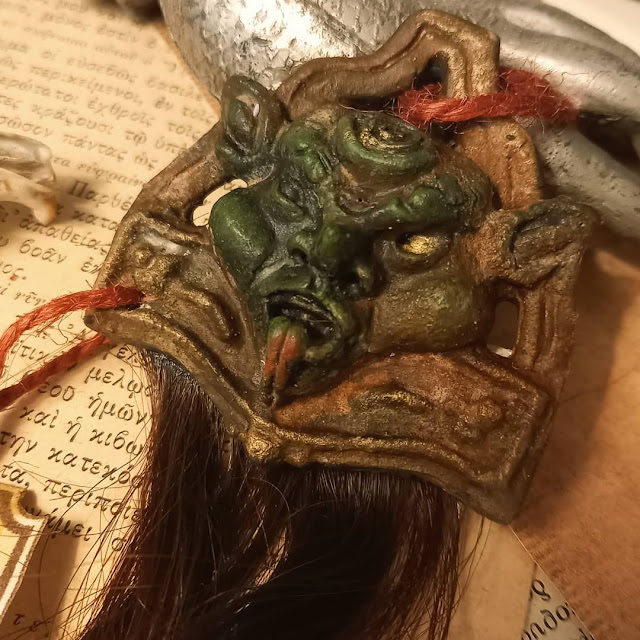 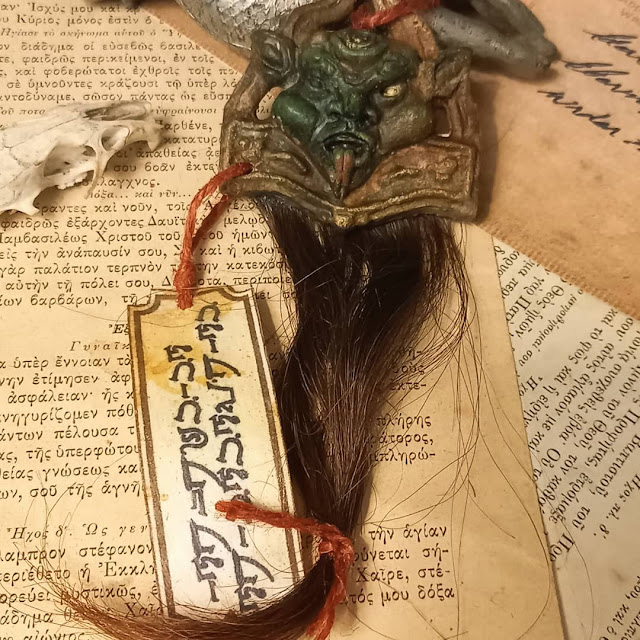