Mr. Able of The Able Workshop was kind enough to send over a look at his latest project: The Joseph Curwin Thesis field box.

Not long ago, a student at Miskatonic University researching trans-dimensional vampirism came across a singular artifact while excavating the ruins of what was once the house of the infamous Joseph Curwin. The box seems to be a field case of some sort, most likely used by Curwin in his travels and research when not at home. The box contains most notably a partial mummified skeleton of what appears to be an infant male (most likely used as a reagent to aquire mumia, which is a key ingredient in the processes of revivification that Curwin pioneered.) There are two types of salts, custodes and materia, and several vials of liquids, powders and other curious elements that can only be guessed at as they are sealed.

A drawer in the box reveals a Simon edition of the NECRONOMICON, however the book itself (owing to the cover) was known as "The Scarab Occult" and thought long lost. The function of the rod (wand?) in the drawer is not known. 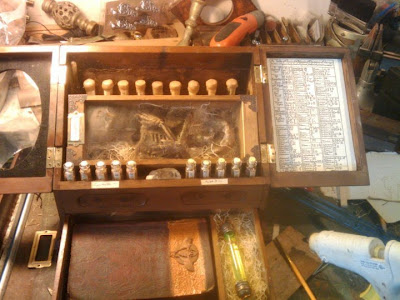 An overall look at the field box. The central compartment contains the fetal skeleton and a variety of vials, while the lower drawer holds "The Scarab Occult" and a wand of suspiciously familiar hue. I've always suspected that Herbert West was more than a little familiar with Curwin's work. 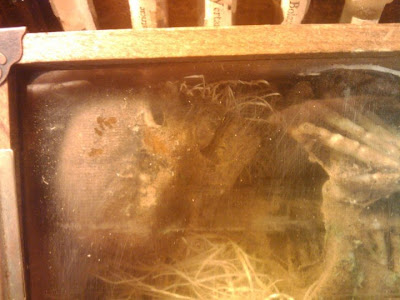 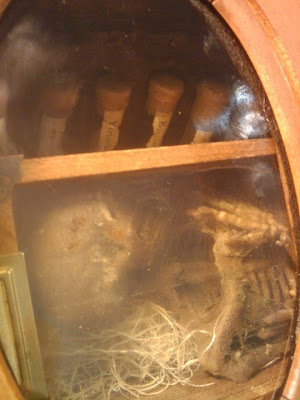 A lightly wider angle showing the storage box for the skeleton. I believe the corner pieces are custom etched, which is a nice touch. 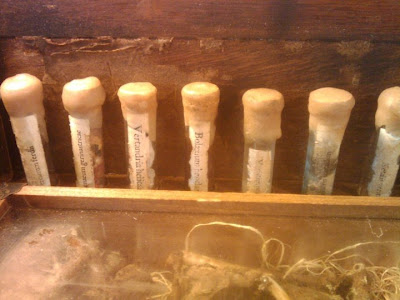 Vials sealed with wax. Mr. Able handily avoids one of my pet peeves- storage containers that would promptly spill their contents all over the place if the prop was actually used. See the numerous vampire hunting kits on Ebay for examples. 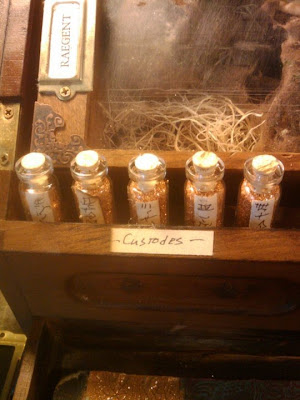 Essential salts, with properly seated corks. It's probably for the best that there isn't an example of "ye liveliest awfulness" visible.
Posted by Propnomicon at 3:00 AM

I love these kits...one of these days, I'm going to make one for myself!