The talented Rev. Marx has been producing a series of props for the indy film "The Black Duke". His latest update on the project features an excellent tutorial on converting an off the shelf wooden box into a convincingly aged artifact.

First I started hammering dents into the surface with a small ball peen hammer, then I took some heavier swings at it with a claw hammer. Then I started raking the claw of the hammer across the surface. Then I started making divots and gouging small chunks out of it with the claw. I was making some significant damage, but it was not enough. I have done this kind of distressing in the past to simulate age, and usually, just a few dozen light whacks with the hammer to dent it up is sufficient to make it look old, but this project called for more extreme measures. 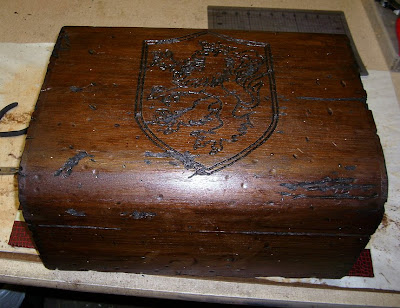