Today we have a vintage painted color postcard of Arkham Sanitarium dating back to around 1920. This view shows the front approach to the sanitarium and the two immense United States flags that flew in front of the compound until August 26, 1924, when they were destroyed during a massive storm.*

This is one of the postcards that will be part of the Arkham Sanitarium prop package, but feel free to print out your own. The package itself is now in the home stretch and should be mailed out in approximately two weeks. I've received the funds from Amazon payments and will be sending out all the materials for production on Tuesday (Monday being the Labor Day holiday here in the US). 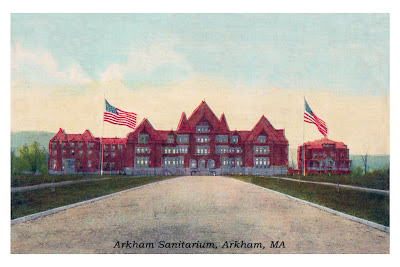 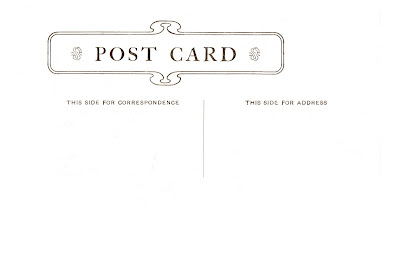 * A very real storm that ravaged the area where Arkham would be located. Winds up to 90 MPH knocked over trees, drove ships in harbor aground, and tore off roofs. The damage would have been even worse, but the storm peaked at low tide, sparing coastal areas from an overwhelming storm surge.
Posted by Propnomicon at 3:00 AM

Integrating the real-history storm of 26 AUG 1924 into Arkham's (and the Sanitarium's) history is, to borrow the words of someone I respect greatly, "just the kind of real world/Mythos research that I most dearly love."

Heh. I had a bit of a problem because of the two postcards in the package. The one from the early 20's had the giant flags while the one from the mid-20's didn't. Luckily, real history came to the rescue with a storm that fit perfectly into the fictional geography and timeline.

Proving the reality of your supposedly "fictitious" scenario....

This bit about inconvenient discrepancies that real history turns out to resolve for you -- reminds me of the back-and-forth debate about the Kensington Rune Stone. One of the early arguments for its falsity was that the language was simply so wrong it showed the ignorance of the modern forger, and on that modern scholars could agree.... but then scholarship advanced, and the Stone was found to match an old dialect that even the earlier scholars (and thus surely any forger) had never known about. *