Skaal and Co. demonstrates once again that there's essentially no difference between real weapons and their LARP equivalents.  The detail on this combat safe foam viking axe is really impressive. 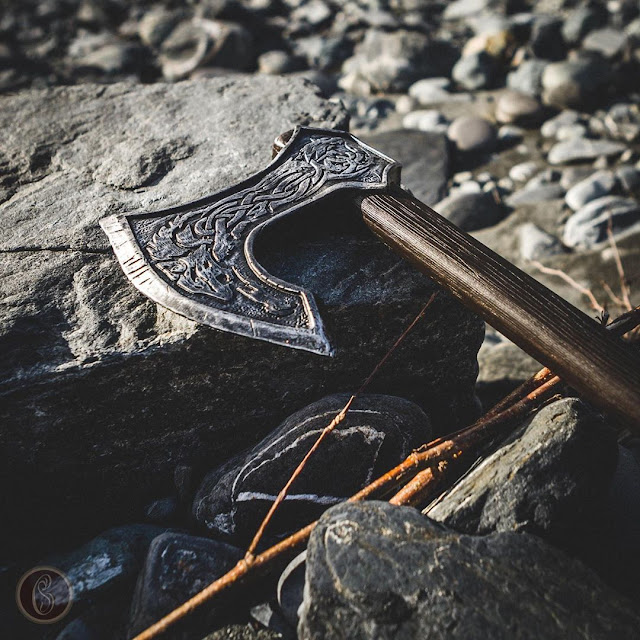 The gifted George Tsougkouzidis returns to our pages with this flowing Cthulhu idol.  I'd rejoice to have a tenth of this talent.

Arend Smith returns to our pages with this tusked fantasy skull.  The texture work on the cancellous bone inside the nasal cavity really kicks it up a notch. 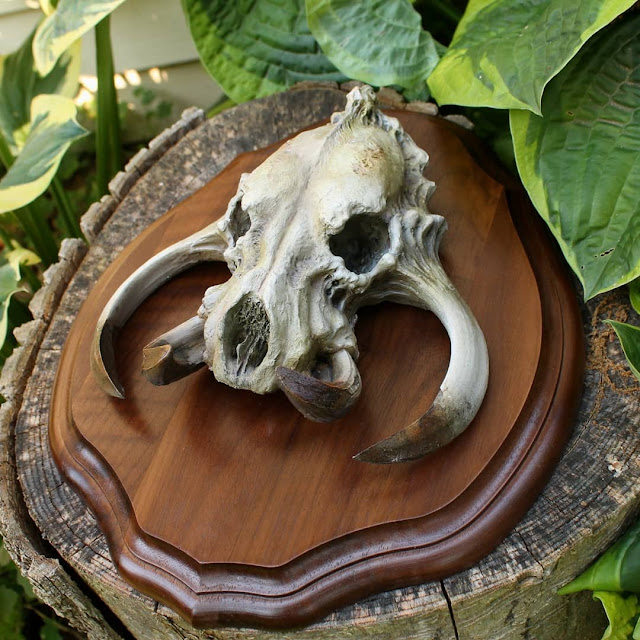 Townsends has produced a great pair of videos discussing historical quill pens and ink.  I knew oak gall ink had high levels of tannic acid, but never realized it actually etches into the fibers of the paper.  It's a great introduction to the subject for anyone creating handwritten documents for live action or tabletop games.

The Game is Afoot

Propping Up the Dungeon, Part Deux

TLDR version of Part One:  I like the Pathfinder RPG.  I want to try running a game that adopts the prop-heavy approach of Mythos gaming to a traditional fantasy tabletop.  The large player base for Pathfinder makes it a good venue for that. 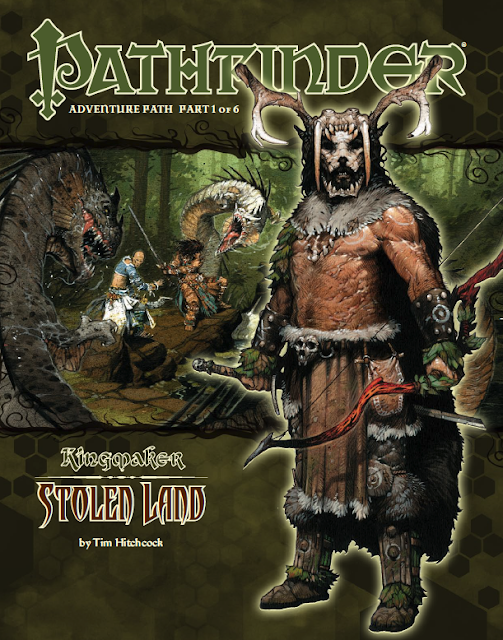 So why am I so enamored of the "Kingmaker" adventure path?  There are a couple of reasons, all of them supporting the use of a high-touch, prop-heavy approach.  I won't touch on any major spoilers.

1. The campaign's setup involves a band of adventurers receiving an official warrant to survey and develop a wilderness frontier.  Think "Lewis and Clark" mixed with the merchant adventurer companies of the Post-Columbian colonial period.  In the current era the area being explored is largely unknown, but that wasn't always the case.  There are historical documents, journals, and maps describing what was there in the past...and what may be happening there currently.

2.  A quirk of the Pathfinder world, shared by D&D, is that magical communications don't become available until characters have advanced a few levels.  Yeah, it's gamey as hell, but it is what it is.  Because of that, and the limits on message spells, most of the communication between the expedition and their sponsors has to be physically carried.   Luckily, there's a reasonably reliable courier service that uses the adventurer's base of operations as a stop on their multi-day journey between the two nearest cities.

This opens up some great opportunities for storytelling.  As epistolary tales like Bram Stoker's "Dracula" demonstrate, letters and messages can help build up an engaging narrative.  It also gives the players something interesting to do during the downtime between tabletop sessions.  As the campaign progresses the number of potential correspondents grows substantially as the adventurers build up their kingdom.

3.  In normal play players will have absolutely no chance of learning the significant backstories behind various characters and villains.  Based on accounts from players and GMs this isn't a problem unique to Kingmaker, but one found in a number of Paizo products.  Disseminating it via in-game writings makes it available to players without breaching immersion.

4.  Kingmaker already has a number of documents that feature prominently in the plot, including a series of official warrants, flyers posted at the central adventuring location, invitations to some notable public events, etc.  I'm surprised these haven't already been packaged as handouts.

Beyond the adventure specific items I also want to fiddle around with having actual props for loot.  That includes coming up with coinage, gems, potions, and scrolls.  It's going to be a while before I feel comfortable enough to run Kingmaker, so working on those will let me dip my toe into a high-touch approach before diving in all the way.

As always,  your thoughts and suggestions are appreciated.
Posted by Propnomicon at 3:00 AM 3 comments:

Propping up the Dungeon

I wanted to get your thoughts on the Pathfinder RPG in general and the "Kingmaker" adventure path in particular.

I took advantage of a Humble Bundle deal earlier this year to score pretty much every Pathfinder book in PDF form.  It's been decades since I played a traditional fantasy tabletop, but there was soooo much material included I couldn't resist.  At the time I didn't have any real intention to play, but I'd heard some good things about Pathfinder's worldbuilding.

Since then I've been working my way through the material.   I really like how customizable characters are.  The last time I played D&D was back in the late first edition era, when classes like the Barbarian and Cavalier were revolutionary.  The proliferation of classes in Pathfinder, with dozens of archetypes for each, was a pleasant surprise.  As was the insane amount of Cool Stuff each class is capable of thanks to the combination of class features and feats.

Golarian, the default Pathfinder world, comes across as the natural evolution of old school gaming's "anything goes" approach.  That includes features that are direct callbacks to some of the more bizarre locations from first edition D&D, like the infamous crashed starship of "Expedition to the Barrier Peaks".  Oddly enough, it reminds me of the full bore insanity of Dave Hargrave's "Arduin" setting more than classic settings like Greyhawk.  They were nutty, but not "phaser armed insectile slavers from deep space invading the seventh layer of Hell" crazy like "Arduin" was.

All that is just a wordy way of saying I like Pathfinder.  The mechanics are reasonably similar to what I grew up with, so it hits my nostalgia button.  At the same time it throws off the admittedly limited options of classic D&D with a plethora of options.  And, most importantly, there's a thriving player base locally.

Which brings me to "Kingmaker".

I've said before how odd I find it that traditional fantasy RPGs haven't embraced a prop-heavy approach.  Prop documents, artifacts, and ephemera are hugely popular in Mythos gaming, but strangely rare in tabletop fantasy.  I want to take a crack at changing that, and I think the "Kingmaker" adventure path is a perfect candidate for it.

I'll go over the reasons why tomorrow. 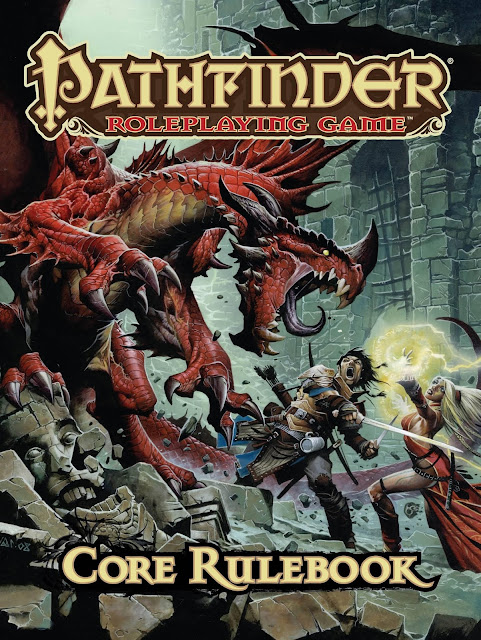 Posted by Propnomicon at 3:00 AM 4 comments:

Amulet of the Ecclesiarchy

This Amulet of the Ecclesiarchy from Warhammer 40k comes to us from artist Stanislav Marseau. All hail the imperial cult! 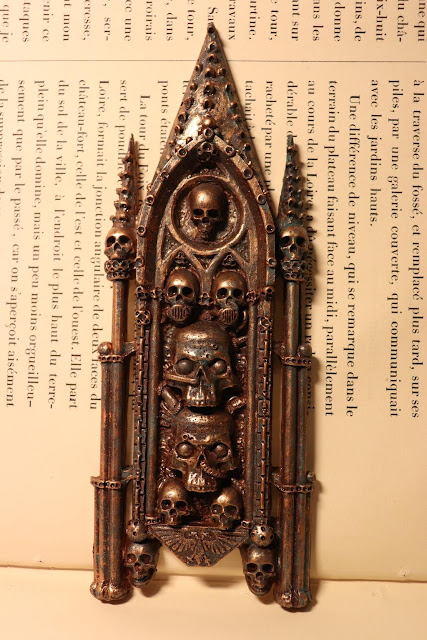 The talented Karen Main returns to our pages with this delightful seaside horror.  I immediately thought of Elizabeth Bear's classic Mythos story "Shoggoths in Bloom" when I saw it.  It's one of the most subtly terrifying stories of the modern era.

This nicely done Deep One mask sculpt comes to us from artist Chris Walas and his daughter. 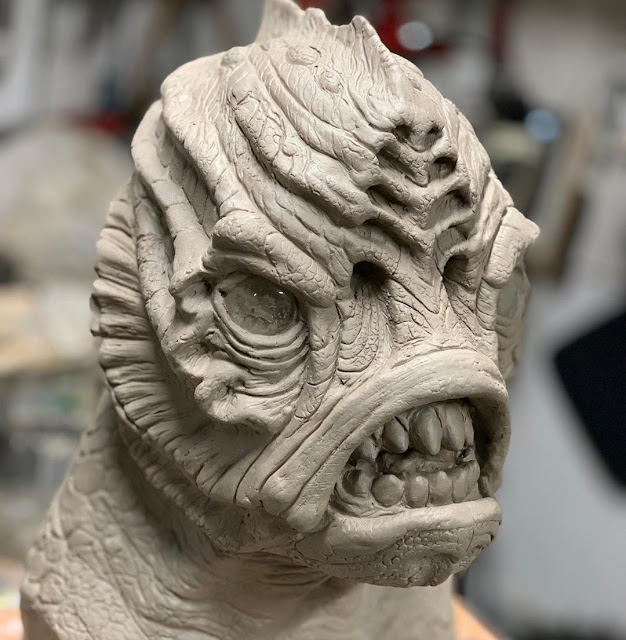 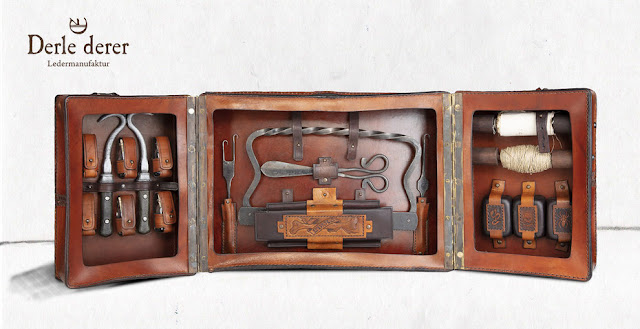 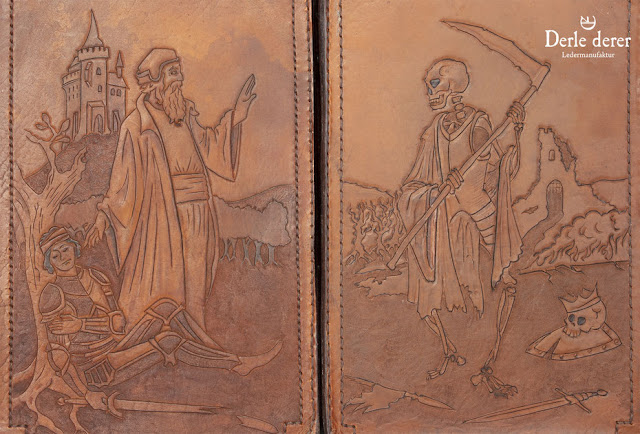 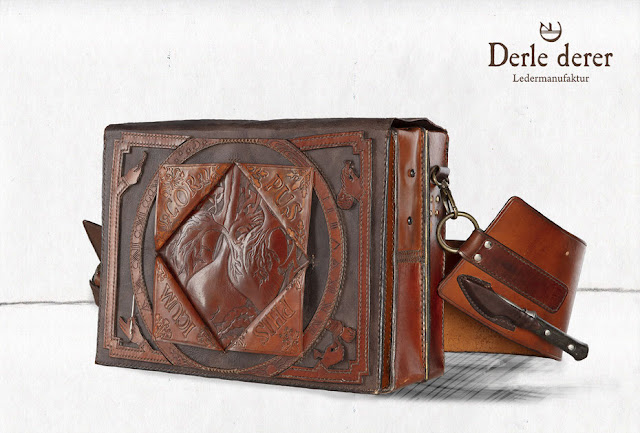 Enjoy Your Stay at Gilman House

I love obscure props, and this certainly qualifies.  Juna Handmade brings us a key rack from Gilman House, the establishment featured so prominently in the climax of "The Shadow Over Innsmouth". 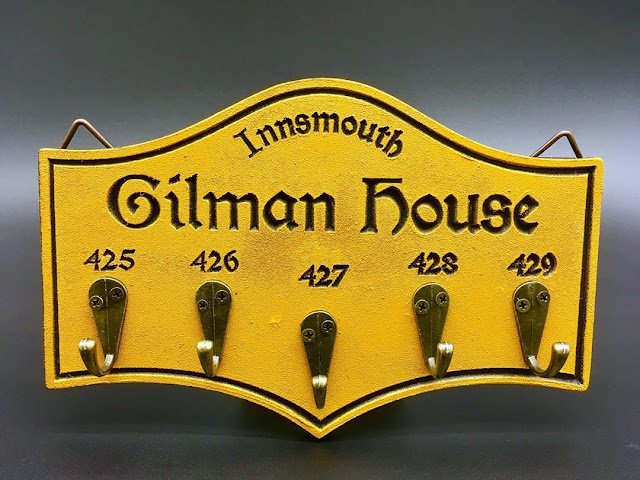 Curionomicon returns to our pages with this bronze Cthulhu amulet.  It has a wonderfully primitive look thanks to the rough texture produced by electroforming the metal.

Update:  The artist was kind enough to point out that the metal is actually copper.  The bronze appearance is an artifact of patination.

Sweet fancy Moses, this is a treat.  Two of the best Mythos artists around, Jason McKittrick and Gage Prentiss, have teamed up to bring us this collection of artifacts from the infamous Innsmouth raid.  You can see them all at the Ars Necronomica art show in conjunction with NecronomiCon Providence. 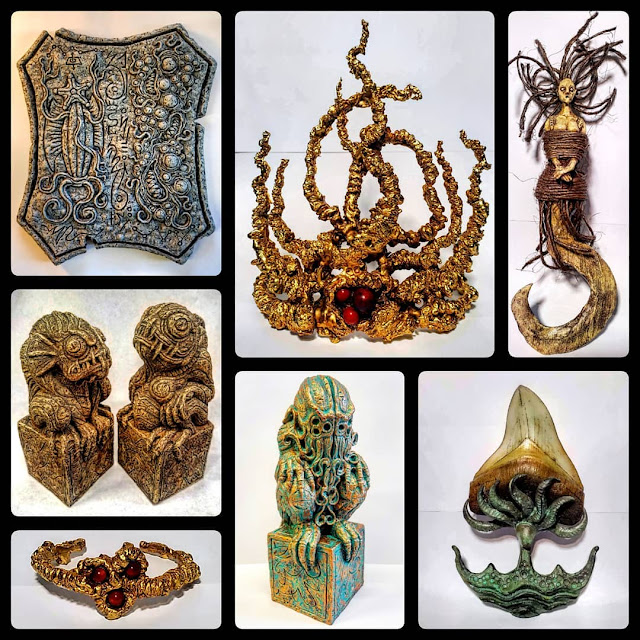 Posted by Propnomicon at 3:00 AM 2 comments:

This patinated take on the traditional Cthulhu idol comes to us from artist Dan Hiryak.  I like how the sculpt incorporates the visual cues from Lovecraft's sketch of the artifact. 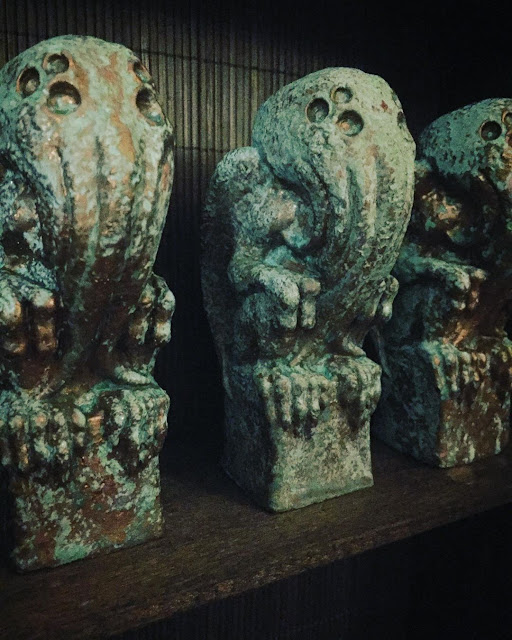 Morsoth brings us his personal recreation of the Arabic edition of the Necronomicon. Featuring custom printed pages and hand bound in leather.

At first glance this looks like an unfortunate adventurer being punished by a stay in the stocks.  Luckily, it's actually how followers of Slaanesh are rewarded for service to the Lord of Excess.  The Larping Photographer brings us this snapshot from a Russian Warhammer LARP. 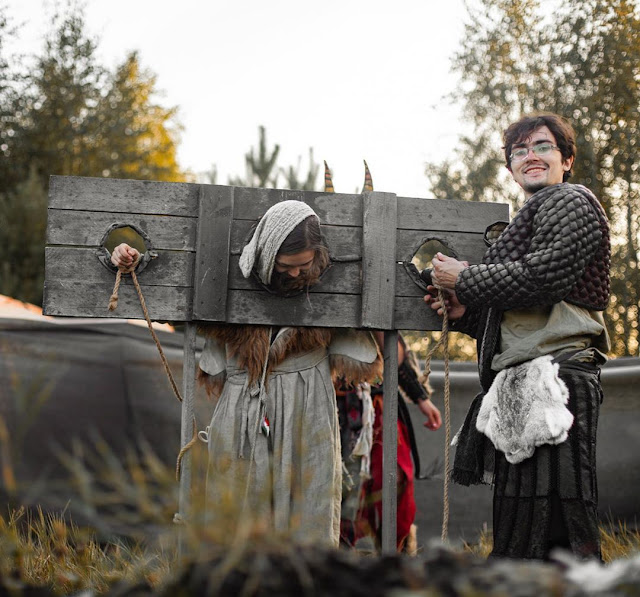 Dwellers in the Deep

Joe Broers is back with another fantastic piece.  This time it's a faux bronze sculpture of Deep Ones on the prowl. 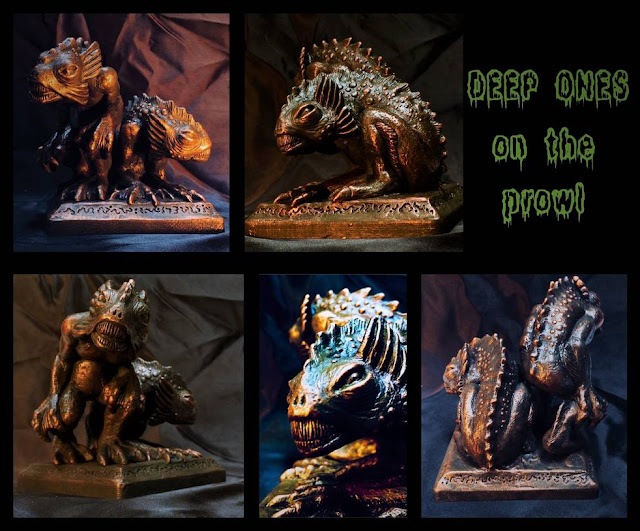 Over the years Michael R. Miranda has produced some amazing paper props.  His latest is this collection of Victorian era banknotes for an upcoming LARP event. 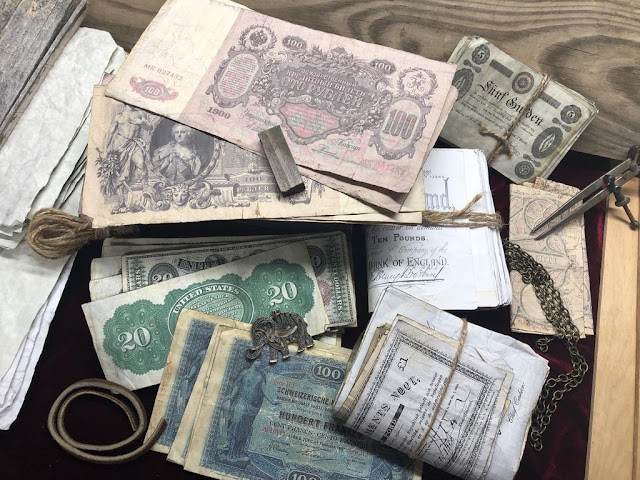 Posted by Propnomicon at 3:00 AM 2 comments:

Burned Raven Tales returns to our pages with a collection of alchemical vials.  I love the faux metal finish. 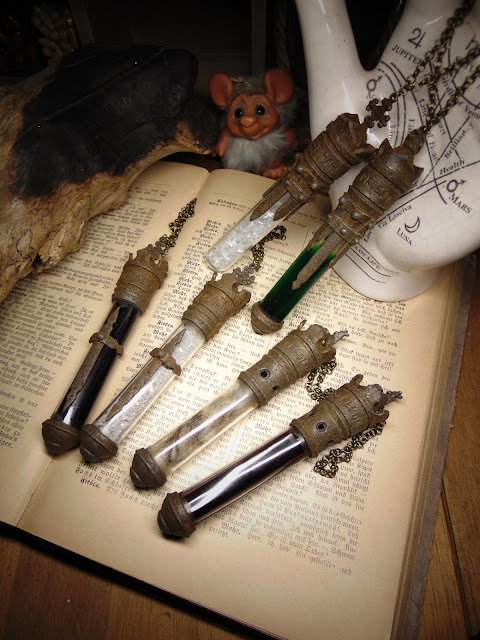 This beautifully well crafted custom grimoire comes to us from the talented Mille Cuirs.  Hand bound in leather with a custom glass eye inset and tooled tentacles. 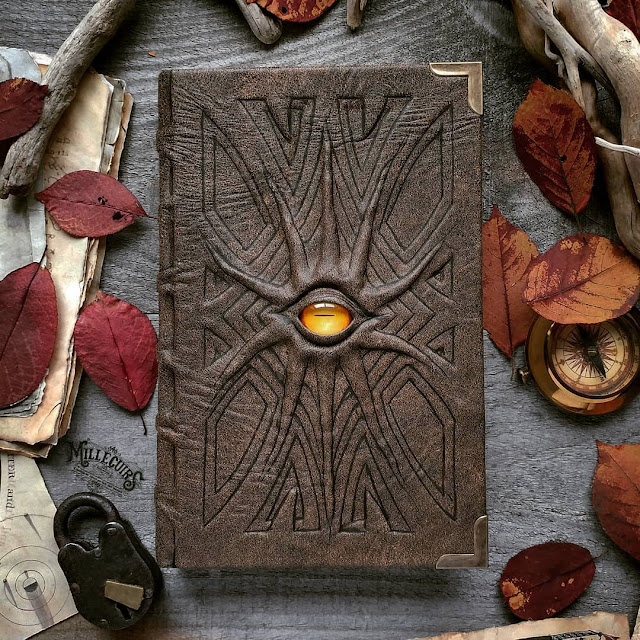 Geekynerdcouple brings us this ornate Slaaneshi witch costume from a Warhammer-themed LARP.  There's so much to like here, from the beaded dreads to the multiple layers of texture in the robe. 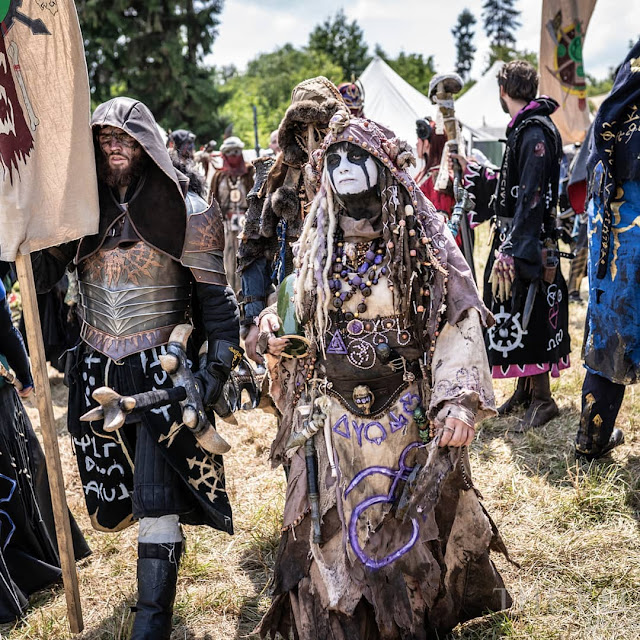 This dragon journal from the appropriately named Dragonarium demonstrates why dragons are near extinction- their hides make fantastic book bindings. 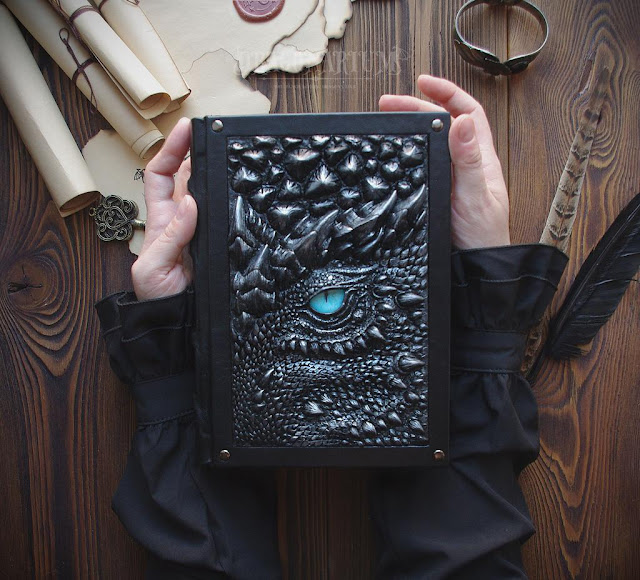 The Curious Case Of The Mystery Mythos Movie: Part Three

Wow.  This is quite the flashback.  Over forty years ago I first came across the ill-fated "Cry of Cthulhu" movie.  For most of that time I only had a vague memory of an article about the project from Starlog magazine in the late seventies.  Ten years ago a discussion of Tom Sullivan's mythos art lead to the rediscovery of that material.  You can read the original posts over here: The Curious Case Of The Mystery Mythos Movie, Part One and Part Deux.

Now author Byron Craft, who wrote the screenplay and served as a producer, has posted some long lost production stills from the film.  These were spotted on Ebay by Craig Mullins.  The bottom maquette was featured in the longer Starlog article, but the top figure, presumably a byakhee, appears to be unpublished before now. 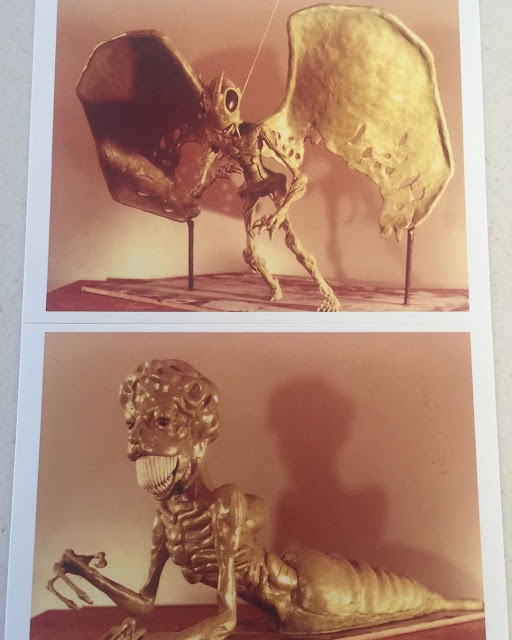 Posted by Propnomicon at 3:00 AM 3 comments: