I fiddled around with a couple of different takes on the Arkham Sanitarium patient file folders. This is the straight version. I'll apologize ahead of time for both the wiggy photography and my terrible handwriting. I had to kludge together a copy stand for the shots and didn't feel like bothering my significant other for her penmanship services. Click through on the pictures to see the high resolution versions. 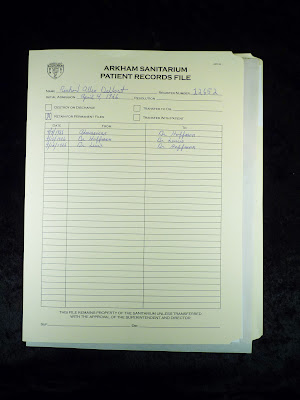 One feature of the folders I like is that they're essentially timeless- pick a Mythos era, from classic to modern, and they'll fit right in. Full tab filing folders have been around since vertical filing replaced the cubbyhole system of the 19th century. 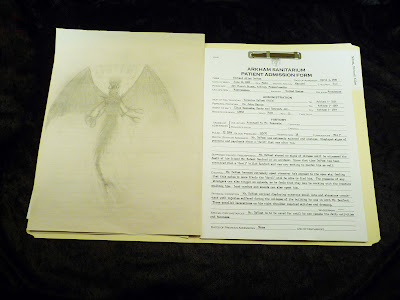 Here we have the details of the unfortunate Mr. DeVost's case. Between the admission form and his sketch it shouldn't take investigators too long to figure out just what the "devil" is.

The pasted on patient name is a matter of simple expediency that, conveniently, is historically acceptable. I wanted everything produced inside Arkham Sanitarium to look like it came from identical models of typewriter, so the tab uses the same "Chunk Type" freeware font used in the PDF's. You can download it from John Bruce's font site over here.

The metal document clip is something I added, but I think I'm going to include one with every folder because it's so handy and official looking.

The sketch actually consumed the most time of any facet of the file. I intentionally patterned it after some of the pictures drawn of the infamous "Mothman" and it took a few tries to get the right look. To the average person it's just an imaginary monster haunting the mind of a crazy man, but to someone familiar with the Mythos...
Posted by Propnomicon at 3:00 AM

Investigators or not, it has to bother the doctors that most people who imagine "the Devil" picture a human form with batwings, horns, and a tail -- but while this appears to have all those appendages, it certainly isn't a human form. Nor is it *vaguely* otherwise. Those six limbs are detailed. There also appear to be sideways-opening mandibles. These are distinctly insectile attributes for a supposedly imagined "devil". Someone's neck hair ought to be twitching a bit.

Looks great (and isn't terrible handwriting a requirement for doctors?)