A commenter left a note that Scribd may be selling copies of some of the older paper props I've posted there. I've noticed a few I've posted no longer show up on my document listing, but wrote it off to a glitch. Before I summon the drama llama and pull everything off the site I'd appreciate any information you might have on the subject.

If you've visited the site, is Scribd selling copies of the files, or has another user copied them and offered them for sale?

Update: As the comments point out it, Scribd is indeed charging for access. 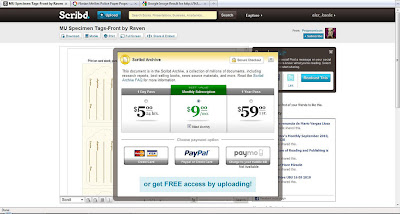 This is unacceptable, but it's ultimately my fault this happened for not paying attention to their terms of service. All of this material was supposed to be free, forever, so I'll be making everything available via Google Docs. That may take some time, so bear with me. It's bad enough that they've hijacked content that should be free, but it really torques me off that they've also taken the hard work of others.

Update: What makes this situation even worse is that Scribd allegedly embraces the use of a Creative Commons license, but then monetizes content that was clearly designated as non-commercial.
Posted by Propnomicon at 1:00 PM

Hi again,
The following link is to a screencap I took:
http://i420.photobucket.com/albums/pp283/anniv111701/scribdscreenshot.jpg?t=1284674269
Basically, in order to download your early work, they make you buy a subscription - 1 day for $5, 1 month for $9, and 1 year for $59.
Don't get me wrong - if you're industrious, you could easily download all your earlier stuff for $5, which is a helluva bargain - your props are always impressive, professional quality and well worth paying for.
Except that the money's not going to you, which kinda ticked me off.
Take care,
Mike

And since the example shown was "...tags by Raven", I'd like to add that this payment demand is news to me too, and without my consent either, since I too meant my pieces to be freely available. (And I'm grateful to Propnomicon both for the inspiration and for the hosting.)

I also have documents on Scribd. I did not realize they had gone to this type of payment plan. I will be watching this closely, and if it turns out the way I fear it will then I am yanking everything and finding a new site to host my stuff.

James Schirmer, also as Scribd user, pointed me to this when I shared this post via Buzz: http://blog.scribd.com/2010/09/02/shedding-light-on-scribd-archives/