This is a bit ranty.

I'm putting together another installment of the Holiday Gift Guide that focuses on prop-heavy books, like the Dennis Wheatley mysteries I've raved about before.  One of the attractions of those dossier-style projects is that they tell a story using a novel mechanism of documents and physical objects.  Spotting the clues and putting them together is fun, but there's a real narrative being built up as the backstory is slowly revealed.  One with engaging characters, interesting twists, and a logical chain of events.

That's something almost totally missing from today's Alternate Reality Games, the spiritual and technological successors to Wheatley's work.  And that's a damn shame. There was a time, not too long ago, when ARGs were filled with possibilities.  They were the perfect venue for bringing interesting stories to life in a multi-media format, a technological embodiment of the epistolary style writers had been using for centuries.

There were hints of what were possible on display during The Beast, the epic tie-in with Kubrick's/Spielberg's "A.I.: Artificial Intelligence", and it's stylistic followup "I Love Bees".   Both games had a massive community of followers dedicated to steadily decoding the bits and bobs of the overall story.  It was a revolutionary approach, but with the benefit of hindsight it's easy to see that the seeds of mediocrity were already being sown.  How?  The increasing reliance on the decoding element of gameplay over the narrative strength of the story.

Today, over a decade later, I can't think of a single ARG that isn't primarily an exercise in cryptography.  Instead of building a strong story game creators are concentrating on ever more obscure encoding schemes.  It's almost risen to the point of self parody.  Discover a website address in viral video.  Visit the website.  Get asked for a password.  Sign up for an email.  Get an email that links to a distorted image.  Try different stenographic techniques to decode the image.  Break the code on the picture to get a phrase, which turns out to be a key for a code imbedded in another email, which gives you access to another webpage that needs a hashtag you can only get by running an audio clip through a spectrum analyzer.  And then, finally, you get access to...a list of corporate officers.

Sweet.  Fancy.  Moses.  What a god awful waste of time.  The player has to jump through multiple hoops and the story has only advanced incrementally, if it all.  It's just like the horrific "grind" that used to characterize online fantasy games.  Bring me ten ghoul ears.  Ding!  Fetch 16 rabbit skins.  Ding!  Lather, rinse, repeat, ad infinitum.

The problem, I think, is the idea that interactivity equals immersiveness.  Designers seem to think that the mere act of tackling ever more elaborate and bizarre encoding schemes means the players are "involved" in the game.  Nothing could be further from the truth.  They're just grinding away, the same way they did when they were a 4th level Wizard hunting spiders in EverQuest.  It's rote busywork carried out solely as a required exercise to get to "the good stuff".  You know, the actual content.  The Story.

Except, sadly, there usually isn't a story.  That's because creating an engaging narrative is a lot harder than running an encryption program.  Developing characters, establishing locations, and nurturing a plot takes time, effort, and skill.  There are vanishingly few people, much less game designers, who can do it well.  Hence the reliance on Ye Old Cryptography Program, because you can pad out even the most inane and amateurish story to epic size by laying on an endless series of passwords, codes, and pointless, illogical puzzles.

I would love to see an ARG that totally rejects the current trend.  Something that returns to the epistolary roots of the genre and tells a story through documents, as Stoker did with "Dracula".  Even better, I'd like it to be grounded in reality and incorporate real historical documents.  If your medium is going to be the internet, use it.  All of those online historical newspaper archives, museum collections, and genealogy databases are an absolute goldmine of material just waiting to be used.

Here's a demonstration of what I think is possible, starting with an actual newspaper clipping. In Firefox you can right click and open the image in a new tab to make the whole easier to read. Just look at how many clues and potential plot hooks are in this single story. Then imagine using faux documents to amplify the story that already exists and take it in a direction the "official" version only hints at. 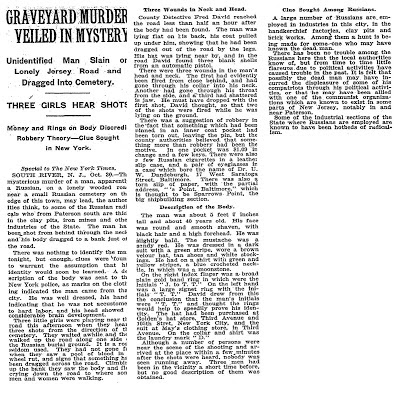 Well said. I think it was Isaac Asimov who once said, “You can’t have good Science Fiction, without first having good fiction.” If not him, then it should have been. In any case the point is without a good story/narrative, all the whiz-bangs and CGI out there can’t prop up a slipshod piece of work. If on top of that you have got to have believable 3d characters that not only grow and work through their problems, but you have to care about them (love or hate them). The main problem out there is that people are producing “product” not literature. A committee nominates a demographic, which is then deciphered to find the hot buttons. A selection of “must have” elements are listed and tossed together with no more interest than a factory made frozen pizza. The only people buying "product" are consumers. What’s lacking in books is … literature. The same goes for games – craftsmanship, backstory, consistency, character, need I go on.

Although it never really morphed into what I would consider a full-fledged ARG (I think there were some severe issues behind the scenes), I think you would have liked the campaign for XCOM (that went by the names Operation Hermes, Project Enemy Unknown, Internal Defense Directorate, Citizen Skywatch). The first iteration of the campaign was filled with a ton of physical evidence from newspaper clippings to vials of sludge. Unfortunately, it seems that the original sites are no longer up, but I did archive a lot of the information on a guide that I was writing at the time.

My biggest problem with ARGs these days are not that they are cryptography heavy (I find those tend to come through beginner grassroots games) but the fact that most large scale campaigns these days tend to go for a more shallow design that appeals to a larger audience and rarely have a deep end that hardcore players can get involved in.

I think you have hit upon one of the key design issues that stall a lot of ARG development, especially for ones that are primarily online.

When you have an online only ARG, you are going up against nearly unlimited mental resources. The challenges you are seeing are writer's attempt to slow down the progress of the story by hindering the players. But as a result it has the affect of alienating many potential players by the sheer difficulty of the steps, few can take for them selves.

I have wanted to run an ARG for quite some time, but instead of a massive online game, something small, exclusive, and physical. Physical props that must be solved/delivered/safeguarded. Clues that must be gathered and solved, possibly from real world locations. The online portion is primarily voyeuristic, watching the story progress, having the ability to provide your insight to those who can't partake in the physical activity.

It's funny that you would revisit this today, as this weekend I was hitting some of your old entries and found one from 2009 that referenced a book called "Personal Effects: Dark Art."

This book has been begging me to buy it at bookcloseouts.com, where it's going for four bucks.

But the link in your entry seals the fate, and highlights the biggest flaw of these new experiments: those "live" web sites and telephone numbers? Someone has to pay to maintain them or they just vanish.

Try visiting http://brinkvalepsychiatric.com , from the book, and you'll get an error. The Wayback Machine has a skeleton of the site, but the graphics and interactive content don't appear.

The book, the mystery and the story, are broken.

But a copy of Wheatley's work? Still as usable today as when it came of the press. Take that, technology!

Rowan's comment about XCOM shows the same flaw: "Unfortunately, it seems that the original sites are no longer up..." The archived information he has is just like looking at someone else's vacation photos. Tantalizing, wonderful vacation photos to a place that you will never be able to visit...