It's been quite some time since Dr. Henry Jones Jr. was at the University of Chicago, but he's still getting mail there.

We don’t really even know how to start this post. Yesterday we received a package addressed to “Henry Walton Jones, Jr.”. We sort-of shrugged it off and put it in our bin of mail for student workers to sort and deliver to the right faculty member— we get the wrong mail a lot.

Little did we know what we were looking at. When our student mail worker snapped out of his finals-tired haze and realized who Dr. Jones was, we were sort of in luck: this package wasn’t meant for a random professor in the Stat department. It is addressed to “Indiana” Jones.

What we know: The package contained an incredibly detailed replica of “University of Chicago Professor” Abner Ravenwood’s journal from Indiana Jones and the Raiders of the Lost Ark. It looks only sort of like this one, but almost exactly like this one, so much so that we thought it might have been the one that was for sale on Ebay had we not seen some telling inconsistencies in cover color and “Ex Libris” page (and distinct lack of sword). The book itself is a bit dusty, and the cover is teal fabric with a red velvet spine, with weathered inserts and many postcards/pictures of Marion Ravenwood (and some cool old replica money) included. It’s clear that it is mostly, but not completely handmade, as although the included paper is weathered all of the “handwriting” and calligraphy lacks the telltale pressure marks of actual handwriting. 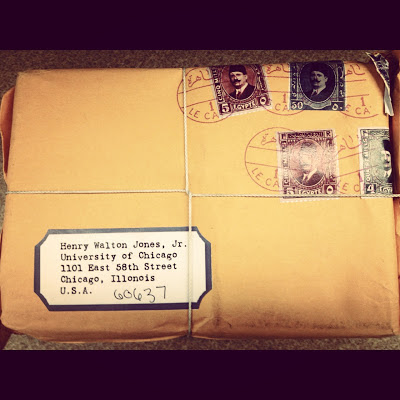 For those of you who want some rare stamps for your prop letters and packages, there is an auction going on with excellent photos of stamps and other material at Samdafayre.com under the Egypt listing. http://www.sandafayre.com/countries/egyptianstamps.html has some Poste Aerienna (air mail) and some nice Graf Zeppelin 1931 overprints, lot 5995, lot 4571 has a rare error showing 1951 as the date for the Graf Zeppelin, rather than 1931! Lot 4572 has an envelope with lot of airmail and Graf Zeppelin stamps – you need only lift the image and change out the address, although the Berlin address make it great Indy material, especially since it is sent from Port Said. You might want to hurry, as I don’t know how long this page will be up once the auction is over.

The added zip with no other explanation from the dead letter office & etc, typical of post-delivered packages. Somebody should have stamped it as being detained, but times are tough now.
13

Wow, I didn't edit that last paragraph very well. What I left off was: Did you see that Christies sold some original Indiana Jones prop material recently: A whip, the Grail Diary and the Grail itself http://coastconfan.blogspot.com/2012/11/indiana-jones-prop-sale-holy-grail-of.html

Awesome!
I want this Package. ^^

Hey thanks for publishing my suggestion!

Turns out, there is a logical explanation for it, and a very funny one at that. The journal was of course created by a prop maker, and part of the prop was a UCHicago address on the address. The book package somehow fell out of its original packaging and the USPS, ever vigilant, delivered it to UChicago.

And here's a link to the eBay auction for the amazing piece, just stuffed with illustrations, photos, and paperwork.