I doubt I have to describe the pleasures of a good book to anyone reading this. That feeling of being transported by a story, of being taken to another place and time, is a sensation I absolutely love. The only drawback is the inevitable shock when you look at the clock and realize you've been reading well into the night. You really, really have to get some sleep...but a few more pages won't hurt. Or another chapter. Or two.

That level of story involvement comes from an author's ability to immerse you in their world. Well crafted prose has an almost magical ability to build up an alternate reality that you inhabit for the length of the story, and sometimes beyond. But words alone aren't the only way to do that.

Over the years there have been a number of writers that have explored the use of prop documents and inserts to help bring their stories to life.  I've taken to calling the result "high touch books", since being given a piece of the author's world is such an important part of the experience.  When done well, with the production quality of the faux paperwork complimenting the actual content, it's incredibly engaging.

The earliest examples are the Crime Dossiers from Dennis Wheatley and J.G. Links.  These were a series of four murder mysteries first produced in the 1930's and since reprinted several times in increasingly less impressive editions.  The defining conceit of the mysteries is that they're actual dossiers containing all the details of a crime, including interview transcripts, crime scene photos, faux telegrams, and physical evidence (like cigarette butts) gathered at scene.  Sadly, the reprints replace all of those nifty inserts with photographs, but they're still great examples of an interactive whodunit. I've sung their praises before, and have since assembled a complete set. 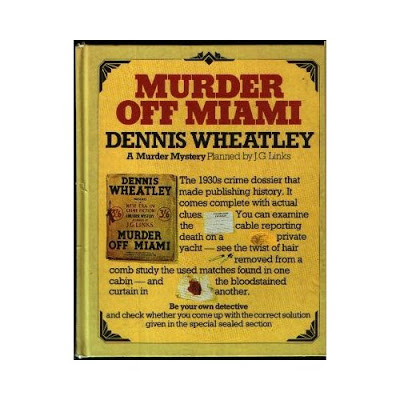 The first dossier in the series is Murder Off Miami , featuring an investigation into the death of Bolitho Blane on a passenger ship.  It was followed by Who Killed Robert Prentice, The Malinsay Massacre, and Herewith the Clues, with a noticeable decline in the quality of the mysteries as the series progressed. If you're going to give them a try I'd suggest starting with Murder Off Miami, since it features the most interesting setup and the best use of the gimmick. You can pick up the reprint edition, along with all the other installments, for pocket change from Amazon's used book section.  Copies of the original issue can be found, but they're a bit pricy.

Next up we have something that should be of particular appeal to Lovecraft fans- Shadows in the Asylum: The Case Files of Dr. Charles Marsh by D. A. Stern. 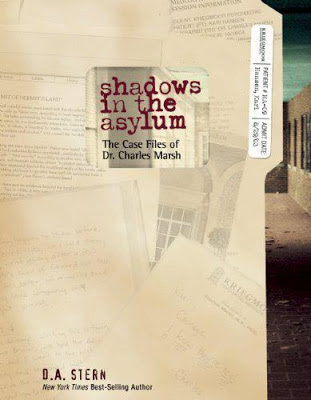 In September of 2004, Dr. Charles Marsh arrived at the Kriegmoor Psychiatric Institute in Bayfield, Wisconsin, anxious to take on his new duties, eager to distance himself from the scandal that had forced him to resign his previous post. Among the patients assigned to Marsh at this time was a young woman named Kari Hansen, a college student who had suffered a nervous collapse during a school-sponsored anthropology dig a year previously. Subsequently, Ms. Hansen began experiencing what hospital records referred to as “a series of vivid hallucinations;” her own words described visions of an “alien” intelligence, a heretofore unknown kind of life form which appeared to her as shadows, often of indeterminate shape, occasionally taking on the form of man. Dr. Marsh came to believe these shadows were real.


This is a real standout. The entire story is told epistolary-style through collected letters, newspaper articles, emails, interview transcripts, scribbled notes, and research reports. What sets it apart is the synergy between the storytelling and the art direction. It strikes just the right balance between moving the story along and the logical constraints of the documentary evidence used to present the narrative. While Stern gets the cover credit I think a great deal of the books effectiveness is thanks to the design work of Matthew De Rhodes. This is a story that builds up the chills with atmosphere, and De Rhodes serves it up in style. 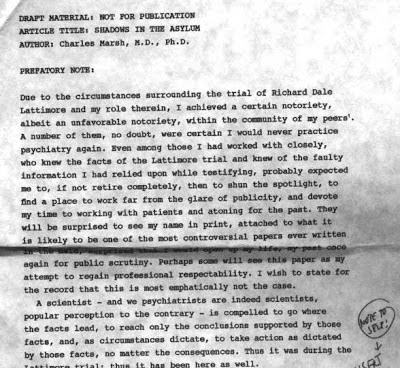 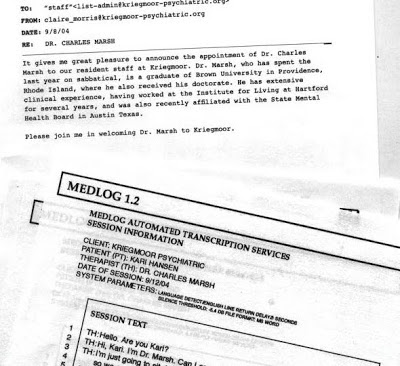 "Shadows in the Asylum" is an entertaining read in and of itself, and on that basis alone it deserves your attention. It's also a nearly perfect example of how to tell an involving story through documents alone. If you're a gamer interested in exploiting prop paperwork to it's maximum the book can serve as a template for your own efforts, including some very subtle examples of how to handle "truth" when dealing with subjective observations. As usual, used copies can be had for a song through Amazon.

I'll have a few more suggestions tomorrow, including the most prop-heavy high touch book of the modern era. You can see the earlier installments of the 2012 Holiday Gift Guide over here.
Posted by Propnomicon at 3:00 AM