Orthaevelve brings us this intriguing artifact from the cult of Cthulhu. The pendant features embellishments of silver and copper on a fossilized shark's tooth, surmounted by a star diopside.

Relics of the cult of Cthulhu rarely make it to the open market. Cultists tend to snatch them up when their previous owners disappear or die messy and undignified deaths. It is certain that this piece will make it into the pockets of a cultist at some point in the future.

This piece was said to be from the personal collection of Captain Obed Marsh of Innsmouth, pocketed by an unscrupulous police officer and subsequently pawned after the officer went insane from nightmares and drowned himself in an aquarium fish tank. The auction house has had several complaints from epileptics that it caused worse than usual seizures in potential buyers who woke tasting ocean water. 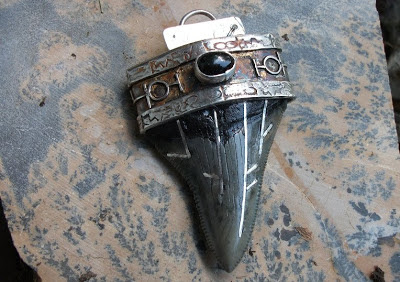 Fossil shark’s teeth make nice pendants and this one is quite nice with the custom language on the mount. The use of a black star diopside with its asymmetric star is appropriate to such a Cthulhu inspired item. What really sets it apart is the channel inlay on the tooth itself, which I have not seen before on a tooth. Overall it’s a subtle piece of work by Orthaevelve.

Ever since I started making jewelry, my goal with my Cthulhu mythos themed pieces was to one day be featured in your blog. This makes my whole year! Thanks also for the compliment as it helps me know what works for future pieces.