Following up on the original tentacle project, I wanted to try making one with "suckers" running along it's length. To make the sucker rings I used 1/2" cabone rings applied while one of the sealing layers of latex was still wet. After that layer dried, effectively serving to glue the rings to the body of the tentacle, I applied another layer of latex to lock them on and then did the final paint job. Here's the result:

I like it, but I don't think I can really recommend this particular approach. While the rings themselves are pretty cheap, $2 for about fifty, applying them took forever. I think it would be considerably faster to use hot glue to attach the rings before applying any latex. Then again, just making the rings from a bead of hot glue would be a lot easier and allow for a more natural variation in the sucker sizes. 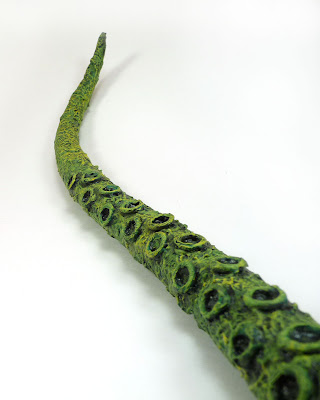 A close-up of the final result. BTW, does anyone where the name "cabone rings" comes from? From Googling I can see that they're a common craft item used in fiber projects, but I couldn't find any information on why they were invented or what they're named after.

Ironically, while I was working on these suckers, Tom Banwell was making some of his own. There's a lot to like about his method, which uses liquid latex cast in a disposable clay mold to produce a very organic, free flowing batch of sucker rings.
Posted by Propnomicon at 3:00 AM

Clearly you and I have some shared interests! I've been making molds and casting resin, latex, plaster, etc for many years, and that is where I tend to go in creating a prop. To make a 3D tentacle I am thinking of sculpting it in plasticene, adding the rings in the same material (take a ball of clay, squish it against the tentacle, use a rounded tool to create the concavity). Then making a two part mold in plaster, filling the mold with liquid latex, letting it dwell for 30 minutes, drying it and demolding. It should make a hollow, somewhat flexible 3D tentacle with lots of detail.

Not sure if this would help but on the film ROCK AND ROLL NIGHTMARE Frank Dietz made his suckers by using Cheerios cereal and glued them to several monsters. Afterwards he coated the Cheerios with latex and paint. It's low tech and cheap but it looked great on film.

From my useless "unconfirmed" knowledge gained from working on TV Craft shows. Cabone is Italian for coal. Coal was sometimes used to make jewelry in olden times such as pendants with a hole in it to hang by.

"Cabone ring" has just become the name for general rings used in crafting. Same way crow quill is for the type metal pen nib although not actually crow quills anymore.

Again, just what I've heard, so don't trust it as fact.

Your "Tentacles: The Suckering!" project was of great interest, as I'm currently working on a tentacle monster costume for Halloween (click my name for the work-in-progress). My goal is to make very bendy, flexible tentacles with free movement. I'm mainly using pool noodles, but haven't decided on the best "skin" to cover the thing with (originally I had planned on using nylons for a flexible, light-weight skin, but am unsure how easy it will be to paint on nylon). I'm curious- how flexible or strechy is your plastic wrap-latex skin?
Thanks for the info and inspiration- your tentacle looks great.

Here's the link to the final monster: