A prop-heavy "Call of Cthulhu" adventure? No, it's a murder mystery from 1936.

A kind emailer dropped me a line over the weekend recommending that I check out the "crime dossiers" produced by Dennis Wheatley and J. G. Links. After reading this description of the concept from a Dennis Wheatley fan site I was hooked:

"What makes the crime dossiers so unique was that they presented the reader with all the evidence that an investigating team of detectives might gather and then ask him to solve the crime. To this end, a variety of physical clues and reports were housed together in a cardboard folder, which if worked through methodically as any detective might, would yield the correct solution to the problem. Having used deduction to arrive at a prime suspect, the reader could then check his findings with the actual solution to the mystery that was concealed within a sealed section towards the rear of the folder.

The physical clues in all four of the dossiers included both real items such as cigarette ends, curls of hair, bloodstained material, 'poison' pills, scene of crime photographs etc. and clever facsimiles of spoof cablegrams, reports, interviews with suspects, handwritten letters and newspaper cuttings. The very complex mysteries presented, required the reader to be a fully engaged and active participant in the investigation rather than merely absorbing a story in a largely passive way as with most detective fiction. There is no narrative as such, the reader provides that himself, by assimilating the facts and assessing the evidence surrounding the case. The result is therefore a curious cross between a work of fiction to be read and a game to be played."

That last line isn't just a description of what the crime files were, but good metric for a successful CoC game, either tabletop or live-action. What I find particularly interesting is that this concept dates back at least to Lovecraft's own lifetime and that it's been more or less used continuously ever since. The first of the Wheatley crime dossiers, "Murder Off Miami", was originally published in 1936, but reproduction and followup editions, including a translation into computer game format, are as recent as the 1990's. 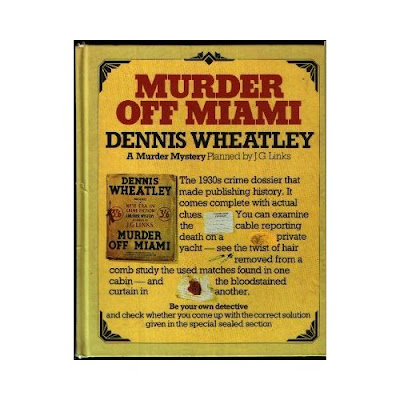 I've ordered one of the repro editions off Amazon (where you can pick them up for a song) and I have a feeling that I'll soon be collecting more examples of this kind of prop-driven storytelling. Thanks to the success of the Wheatley dossiers a number of imitators launched copycat projects and the aforementioned fan page has information on similar items based on the Sherlock Holmes stories.

As an aside, gamers in general may find Dennis Wheatley's other works of unusual interest. He was an avid wargamer that created two published boardgames, "Invasion" and "Blockade", as well as one of the first authors to blend the worlds of espionage and the occult in his novels.
Posted by Propnomicon at 3:00 AM

Hi Everyone
I have 37 hard back books of Dennis Wheatley for sale.
Check out:
http://www.trademe.co.nz/Books/Fiction-literature/Mystery-thriller/Author-VZ/auction-254375966.htm
Thought you might be interested.
Thanks