Yesterday my copy of Dennis Wheatley and J. G. Links' "Murder Off Miami" arrived. I'd discovered their "Crime Dossier" murder mysteries thanks to an email from a Cthulhu aficionado that thought I'd enjoy them, and boy were they right. If this one is any indication of what the rest are like I'm going to have the entire collection by the end of the month.

The one thing I don't like about my reprint copy is that it only has pictures of the props that were included in the original issue. The photographs are nice, but in terms of immersion they can't compare to the impact of physical reproductions. The "Crime Dossier" name is certainly apt, since the entire book is exactly that- a complete dossier of all the information gathered during an investigation into the death of financier Bolitho Blane aboard the luxury yacht "Golden Gull". Here are the documents that set things up in the first few pages: 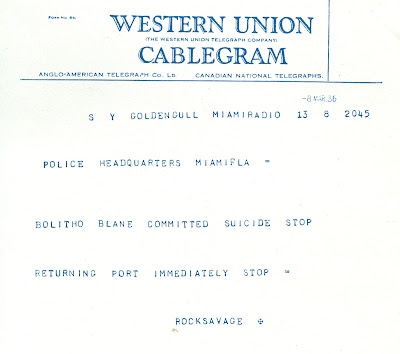 The ship-to-shore telegram informing police of the death. 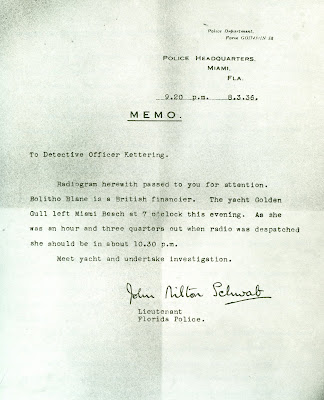 The dispatch memo sending you to investigate. The release version had an actual memo folded up inside the dossier, but this is just a photograph of the original prop.

What follows are pages of typewritten interviews with the people on board the yacht at the time of the "suicide". Not surprisingly, the hunt for a killer begins after clues at the crime scene demonstrate Mr. Blane was murdered, and you're along for the ride. Interspersed with the transciptions of the interviews are everything you'd expect to find in a police file. Pictures of the suspects: 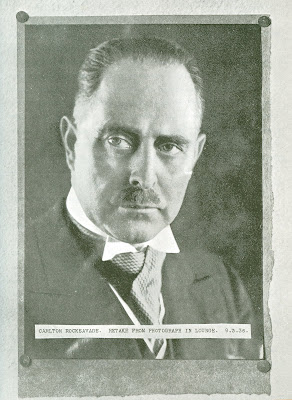 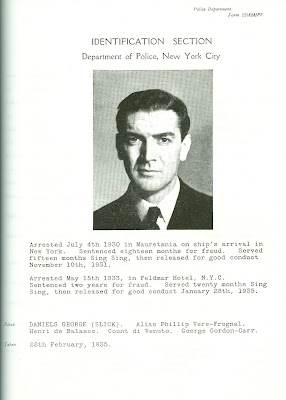 And pictures of the physical evidence that, in the original issue, was actually included in the dossier: 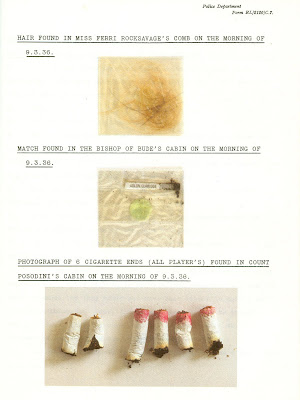 All of which are vitally important to determining who the actual killer is. After digesting all of the interviews, transcripts, photos, and clues you have enough information to finger the murderer. That's when you can open a sealed envelope containing the final solution in the form of one last internal police memo.

It's a brilliant concept made all the more notable by the fact that it's over 70 years old. It's hard not to see Wheatley's crime dossier concept as a direct ancestor of the modern ARG, or Alternate Reality Game, as well as the current approach to "Call of Cthulhu" gaming. There was some cross-fertilization with the mystery and puzzler genre between then and now, but the legacy of creating a believable, highly detailed fictional world with props and in-game documentation is clear to see. More importantly, at least from the perspective of what this blog is all about, it's a template for creating live-action and tabletop CoC adventures that take immersion to the next level. A place where props aren't just world-building devices, but important clues in and of themselves.
Posted by Propnomicon at 3:00 AM

I haven't read through it yet, or started calling any of the phone numbers, but I have spent a few minutes going through all the props that come with the book, and they seems relatively well done.

Be Seeing You,
Hand Of Cthulhu

I have a 1981 copy of "Murder Off Miami." The physical evidence include the hair and matchstick. The cigarette stubs were a B&W photo.

My favorite, not by Wheatley, is the dossier format from 1983, of Conan Doyle's "A Study In Scarlet."