"The Shadow Out of Time" Sandstone Slab

"But what I have to tell is more than this. Two years ago, when I was prospecting about 500 miles east in the desert, I came on a lot of queer pieces of dressed stone perhaps 3 X 2 X 2 feet in size, and weathered and pitted to the very limit."

One of the iconic items from Lovecraft's "The Shadow Out of Time" are the inscribed stone blocks that mark the location of the ancient city. About a week ago I decided that a specimen of the carving on those stones would make a great prop for two reasons. First, it would make a fantastic backdrop for my collection of artifacts from the Miskatonic Australian expedition. Second, since mysterious stone carvings are central to some of the most notable Mythos stories (At the Mountains of Madness, The Whisperer in Darkness, etc.), it would be a good opportunity to figure out how to create realistic depictions of dressed stone.

"Then I met Dr. Boyle, who had read your articles in the Journal of the American Psychological Society, and, in time, happened to mention the stones. He was enormously interested, and became quite excited when I shewed him my snapshots, saying that the stones and the markings were just like those of the masonry you had dreamed about and seen described in legends."

After Googling around a bit it seemed that carving a block of foam insulation would be the most effective way to reproduce the "Shadow Out of Time" slab. Home haunters have been using sheets of construction foam to make tombstones and graveyard markers for years, so it wasn't hard to find useful information. This in-depth tutorial on creating Halloween tombstones by Keeba is one of the best and proved to be an invaluable resource. I also stole some of the techniques used by wargamers to create miniature stone terrain features, like using a long blade to cut natural looking fracture planes out of the stone.

"As a mining engineer, I have some knowledge of geology, and can tell you that these blocks are so ancient they frighten me. They are mostly sandstone and granite, though one is almost certainly made of a queer sort of cement or concrete.

They bear evidence of water action, as if this part of the world had been submerged and come up again after long ages - all since those blocks were made and used. It is a matter of hundreds of thousands of years - or heaven knows how much more. I don't like to think about it."

After hacking out the basic shape from a 2" thick sheet of insulation with a boxcutter I did the final detail work of the carving with an X-Acto knife. In the process I produced a huge amount of blue foam bits that I'm still cleaning up three days later, so if you're intending to attempt a similar project yourself I'd heartily recommend having a good vacuum cleaner on hand. After that I painted the slab with a base coat of dark brown, over painted the brown with a color wash of yellow ocher and dark tan, followed all that up with a black detail wash, and then finished things off by drybrushing the raised areas with antique white. 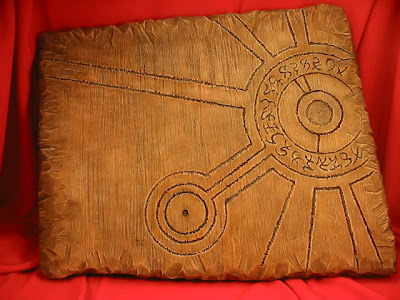 Posted by Propnomicon at 4:51 AM

Labels: The Shadow Out Of Time

Looks good! Appears to have some heft to it, has a nice, aged patina, and the carvings look suitably weird (that's "weird" in the traditional sense of the word). Especially considering it's your first effort, I'd call it a success.

I'm pretty happy with the results, particularly for a first time effort. One of the other nice things about foam is that once you buy a sheet of the stuff you have enough material to keep yourself busy for quite some time.