The Curious Case Of The Mystery Mythos Movie

Memory is a funny thing.

Yesterday I mentioned that that one of my first exposures to the works of Tom Sullivan, and the Mythos as a whole, was via an article in Starlog magazine back in the 70's. I based this assertion on my very distinct memory of reading an article about an independent Cthulhu film when I was a wee lad and this passage from Mr. Sullivan's Myspace page :

"My first significant illustration assignment was creating artwork and maquettes (small sculptures of monsters) for Bill Baetz's The Cry of Cthulhu. My first Lovecraftian film project. I was never paid for anything and the film was never made but Bill got some of my art published in articles about the film in Cinefauntastique and Starlog. I was on the board, so to speak."

Naturally, I assumed one of the articles he mentioned was the one I read all those years ago. A little Googling and I discovered that "The Cry of Cthulhu" was first mentioned in Starlog #6 back in 1977, but I couldn't find a scan of the article in question. Then a very helpful reader emailed this over:

Aha! The missing story on "The Cry of Cthulhu" from Starlog #6!

Except, despite it almost certainly being one of articles Mr. Sullivan is referring to in his recollection, it's not the article I remember reading. My article featured at least two color photographs of creatures that, I assume, were created as armatures for stop-motion animation. Both were clawed, skeletal things that were particularly notable for not having legs- from the waist down they had a segmented tail like an insect. Armed with a little more information, "little" being the key word, some more Googling revealed that some kind of Lovecraft-based film, perhaps "The Cry of Cthulhu", was featured in Starlog #24 from 1979. 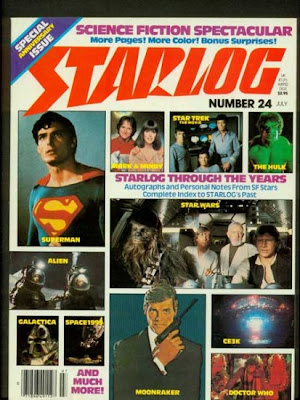 Now I just have to get my hands on that issue, or a scan of the article in question, to determine if it's the one I'm remembering. Or maybe I'm relying on a three decade old memory and obsessing waaaaaaaaaay too much. In my defense, both Mr. Sullivan's sculpts and the ones from my mystery movie would be some of the oldest Mythos props in existence. It's likely they've long since succumbed to age or misfortune, but there's a chance that they're still floating around somewhere.
Posted by Propnomicon at 3:00 AM

So is this the point where I mention that I own exactly two issues of Starlog, and this is one of them? Or that I recall the article as well (including the creepy, fanged little monstrosity you describe that appeared to be crawling across a carpeted floor)? Or that - unfortunately - I pulled out the "Cry of Cthulhu" movie-poster style lead-in page and pinned it to my bedroom wall 25 years ago? Or that the issue in question is buried somewhere deep in the back of a 10x10 storage unit? :P

You've described the exact illustration I remember. There was something about that picture, and the exotic mysteriousness of whoever "Cthulhu" was, that has lodged that story in the back of my mind for almost thirty years.

It's kind of sad that the idealized stereotype of geeky kids obsessively reading and re-reading genre magazines and comics has effectively been killed by the internet.

Unless already found, the article is here: http://www.scribd.com/doc/16564726/Cry-of-Cthulhu-Article

I have been looking for the same thing, finally found it here, exactly as I remember:)

HOLY CRAP! You guys found it!!!

I had the same experience as the original article writer, and the same frustration with the wrong article!

Unfortunately the CRY OF CTHULHU film project ran out of money, time and patience. On the brighter side it is available in the novelization form @ https://www.amazon.com/Cry-Cthulhu-Formerly-Alchemists-Notebook-ebook/dp/B01BLKWOQ0/ref=sr_1_5?ie=UTF8&qid=1490290988&sr=8-5&keywords=byron+craft