Yesterday's post touching on Tom Sullivan's depiction of the Necronomicon in the "Evil Dead" movies, and his subsequent influence on the pop culture conceptions of the dread tome, prompted a kind emailer to point out that Mr. Sullivan has a page on MySpace . Much to my surprise, it seems I was exposed to his work far, far earlier than I had ever assumed. For years I've had clear memories of seeing special effects photos from a Mythos-based film that appeared in Starlog magazine way back in June of 1977. 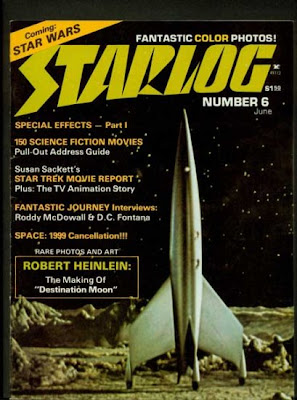 It turns out that Mr. Sullivan sculpted the Cthulhoid critters that helped illustrate a story on "The Cry of Cthulhu", a failed independent film based on Lovecraft's writings. My Google-fu is weak and I can't dig up any scans of the article in question online, but I can still picture it in my mind. Then again, I spent a week reading and re-reading that magazine during a family camping trip when it rained every single day.
Posted by Propnomicon at 3:00 AM