The Curious Case Of The Mystery Mythos Movie: Part Deux

Last week, during a discussion of Tom Sullivan's impact on Mythos art, I mentioned my desire to track down an article about the ill-fated "Cry of Cthulhu" movie he was involved with in the late 70's. Within hours an incredibly helpful reader provided me with a scan of the article from Starlog #24, but I haven't had a chance to do anything with it until today. Here it is. 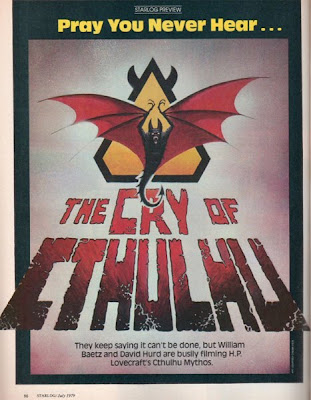 I'm amazed that the two color pictures of the film's special-effects maquettes have been floating around in my brain for thirty years. Then again, after reading the details of the proposed script, including the always classic "young couple discovers their new home has a terrible secret" angle, maybe I justifiably suppressed the text of the article. The script has an...interesting...take on the Mythos. It definitely strays out of the canon quite a bit, but I have a feeling that if the movie had been made it would be a cult classic today. That "cliche be damned", kitchen-sink approach to horror can produce some fun little films, like the original "House" with William Katt.

Oh, one last thing. I'm not a believer in synchronicity, but it is an amusing coincidence that "The Shadow Out of Time" and it's backstory was such an integral part of the "Cry of Cthulhu" screenplay. Is it possible that some dark corner of my mind actually remembered that bit and dredged it up just as I was finishing my own "Shadow Out of Time" project?
Posted by Propnomicon at 3:11 PM

Labels: The Shadow Out Of Time, Tom Sullivan

Awesome! This is exactly how I remembered the photos, complete with the "Pray you never hear..." tagline and the Black Forest location. Heck, just looking at this is starting to awaken long-dormant brain cells containing memories of some of the other articles in that issue...

My significant other pointed out that the photos might be so memorable because, in 1979, they really were quite remarkable. We take for granted how easy it is to compose images like that today, but back then using a miniature set with back-projection to increase the apparent depth of field wasn't a trivial task.

The October 1979 "Special H.P. Lovecraft" issue of Heavy Metal features a 4-page story, The Alchemist's Notebook, by David Hurd and William Baetz, "an excerpt from the novelization of the upcoming movie, The Cry of Cthulhu, from Paramount Pictures (to be released during the summer of 1981.)"

Thanks for posting this. It's been rattling around in my brain, too.