CoastConFan posted some pictures of this wonderful piece from sculptor Michael W. Moses. It's a very stylized departure from the anthropomorphic, anatomically detailed depictions I normally like. The flowing lines and aquatic motifs really capture the kind of strange and curios artifact you would find in a Lovecraft story. The sort of thing that would be on display at the Arkham Historical Society without any real understanding of it's true significance. 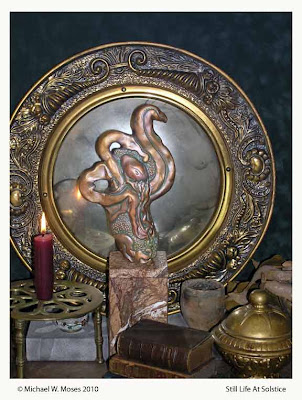 Mr. Moses was kind enough to provide some details about it's creation:

The Chthonian Staff piece was free-formed from fine-grained commercial clay similar to 19th century pipe clay. The fineness of the clay allows for a great deal of detail and reduces shrinkage to a minimum. One side features a Chtulhu figure and the other side has a chaotic design (not of this world) with the jewel as the main focus.

After working the clay to the proper consistence it if formed to the desired shape and left to dry under controlled conditions to avoid cracking due to uneven drying. The opening for the jewel was made taking account shrinkage due to drying and shrinkage during firing taken into account. This type of clay has a shrinkage rate of less than 10%. Once the piece dried to a stiffer state, it was again worked to achieve pebbling and texture. It was left to fully dry under the same stringent conditions until it was quite dry.

In this drier state it is still possible to do further detail work and clean up. The piece was fired at 1800 to 2000 degrees. After the piece cooled it was in the bisque state and could only be worked with a dremel. The staff head was painted with commercial quality under glazes such as made by Duncan. A combination of bronze, gold and copper was layered to give an effect of a bronze artifact. Michael used overlapping layers of semi translucent glaze to blend the highlights into the piece. This piece was not over glazed so that it would not be too shiny.

The piece was fired a second time at the same temperature to set the glaze. Once it cooled down, acrylic paints were subtly added to give the object the appearance of old bronze. A wash of green simulated verdigris or the vestiges or the remains of removed patination. The 1940s aurora borealis jewel was selected for the weird colors and the light refraction and reflection. It was set in with industrial bond, i.e. Liquid Nails.

A stone base was added to display the staff piece. The base was a found item, I don’t know what type of stone it is. The overall piece without the stand is nine inches overall, four ½ inches wide and about an inch thick. The base of the staff piece is stamped “Michael Moses original”. It is a one of a kind piece. The print Still Life at Solstice is available for sale as is the original staff piece.

Head on over to CoastConFan's blog for more pictures, and you can find more work from Mr. Moses at his Myspace pagec or Flickr account.
Posted by Propnomicon at 3:00 AM

I did some research and determined the base for the Chtulhu staff piece is made of variegated serpentine with steatite.