“Among the many strange and curious artifacts in the personal collection of Dr. James Killian this small idol is possibly the most enigmatic and peculiar. Discovered in Rome in 1830 by Killian it appears to depict the mysterious tentacled god Cthulhu.

According to Killian’s journal the idol was unearthed among pottery shards from the 1st century A.D. and is cast in bronze, typical of ancient Roman artisans of the time. What is not typical however, is the idol’s subject. Killian had never encountered a depiction of this particular deity before and noted that it had a strange effect on certain people. Killian’s journal does not elaborate any further on this “effect” however the crate that Killian stored the idol in had the words “DANGEROUS: HANDLE WITH EXTREME CARE” stenciled on the side.

Modern examination and analysis on the idol have produced inconclusive results.” 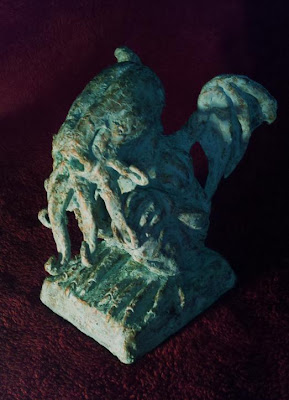 The piece is available for purchase on Ebay.
Posted by Propnomicon at 3:00 AM

Another winner! Love the skull-like face. Looks like something that was dredged up from the sea bed after a millenia or so.

Nice patination, with hints of bronze showing through. The sense of wear is also good. However, the patina is a bit bright for a dug bronze artifact, as brightness indicates active, possibly recent oxidation and probably chemical. Bright oxidation is generally a warning flag to dealers in dug artifacts.

Otherwise excellent work, especially for application on Sculpy. Your modeling is pretty much spot-on for small bronze objects.