I've long thought that both tabletop and live-action games could benefit from embracing the techniques used by magicians, particularly the parlor and "bizarre magic" branches of the craft. Parlor magic, with it's emphasis on close-up illusions suitable for a small group around a table, seems tailor made for the typical game environment. The more theatrical and storytelling driven style of bizarre magic takes much of what makes parlor magic a useful resource and kicks it up a notch, putting the illusions in service to the narrative.

Props play an important part in both branches. At one level the objects used by a magician are just the tools of the trade, the mechanical parts needed to perform an illusion. At another level they're a way of bringing more immersiveness and entertainment value to the performance. When a magician pulls three plastic beer cups and a handful of rubber balls from his jacket you're going to get one kind of show. When he removes three Egyptian embalming vessels carved from alabaster from a mouldy, age-stained trunk, followed by plucking an assortment of dessicated and preserved baboon hearts from a funerary box, you're getting a very different show.

All other things being equal, from the quality of the patter to the execution of the illusion, I suspect most people would rather watch the guy doing the freaky trick with the baboon hearts. At a fundamental level it's still the ol' cups and balls gag, but the presentation is far more memorable.

All that is my long-winded way of saying why you might want to spend some time over here at the Dragonskull bizarre magic site. The section I'm linking to is all about props, from advice on turning ordinary objects into extraordinary props to directions for crafting gaffed items that anyone can use to produce some truly memorable effects. Some of the work pictured is cruder than the occult art objects I normally feature, but the DIY information and construction tips are invaluable.

If you don't have time to browse the entire collection of articles there are a few in particular I would recommend. The first is this one on using epoxy putty to tart up simple, off the shelf items into something more impressive. 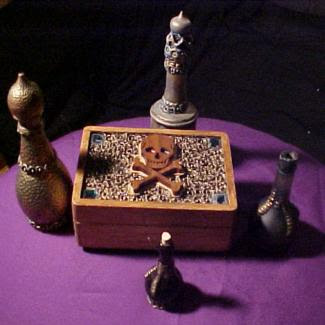 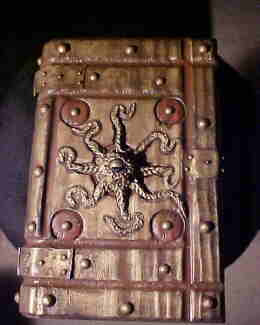 The second is this one on crafting storage books and boxes. It's amazing what can be accomplished with a little epoxy putty and some paint. 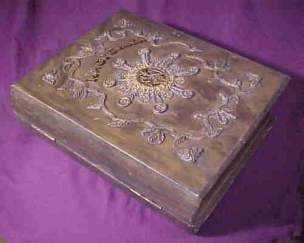 Finally, this article on making a self-opening box should set your mental gears a turnin' with possibilities. 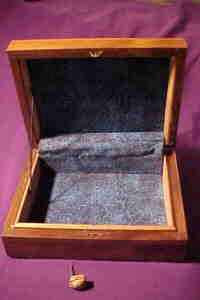 Thanks for this fantastic link! definitively worth bookmarking.