I don't usually feature items on Ebay, but when Nick Storm sent over the listing for this Bronze Scorpion Phurpa Statue I was immediately struck by just how creepy looking it actually is. It's so...alien. I couldn't get past the impression that as soon as you wrapped your hand around it all those segmented legs would wrap themselves around you. 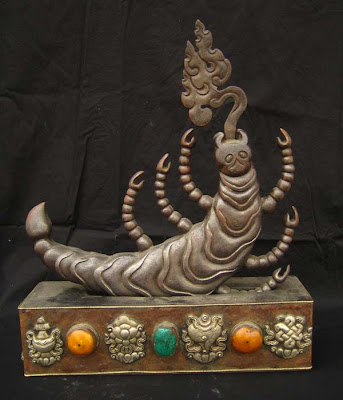 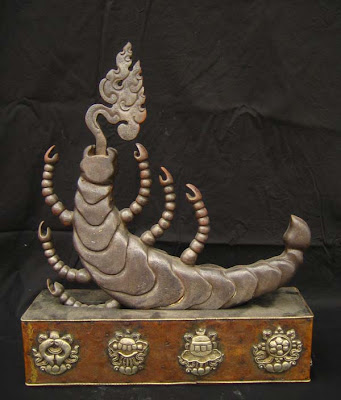 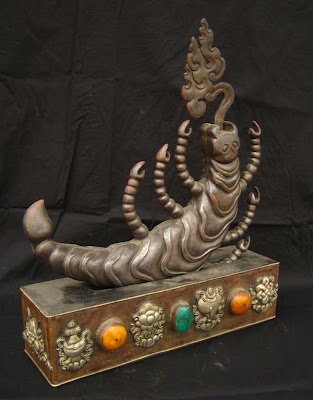 I was also a bit uneasy at the idea of using an actual religious article as a prop. Followed immediately by the realization that although I felt discomfort with the idea of using a Buddhist item as a faux artifact I've never given a second thought to using crucifixes, holy water bottles, or communion wafers in the same way. I adore vampire killing kits filled with all kinds of Roman Catholic paraphernalia, despite that particular use of those symbols being potentially offensive to followers of the faith.
Posted by Propnomicon at 3:00 AM

I'm a semi-practicing Western Buddhist and this doesn't bother me a bit... and I don't think it would bother Eastern Buddhists either.

Interesting....the first time I have EVER seen the ethical considering of religious items used in gaming brought up.

I certainly never intended any sacrilege. I actually look at the borrowing of props from anywhere as purely artistic in nature. I realize that the vampire stuff and it's catholic association is unavoidable but to me, that Buddhist scorpian was as Oakree so aptly put it, "other worldy or alien".

Thanks for posting that. I was just leery of opening up a can of worms.

The weird thing is that this is the first time the thought crossed my mind as well. It just struck me as odd that I would even think of it after shamelessly using other religious/spiritual items from Pagan, Wiccan, and Christian belief systems for years. That said, the phurpa would make an amazing prop.

Be an equal opportunity offender of religions. If you are willing to trivialize (or mock?) Catholic and other Christian artifacts, then I say go ahead and do the same with Buddhist or other faiths. To say that you are only willing to trivialize/spoof Christian paraphernalia, but not other religions, would actually be more of an insult to practicing Christians. At least, if you treat all faiths with equal regard/disregard, then you can say to everyone "Hey, it's just a damn game, and religiosity is not being questioned here, they're just game props, so chill out and don't take it personally."