Rev. Marx has an interesting post on creating your own inks out of walnut hulls and pokeweed. His detailed look at the process even has a death defying climax involving potential pokeweed poisoning.

Black Walnut Ink is a deep brown almost sepia tone water based ink made from the rotted hulls (the green fleshy casing around the nut) of black walnuts. There are plenty of web sites out there that talk about how to make Black Walnut Ink. And most of them do it slightly differently. Most advocated collecting black walnuts (still in the hull) off the ground and allowing them to rot and soak for several weeks. While I do have black walnut trees in my area, I did not want to wait several weeks, endure the smell of rotting hulls, or ruin a large pot to have them soak in (it is recommended that you not cook in a pot after using it for this as it is poisonous to humans). It just so happened that I had recently purchased some dried and powdered black walnut hulls from my herb supplier. I don't even know why I had ordered them. Call it kismet. 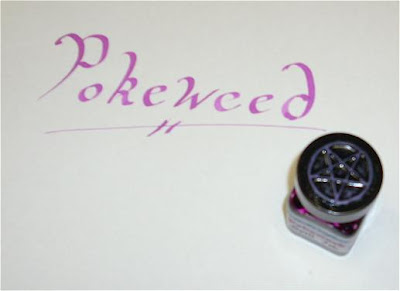 I don't know about death defying, but it certainly did cause me some serious concern at the time. I was also really pissed that I lost a quarter of a quart of really good ink!

Having heard that the berries can ferment on the vine, she didn't add yeast, just let wild yeast from the air ferment the mash, and was happy with the result... since she wasn't planning to drink the stuff.

But this was a lesser-scale project: four small bottles.