While doing some research on the Lindbergh kidnapping I came across two interesting investigative techniques, at least from the standpoint of propmaking.

The first involves how physical evidence at a crime scene was collected and stored. The science of forensic investigation was just developing in the 20's and 30's and it was common for items to be "bagged and tagged" in regular brown paper bags and cardboard boxes. While my familiarity with period police work is admittedly limited, the Lindbergh case is the first one I've come across where evidence, in this case human remains and items from the immediate scene, was stored in glass bottles: 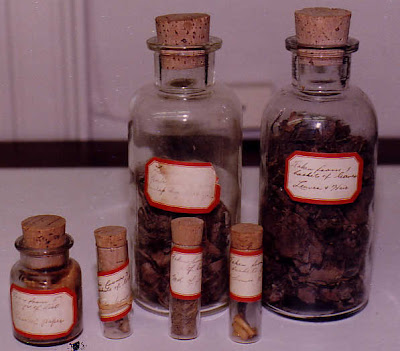 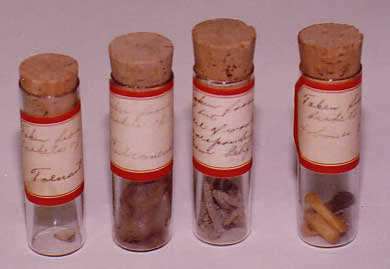 The second involves the use of silver nitrate to highlight fingerprints that were unrecoverable using traditional powder techniques. It sounds like something from "CSI", and a refined version of the technique is indeed used today, but it dates back to the start of the 20th century:

Early documentation reveals that the silver nitrate process was developed in the 1910's. In 1918, the IAI Conference gave a presentation on this process. Different people were experimenting with it but it's development is historically credited to Dr. Erastus Mead Hudson. The silver nitrate process became well known after Dr. Hudson recovered latent prints on a ladder used in the Lindbergh kidnapping case (1932). In later years, Dr. Hudson did additional research with the New York Police Department exploring other possible uses for the silver nitrate process, such as recovering latent prints from cloth and gloves.
Finger Print and Identification Magazine, Vol. 17, No. 3, September 1935. The Federal Bureau of Investigation has also taken credit for the development of silver nitrate. They claim that it was first used in 1933 in the William Hamm kidnapping case (the president of the Hamm Brewing Company).

As a point of knowledge, paper bags and boxes are used today and in yesteryear to prevent deterioration. Paper products allow moisture to dry instead of contributing to rot. If a liquid is being preserved a glass container or a metal container like a paint can is used. Tissue samples usually become the realm of medical personnel and are preserved in various preserving liquids. Exceptions are sometimes made on a case by case basis.

My name is Richard Hudson Koehler and I want to thank you for correctly giving credit to my grandfather, Dr. Erastus Mead Hudson, for getting fingerprints off not just the Lindbergh baby’s wooden toys, but also off the ladder that was used in the kidnapping. Unfortunately, when the case came to trial, the prosecution refused to present the evidence that none of the fingerprints my grandfather obtained off of the ladder matched those of the accused, Bruno Richard Hauptmann. Because of that, whereas prior to the trial my grandfather was going to testify for the prosecution, he decided to testify on the side of The defense counsel for Mr. Hauptmann. It’s hard today to imagine how unpopular a decision that was, but suffice it to say it essentially destroyed his career which had been as a very esteemed physician in downtown Manhattan.
And worst of all, As a result of a trial that by today’s standards would be considered an absolute circus of injustice, Hauptmann was electrocuted on April 3, 1936.

Even though he died before I was born, my grandfather,Because of his courage to “Walk into the lions den” has always been a hero in my mind.
Thanks again very much, Richard Hudson Koehler M.D.