Following up on this week's post on formulas for scenic blood, Ryan Voss of Dubious Creative Studio sent over a fantastic tutorial on creating washable stage blood. This would be ideal for live action events and performances, including Halloween parties.

I am half of a theatre props/effects team, my wife being the other half, and not that long ago we were called upon for a show that used copious amounts of blood and gore. Unfortunately, the director had a very difficult requirement; one of the characters was to be stabbed, onstage, while wearing a real white wedding dress that had to be spotless at the beginning of the next show. Having yet to find a commercial blood that both looks acceptably real and doesn't stain everything it touches, my wife set out to invent one. The results were nothing short of spectacular; her mother actually fainted during the show, and at MOST the recipe requires soap and water to completely wash out. Washable blood is a niche product, but very useful for actors who want to wear their own clothes without ruining them. It is also non-toxic enough to put in your mouth, although it tastes terrible, and if you buy the bulk marker packs it's almost as cheap as the McKormick's and Karo syrup recipes.

Directions:
Put the water in a saucepan. Crack open all the markers and remove the felt ink reservoirs from inside them; squeeze as much of the ink as you can from all of the red markers (pliers help) into the water. Squeeze a couple drops of blue or green ink in, and a couple drops of brown. Stir in cocoa powder. Adjust the mix as you desire for color (the amounts given here should give you approximately the right color, but are not exact). Put the saucepan on the stove over medium heat. When the mix begins to boil, whisk in corn starch a little at a time until you achieve the desired thickness (you can make it more gelatinous for scabbing wounds and such, or leave it relatively thin for blood), then remove from heat. Once cooled, it is ready to use.

I've attached a production photo from an indy film we worked on a while ago that used this blood. 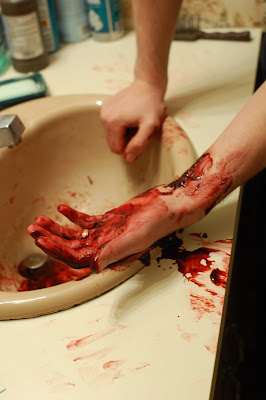 Sweet fancy Moses, that looks incredible. All the picture needs is a straight razor in the background hand to really sell the effect.
Posted by Propnomicon at 3:00 AM

Now for those of you who want to make vintage black and white films or photos, you can use what was used for decades in film to simulate blood: chocolate syrup. Here are some links to sites that go into detail: http://www.theatlantic.com/technology/archive/2010/10/old-weird-tech-blood-for-black-and-white-films/65360/ and http://www.effectsportal.net/index.php/fake-blood/
and http://www.sickindividual.com/tipblood.html and http://en.wikipedia.org/wiki/Chocolate_syrup . The nice thing is that you can use it on your ice cream too!

CCF - Sweet! Now I can finally do that b&w film about gory desert toppings that I've been dying to make since High School! ;)

Great work. Thank you for posting and for sharing with Eric Hart. Now in my "toolbox".

How long will this recipe "keep"? We are doing a mock disaster at girls camp and I will need to make it ahead of time and bring it up. Thank you so much!!!!

Nice! How much blood will this make? I need two people to get shot once a day for a week...

I keep it it refregirator for 2 to 3 weeks before it went bad.. I stir it a bit and reheated it a bit. Gets darker with time though

I keep it it refregirator for 2 to 3 weeks before it went bad.. I stir it a bit and reheated it a bit. Gets darker with time though

How much does this make?

Hey i am trying to make this for my high school production of hamlet, and when i add the corn starch, it just clumps together and doesn't mix with the water and ink. Any suggestions?