Call of Duty: From Beyond

A new piece of concept art for "Call of Duty: Modern Warfare 3" was released a few days ago. While I'm a big CoD fan it's obviously not something within the normal purview of Propnomicon- except for the curious warning sign in the lower right hand corner of the preview shot. 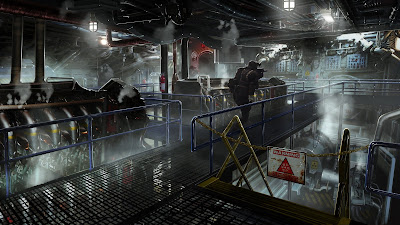 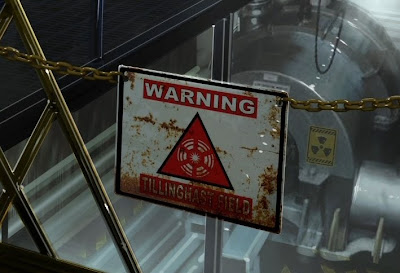 It's my Tillinghast Field warning sign . That's pretty cool, even if it's just something the developers used to jazz up the shot.

It would be even better if a Tillinghast Illuminator actually figures into the storyline in some way. The Modern Warfare series has had a very Tom Clancy-ish techno-thriller vibe up to this point, consciously avoiding the survival horror and and outright science fiction plotlines used by some of it's fellow first person shooters. Given that the warning sign appears in a ship's engine room I wonder if the scene is connected with the Philadelphia Experiment ? I'm geeking out at the thought of being able to travel in time from a Modern Warfare scenario into a Call of Duty mission involving the WWII Tillinghast experiments at the Philadelphia Naval Yard and the Nazi "Black Sun" installation.
Posted by Propnomicon at 3:00 AM

Well, Treyarch's Call od Duty WaW and Black Ops does make use of such technology and plotlines in their Nazi Zombies game modes. You should check them out. While not related really to Tillinghast, they do use alot of Black Sun/Die Glocke/Vril type stuff like you would see in Wolfenstien or such.