In the early weeks of 1912 a monster stalked the bayous of southern Louisiana.

The first sign that something was wrong were the disappearances. Over the years more than a few people had gone for a walk outside of town, wandered off the road, and vanished into thin air. Tragic, yes, but not unexpected given the confusing and unpredictable nature of the swamps. The latest cases were different, people who had spent their whole lives in the backwoods making a living from hunting, fishing, and farming. Still, folks didn't think too much of it.

Then the first bodies were found, not in a ditch or floating in a stream, but in their homes. It took a while to even figure out how many people had been killed because the parts from so many bodies were jumbled up. Once everything was sorted out, and even hard men were brought low by that job, five people were dead. Someone had walked into the house, slaughtered everyone, and then dismembered their bodies with a very, very sharp axe.

A week later they did it again, this time in a town 26 miles down the road. Two weeks after that they walked in to a house over 40 miles away and did the exact same thing.

The monster's name was Auguste Delagrange, and the killing didn't stop until a priest and a voodoo man drove a stake through his heart.


Yeah, it's a terribly melodramatic way to start a post, but one of the reasons I'm so happy with this project is the back story built into it. That introduction? It's all absolutely true except for the last line.

Here's the final presentation for the mummified vampire heart. The box is solid oak, finger jointed, and probably dates back to the 1940's. When I bought it at an antique shop it had a ragged leather handle and was covered in paint stains, so I'm guessing it was originally a toolbox or artists supply box. The plaque is an antique oak picture frame. The entire box has been aged with the tinted wax treatment I discussed yesterday. 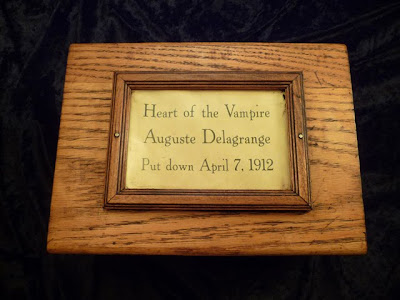 Inside we have the dessicated ticker of the unfortunate Mr. Delagrange and the stake that did him in, resting on a bed of period appropriate excelsior made from real wood shavings. I liked the contrast provided by the light colored excelsior so I didn't apply any distressing.

The stake is my idea of what a real vampire killer would use. Something with the slim profile and sharp point of a dagger designed to slip between the ribs of the chest cavity. Those big honking garden stakes you see in most vampire killing kits drive me crazy. You would have to expend way too much effort to crack through the ribs because the points are so shallow and broad. This stake is another antique- a pattern 1, World War 1 tent stake turned on a lathe from solid oak. The typewritten note on the inside of the lid explains the history of the heart. 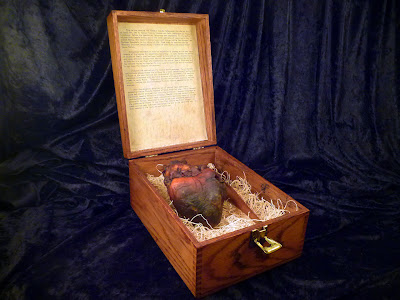 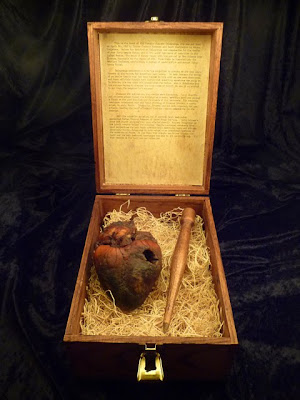 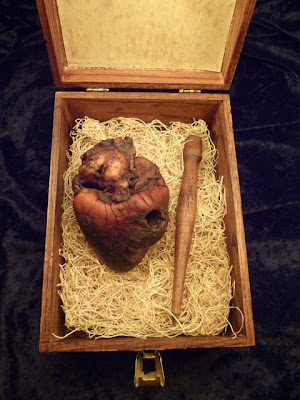 If you've always wanted to own a little piece of vampiric history you'll be happy to learn that the mummified vampire heart and all it's accoutrements are available on Ebay, just in time for the holidays.
Posted by Propnomicon at 3:00 AM

This is GREAT! I love the attention to detail.

Tremendous!
Even though I know it's not real, it still makes me not want to touch the thing.
The whole package works very well, a great piece.

This is just an incomparable piece. It's beautiful. I really can't find words. I have wanted it since you first posted about it, and now . . . gah. I think there's something in my eye.

Sent my LJ horde your way; I hope that you get some sweet bids on this piece. It's worth way more than the minimum bid.

Thank you all for the very kind words, they're most appreciated.

Wait.. so the story is true, excpet for the *end* ?? Where did you find this story? And what is the *real* end to it?

Can you drop me an email? I couldn't find your email address in your profile.

I apologize for being so maddingly vague in public, but I don't want to taint the Google results for the subject with too many pointers here.

It turned out amazing! It's been really cool to see the progress through the three posts.

Just for your information, the vampire organ is not real. It is coated with wax and its texture is very dry, which will misleads people thinking that it is a real mummified heart. The bid closing date is Dec 13, 201020:30:57 PST. So far there were 20 bids and the highest bid price as at now is $256.72.

OMG, you just ruined my day. It's not a real Vampire heart?

LOL, found a picture of your prop on Buzzlamp with the title of "Glimpse into our amazing past with these historic photos"
http://buzzlamp.com/glimpse-amazing-past-historic-photos/38/

Wait so vampires are real?!?!
Are they still around?

I was bored and looking through one of those Yahoo links (Rare Never Seen Historical Photos) and found this about halfway through the run (along with such gems as a photo of a Nazi parade labeled as "General Patton's dog").

i found this video which purports to tell the "full story":

The mummified heart of Auguste Delagrange

I'm quite impressed at the quality of this project. Very well done. You are, without a doubt, a talented artist. I'm also really impressed at how long it took me to find your website and verify that it was, indeed, a fake. Nearly an hour, and I'm quite a competent researcher. I see that that was a deliberate act, and I wanted to congratulate you all around. Beautiful and fascinating piece! At the mere sight and idea of it, I was compelled to scour the internet until I found solid confirmation that it was real, or fake. The first TEN NEWS SITES I was linked to had published short articles using your storyline as factual information. Apparently they stopped looking into it when they decided enough other writers had written on it. That's my favorite part. You created an urban legend/myth/holy grail fable that has carried for over 6 years and been picked up by a number of bloggers and journalists. You so effectively obscured your site from would-be mythbusters that it tricked people that just research stuff online all day (or you so enamored them with your imagination and art that they would rather help you build the mythology than debunk it).You are a boss. Thank you for exciting my curiosity and gifting me this little adventure! Thank you thank you thank you! :-)

Very interesting. Where did you find the 'back story' for this? If it's a true story, I'm interested in knowing more.

I read this and imagined the voice of Sir David Attenborourgh