2010 has been a very good year for Propnomicon.

As the blog enters it's fourth year I wanted to thank you for making it a success on a variety of levels. First off, readership has been steadily climbing throughout the year. I was overjoyed last December when the site had just under 15K visitors for the month and was averaging around 500 unique visitors a day. As the Sitemeter traffic graph demonstrates, those numbers have nearly doubled for this month.

I'm well aware that in the big picture these are modest numbers, akin to a single post on a mainstream celebrity or tech news website, but for a tiny little niche like mine they're phenomenal. Particularly when compared to where they were back in 2009. One a good day the blog now receives the same number of visitors it had for the entire month of December in 2008.

Here's a look at the most popular posts for the year according to Google metrics. I didn't turn on these stats until July of this year, but the relative traffic amounts generated by various subjects should be a valid indicator of interest. 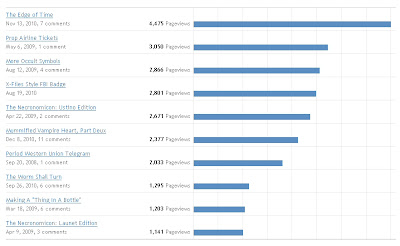 Compare that list with the traffic graphs and the huge traffic spike in November 2010 becomes more understandable. It's almost all thanks to a post on paper aging that was linked to by Make Magazine. I'm not complaining mind you, but it's strange that a subject like that would generate so much interest.
Posted by Propnomicon at 3:00 AM

Links are a good thing.

Gratz on the success. Man four years. I hope I can go on that long.

Here's to a much deserved success and to a happy new year!