In response to my mention of the "Pickman's Model" ghoul costume from "Night Gallery" being reused by the Bob Burns Halloween Show, a kind reader sent along this scan. It's from the November 27th, 1971 issue of TV Guide and includes some detailed pictures of the costume's creation for the episode. 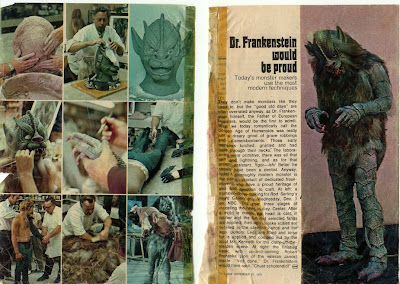 As I mentioned before, it appears that the the ghoul costume incorporates the arms and legs of the ornate Gillman costume from "Creature from the Black Lagoon" and it's sequels. Based on the information in the article it wasn't a direct case of recycling, using a set of the original arms and legs, but a reuse of the original molds for the scales that formed the skin of the Gillman. The Night Gallery crew appears to have cast new appliances using those molds and then glued them to the spandex body suit that forms the base of the ghoul costume.

You can view Night Gallery's adaptation of H. P. Lovecraft's "Pickman's Model" on Hulu.
Posted by Propnomicon at 3:00 AM