The gifted Patrick Reilly brings us this very nice Blomberg-style vampire hunting kit. I really like the intricate compartmentalization, which includes the kind of restraints you would find in a real case. That's a detail that a lot of kit creaters overlook. Loose bottles and tools are a giveaway the project was only meant to look good without any regard for it's actual usefullness.

Supposedly these types of kits were produced during the 19th century for those traveling to Europe. Either there was a belief in vampires back then, or they were simply made as a novelty for European travelers. Although many of these kits reside in museums, some claim they are all fakes (produced in the 20th century). Some claim that they were indeed around during the 19th century. Either way, I thought it was a pretty cool conversation piece to I decided to try my hand at making one. 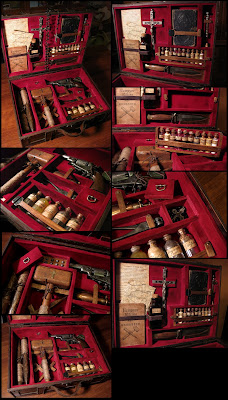 I have that same cross! I've had it in my room since I was a little kid, maybe 5 or 6 years old. I also have a very very similar looking bible, from the same time period. Mine is in German.

Shiny! sooooooo shiny.Glad they put the effort into recreating one.