In “The Tale of Satampra Zeiros” an idol of Tsathoggua is described as follows:
He was very squat and pot-bellied, his head was more like a monstrous toad than a deity, and his whole body was covered with an imitation of short fur, giving somehow a vague sensation of both the bat and the sloth. His sleepy lids were half-lowered over his globular eyes; and the tip of a queer tongue issued from his fat mouth.

Later, in Smith's "The Seven Geases" (1933), Tsathoggua is described again:
In that secret cave in the bowels of Voormithadreth…abides from eldermost eons the god Tsathoggua. You shall know Tsathoggua by his great girth and his batlike furriness and the look of a sleepy black toad which he has eternally. He will rise not from his place, even in the ravening of hunger, but will wait in divine slothfulness for the sacrifice. 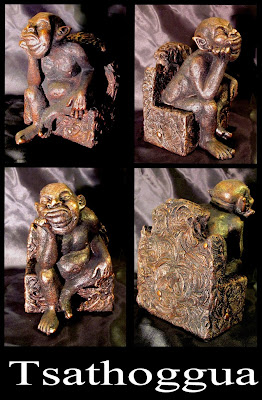 Very cool. 'Divine slothfulness' sounds like a Saturday for me.

That’s an enjoyable and accurate figure. I am somehow reminded of the delightful Lord Dunsany story, Chu-Bu and Sheemish, who were a pair of feuding idols. The story is available on line.