The Necronomicon: America's Most Wanted Edition

Twenty years ago a group of crazed cultists inspired by the Necronomicon raped and murdered a young woman just a short drive from my home.

No, this isn't fiction, but it's also not the whole story. I wanted to talk about it a bit because the case will be featured on Fox's "America's Most Wanted" television show this weekend. I'm not sure how much the Necronomicon angle will be played up, but the book, presumably the Simon version, has been a feature of whispered rumors for years. Now it appears there might be a grain of truth to it. 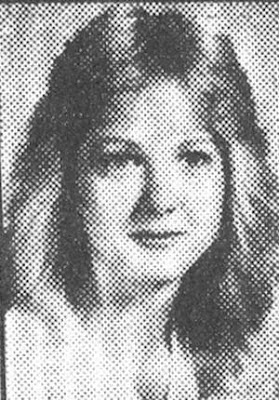 In the fall of 1985 the body of Kimberly Simon was discovered in a wooded area near the Mohawk River in the village of Whitestown. Eventually, after a long investigation, 19 year-old Steven Barnes was arrested, tried, and convicted of killing her based on circumstantial and some physical evidence. A man matching his description was seen with Simon the night of the killing and an imprint that allegedly matched her jeans was found in the dirt in the bed of his pickup truck. During the trial, and in the decades he spent in prison, Barnes continued to insist he was innocent.

In the years since the murder rumors have floated through the area that Simon's death was the culmination of a Satanic ritual. Not suprisingly, the details of the "ceremony" and the people involved varied in the telling, but that just added to the story's novelty as it made it's way back and forth through the small towns of upstate New York. Keep in mind that the killing occured at the height of the 80's satanic cult scare when a plethora of horrific crimes, including the high-profile McMartin preschool case, were filling the media with nightmarish scenarios involving a massive cult conspiracy.

When you're a kid a story like that is pure gold, just the kind of spooky tale that's perfect for sleepovers and campfires. I've probably heard it told two dozen times over the last 20 years, and the versions that mentioned the Necronomicon as some kind of dark bible never struck me as a particularly believable part of the tale. Dark rituals from a fake book of forbidden knowledge? Crazed satanists offering up human sacrifices? A hidden cabal of killers that are still loose?

Then it turned out that Steven Barnes was telling the truth all these years. During the original trial the primitive tissue testing technology of the time was inconclusive in identifying samples collected from Simon's body. That changed in the fall of 2008, when modern DNA tests sponsored by The Innocence Project proved Barnes was innocent. Not only was he exonerated, but investigators reopened the case when the testing revealed that the samples collected back in 1985 came from two men and one woman.

For the first time there was actual evidence showing that multiple people had contact with Simon's nude body. That generated a whole new series of ritualistic murder stories, and the rumors started to feature identifiable names.

Yesterday, the other shoe dropped. Not only do investigators think that self-styled Satanists were involved in the killing, but one of the men rumored to be part of it, Richard W. Miller Jr., appears to have taken his own life as he became their focus.

Shedding more light on what might have happened is attorney Edward Kaminski, who described in an interview his talk with Miller Jr. in the late 1980s. Kaminski was representing Barnes at the time, the Marcy man who was wrongfully charged with and convicted of killing Simon. Barnes would serve nearly 20 years in state prison before being freed in November 2008.

On Monday, Kaminski recalled talking about Simon’s death with a morbid Miller Jr. while they stood in the dark outside a Utica supermarket. As Miller Jr. repeatedly fingered a butterfly knife, he seemed to laugh as he spoke of boiling cat skulls on the stove and strangling a man with piano wire, Kaminski recalled.

“All he started talking about was death and killing, and he was consumed with the thought of killing as a general premise, and he carried around this ‘Book of Death,’” Kaminski said. “All I knew is that I was checking all my locks twice at my office and my house.”

I think the "Book of Death" in the above quote is quite likely the Necronomicon that appeared in the whispered campfire tales of my youth. Was it an actual copy of the Simon Necronomicon, or some kind of home-made version? Frankly, I have no idea, but I'm amazed that the fantastic story I've heard all these years turns out to have a basis in fact. A bunch of kids playing at the occult end up committing murder and keep it a secret for twenty years? That's the kind of thing that only happens in movies, not in real life. Miller's rumored suicide is right out of the final act of a horror film, the kind of thing that happens right before a montage of weeping, middle-aged suspects being led away from their homes in handcuffs.

The "America's Most Wanted" segment about the Simon killing airs this Saturday night.
Posted by Propnomicon at 6:38 AM

... and our sane and rational and ponderously just system responds by depriving yet another innocent person of nearly twenty years of his life, while leaving the actual rapists and killers free to do who-knows-what-they-did-in-the-meantime....

Yes, I am so very reassured by the sanity and rationality and the sheer justice of it all.

All that was missing was for a death sentence to have been imposed instead and executed before his innocence was belatedly discovered, which had happened to others such as Jesse Tafero.

In Illinois, Rolando Cruz and Alejandro Hernandez were sentenced to death for the kidnapping, rape, and murder of 10-year-old Jeanine Nicarico -- actually committed by Brian Dugan. The two men successfully appealed for retrials because they had not received separate trials. By that point, Dugan had confessed to the crimes himself. The prosecutors and deputies who were aware of Dugan's confession kept it secret, and Cruz and Hernandez were again convicted.... but finally the secret was revealed, and Cruz and Hernandez at long last were freed rather than being executed or rotting in prison. (This was a leading example of judicial error brought up as a reason for Illinois Governor Ryan's famous "moratorium" on executions.)

Unfortunately, Dugan had committed two other murders (that he was convicted of) after Jeanine Nicarico's, and is suspected of a further four murders. Was it worth keeping Dugan's confession secret, and not prosecuting him for a murder he actually committed, in order to press bogus charges against innocent Cruz and Hernandez?

Well, another error long belatedly corrected. Now (late 2009) Dugan's been tried and convicted and sentenced to death for Jeanine Nicarico's murder. You'd think they could at least have got the defendant right the first time.

We should wait and see what happens before jumping to the conclusion that the new suspects are (or are not) guilty too.

For some further thoughts, see my own blog post about The “Satan worshipers” who allegedly killed Kimberly Simon.

I can imagine few things more horrible than being accused, much less convicted, of a crime you didn't commit.

I agree with much of your post, and can't help thinking that the "satanism" angle may be coming up now because the investigation is reacting to the old rumors rather than vice versa.

"I can imagine few things more horrible than being accused, much less convicted, of a crime you didn't commit."

Yes, but *garnish* that horror with knowing that the actual criminal may still be free to commit even more crimes by reason of your being imprisoned in his place -- and that our vaunted system of justice made it so, in effect acting as an accomplice to his crimes.

The State of Texas is notorious for its merciless and even reckless execution of prisoners, despite substantial doubts raised about their guilt -- and of course, as Justice Antonin Scalia famously stated, even proof of actual innocence is no bar to execution:

"This Court has never held that the Constitution forbids the execution of a convicted defendant who has had a full and fair trial but is later able to convince a habeas court that he is 'actually' innocent."

So it's worth pointing out that the Texas Governor with the very highest record of executions, George W. Bush, actually did, just once, exercise his authority to commute a death sentence to a life sentence, on the basis of "actual innocence".

Who, of all those so sentenced, was the one person deserving his consideration?

Tainted DNA evidence neither convicts nor exonerates... ask the Oneida County District Attorney. An individual that acts in concert with other individuals, is also guilty of the acts that they commit.

Miller Jr did not commit suicide!!!