Raven, bless his soul, sent over a couple of real gems being offered by DriveThruRPG. March 4th has become "GM Day", a commemoration of the tireless work of gamemasters everywhere. Imagine my surprise when I learned my old Cyberpunk/Traveller: 2300 campaign, the last tabletop game I actually GM'd, entitled me to some insanely cheap PDFs from the DriveThru store.

Well, technically everyone is entitled to the sale prices, but I still think my campaign was crazy awesome.*

Two products from Adamant Entertainment caught Raven's eye because they incorporate some handy period resources from the Victorian era. Even if you're not particularly interested in gaming, much less D20 tabletop gaming based in that time period, these would still be cool to have. 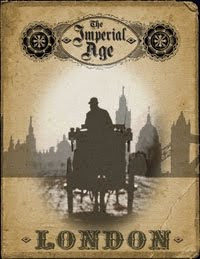 The first is "The Imperial Age: London", a guidebook to the greatest city of the British Empire at it's height. In addition to all the world-specific fluff and gaming crunch there's this:

Included within the pages of this supplement is a genuine Imperial Age document -- the 1899 edition of Bartholomew's Pocket Atlas & Guide to London, featuring detailed street-level maps of every corner of the city, as well as a reference index to streets and places of interest. The second is "The Imperial Age: British India":

...A regional supplement for Imperial Age campaigns, covering the history, cultures, and governments of British India during the 1880s and 1890s.

A complete guide to the subcontinent is included, detailing the territories that made up the British Raj and its surrounding neighbors. Reprinted in full is a genuine Imperial Age document, the 1893 edition of Constable's Hand Atlas of India, featuring 16 pages of detailed period maps.

Both products are $1. That's right, a buck apiece. You can download both for less than the price of a good cup of coffee. Sale prices are good till March 8th.

From a propmaking standpoint this is the kind of authentic period material that can really flesh out a vampire hunting kit or steampunk project. One of the reasons I post so many photographs, documents, and maps is because they help bring a world to life and make it more believable. Benchmark props like the Grail Diary from "Indiana Jones and the Last Crusade" or The Book of Secrets from "National Treasure" are good examples of conceptually simple props taken to a whole new level by the incorporation of extensive ephemera. These two gaming sourcebooks look like a rich source of printed material for anyone working on Victorian era projects.


* It was epic. A simple street-level murder investigation in New York turned into a three year run from the law that ended with an "Outland" style showdown on an asteroid mining station light years from Earth. My one and only professional game writing credit is for a slew of bioware from that campaign that ended up in the third Chromebook for Cyberpunk:2020.

Update: It appears the description of the "The Imperial Age: British India" book, claiming the supplement includes "Constable's Hand Atlas of India" reprinted in full, is not true. The supplement only contains 16 pages of maps from the atlas, all of which are direct scans of public domain materials without any cleanup or geometry correction. Meh. As Doc points out in the comments, a full copy of the atlas is available through Google Books at http://books.google.com/books?id=-kAuAAAAYAAJ. It's still a rough scan, but it's free.

I'm also a little disappointed with the "The Imperial Age: London" guidebook. It does indeed include a large portion of the 1899 Bartholomew's atlas, but the resolution and cleanup of the document scans is minimal. Some high resolution scans of the functionally identical and complete 1900 guide are available over here.

Mind you, my criticism is only based on the included period documents. From the standpoint of useful information about London and India in the Victorian age both books are still a bargain. From that perspective the $1 for each PDF is an investment you'll get an outrageously high return from.
Posted by Propnomicon at 8:40 AM

I don't know how much of the material is drawn from it, but the entire copy Constable's Hand Atlas of India is available for free from Google Books.

The entire Imperial Age series by Adamant Entertainment is well worth purchasing. I have yet to be disappointed in anything they I have purchased by them.

Let me add, for your browsing pleasure:

Aaaaand, besides the aforesaid Google Books, how could we neglect the famed WayBack Machine itself, the Internet Archive?

Over on Yog-Sothoth.com, WinstonP linked to "a Classic era road map of New England. It is downloadable, and has an index that lists how many hotels a city had. Sadly it neglects certain towns (what, no Arkham?), but otherwise, is a real treat for folks playing in Lovecraft Country."

Here is a familiar eastern promontory section of Essex County, Massachusetts, page 59 from that book (Official Maps of New England). Consider what you and a graphics program could do with it.