Shane Mangus of the excellent "Swords Against the Outer Dark" site solved a mystery when he sent over this snapshot from the Wikimedia Commons yesterday. I've seen variations of this image dozens of times while filtering sites like Flickr for Lovecraftiana, but until now I didn't know it was an actual sculpture on display in Puerto Vallarta, Mexico. 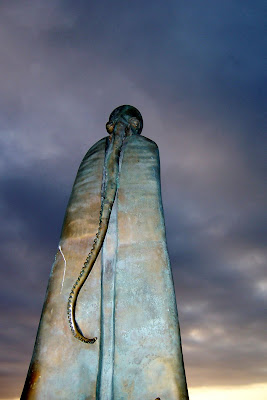 Learning where it was eventually led to this writeup in Wired about the piece in question, as well as the larger installation it's a part of.

(Puerto Vallarta) is actually very nice, by and large, though for whatever reason it did not agree with my constitution. One day I strolled the lengthy beach-front boardwalk (the “Malecón”) in an effort to adjust and take in local color. I was pleased with the non-touristy things, mostly disgusted with the tourist-targeted nonsense, and greatly impressed and surprised with the copious amounts of statuary dotted along its length.

And then I reached a particular installation, and was simply flabbergasted…

Known as “La Rotunda del Mar” (”The Circle of the Sea” in my poor, poor Spanish), this installation by artist Alejandro Colunga features creatures/beings straight out of Innsmouth and Lovecraft’s imaginings. Fabulous! 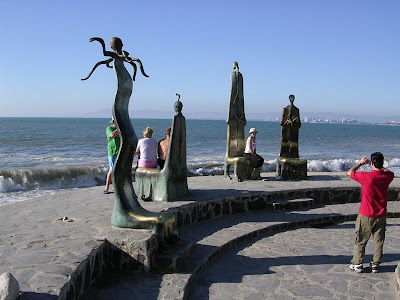 By any standards it's an amazing bit of work, but the depiction of towering tentacled forms arranged like an altar makes it one of particular interest to Mythos aficionados. I can't help thinking of Fritz Leiber's "The Terror From the Depths", probably the best story involving modern artistic and architectural interpretations of the Mythos ever written, while looking at it.
Posted by Propnomicon at 3:00 AM

I am glad you were able to track down the source, and supply the additional picture and information. Who would have ever guessed that Puerto Vallarta would have something like this on display? Very cool!

I am going to have to hunt down this story by Leiber. However, those weird statues are also remind me of the frantic action towards the end of The Sunken Land, also by Leiber.

With the ocean so close, and by looking at the statues, it appears that at high tide they may be partially underwater. ( Not sure however... ) That would be cool if they were!