This photograph of submarine S-8 was taken at the Norfolk shipyard February 9th, 1928, six days after the raid on Innsmouth. According to the official record the ship is undergoing repairs for minor damage suffered after an underwater collision with a toothed whale. The panicked animal attacked the upper hull and conning tower after it became entangled in the deck rigging, causing scrapes and scratches to the plating and portholes before it was ripped free and pulled into the propellers and steering vanes.

A closeup of the deck area showing an officer and crewman outside the conning tower. The porthole used by the steersman, unique to the S-series, is visible in the front of the structure. 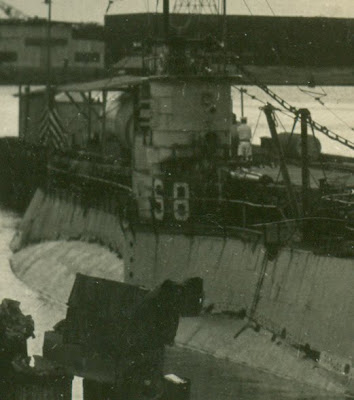 This is a mildly retouched and cleaned up version of a period snapshot that I picked up from an estate sale on Ebay. The original is dated to 1929 and actually shows the S-18 in dock, making it wonderfully easy to adjust the ID number.
Posted by Propnomicon at 4:00 AM

Excellent! Looks like it's straight from 'A Pictoral History
of the Innsmouth Incident'.

I have just finished reading the Shadow at Innsmouth. And i must say your pictures were helpful in setting the mood for my first forays into the Cthulhu Mythos :) Splendid photos!