I found an email in my inbox this morning drawing my attention to the amazingly well-done Wonderland Expedition Kit, a whimsical "Alice in Wonderland" flavored take on the gaffe-style vampire hunting kits I mentioned last week. What makes it all the more delightful is that it was created out of love:

My lovely girlfriend's birthday is on Sunday, and since she's so fantastic, I wanted to make her something very special. She's a big fan of Alice in Wonderland, and we were awe-struck by the incredibly well-crafted and detailed creations of AlexCF, so I combined the two.

"Artifacts, Specimen, and Ephemera salvaged from the Wonderlands"

When Alice fell through the rabbit hole, she tore a rift between our two universes. Through this open rift, "nonsense" began leaking out of Wonderland. With a decreasing amount of nonsense, Wonderland became a more logical place, and since vanishing cats and singing flowers cannot exist in a logical universe, Wonderland began to die.

Professor Jonathan Lake, of Miskatonic University, traveled to Wonderland in attempt to catalog and archive the remaining flora and fauna so that Wonderland would not disappear into the forgotten depths of history. This is his collection of specimens, artifacts, and ephemera salvaged from the Wonderlands. 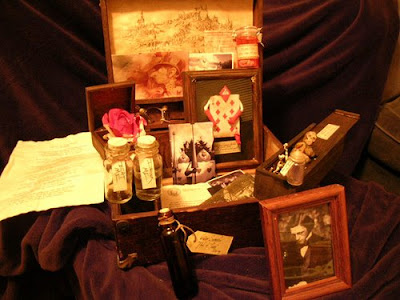 Even better, I was immensely pleased to discover I had a small, small part in it's creation:

That's my Miskatonic University seal in the background! How cool is that? The kind emailer thought I might be upset that someone used it, but my reaction was quite the opposite. I'm overjoyed that the artist made it a part of his amazing project. That's the whole intent behind making everything here available under the Creative Commons license- it's yours for the taking. If you like it, use it. Just spread da love by following the share alike rule.

Speaking of which, I should have an improved version of the Miskatonic seal up sometime next week. The original version was bashed together in Paint Shop Pro, but now that I'm using Adobe Illustrator I'm redoing it to get rid of the pixellation when you blow it up.
Posted by Propnomicon at 11:28 AM