Make It Cheap, Make It Awesome

One of the most overlooked materials in propmaking is paper mache, that humble mix of torn paper and paste that most people forgot about after grade school. That's a shame, since it's both incredibly cheap and fantastically versatile. I have a paper mache project drying on my workbench that I'll be able to show off in a few days, which is one of the reasons I dug up a few resources I thought you would be interested in. The first is an in-depth tutorial for making a paper mache puppet mask by Mary Robinette Kowal:

Papier-mache is one of the oldest forms for creating puppets and so a lot of people think that there must be something better out there. Actually, there are very few contenders. Done well, papier-mache is light, strong, fast, and non-toxic. I know, we’ve all had the experience of the lumpy paste, and corners that stick up and a thing that requires years of sanding to even resemble smooth. It doesn’t have to be that way. I’ll show you a technique that will only need three layers and can be danced on. 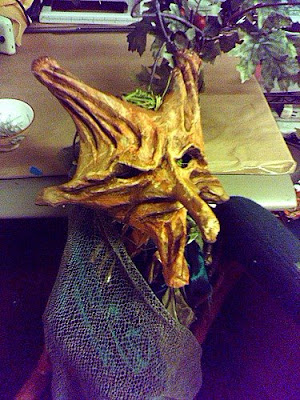 The second is from the same series of posts involving the creation of puppets for a production of "MacBeth". This one covers the building of a gigantic pair of arms with hands:

To catch you up on what I spent the last several weeks building, I’m going to be posting some photos that I took during the build.

The wood witch needed hands capable of picking things up. Fortunately, you can find such a thing in your local neighborhood hardware store. This trick won’t work for a lot of puppets, but the wood witch was the perfect size for using grabber arms. 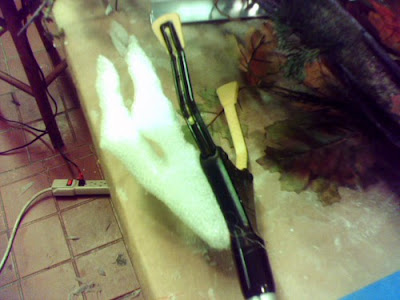 The usefulness of these techniques for conventional pen-and-paper gaming may be a bit questionable, but I know the LARP crowd could definitely benefit from them. It's hard to justify the rather sad "guy wearing a tie-dyed sheet" approach to the Big Bad in a live-action scenario when the creative use of paper mache and a little creativity could produce something far more memorable.
Posted by Propnomicon at 2:52 AM