I think this is going to be the final version of the redesigned expedition logo:

Here's the black and white version: 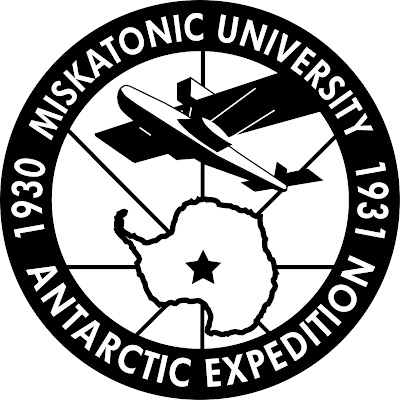 Again, it's basically the same design as the original, but with a few subtle differences. I discovered that the "Frutiger" font I used in yesterday's iteration wasn't actually developed until 1975. After a little more research I replaced it with a weighted version of "Futura", which became available in 1927. It has the same clean lines, but has the advantage of being more historically accurate.

Well, as accurate as a fake expedition patch based on an almost eighty year old story about hyper-evolved starfish aliens in the Antarctic can be.

I also made some small adjustments to the graphic elements of the design. The Dornier Wal is slightly larger and I tweaked it's proportions to make it stand out a bit more. The "South Pole" star is a five-pointed star instead of the six-pointed one in the original design as well as being larger and slightly rounded. Yes, that's a nod to the imagery of the story.

The black and white version of the logo received even more tweaks and became a considerably better graphic in the process, in my humble opinion. The bold black outer band really stands out while also providing some needed bleed space for when it's converted into a sticker. I enlarged the Wal graphic just a smidge more and think it really pops out now. One of the side benefits of the extensive black space is that it will be easy to transfer the logo onto physical objects- just run off a photocopy with the image reversed and you'll be able to do a heat or solvent transfer onto almost anything.

As always, I'd appreciate your feedback. Barring any major problems brought to my attention I'll be ordering both the new embroidered patches and a black and white decal set this week so I can have them available in time for Christmas.

Update: In response to an emailed question- Yes, the designs and artwork are covered by the Creative Commons license down at the bottom of the page. You're free to grab 'em, use 'em, and abuse 'em with just a few minor restrictions you can find at the CC site. Basically it boils down to providing an attribution, releasing any derivative works under the same CC license, and not selling any products that use the artwork. You can click on the pictures above to get high-rez versions. I'll have the full vector files up by the end of the month.

Update: Someone asked about my photocopy comment above. You can transfer the image from a toner-based photocopy or laser printer onto another object using either heat or a solvent. You can find tutorials on how to do it here and here.
Posted by Propnomicon at 12:41 AM

Labels: At the Mountains of Madness, Physical Props

Oh, yes. Beautiful. I'm enjoying that larger plane element - it adds stronger substance to the design. Glad, for one, that you revised the revision. Like your package plan, too!

Hi! I'm not sure if you'll read my comment since this is a very old post, but I really wanted to say thank you for creating such great designs and putting them under the CC license. I've just gotten my vintage-style T-shirt with the Antarctic Expedition logo today (had to order it through a local shop, since Zazzle doesn't ship to my country), and I already love it to bits. In fact, it's been quite a long time since I've felt so happy over a piece of clothing :) Good luck and please keep up the wonderful work!