One of the nice things about my particular collecting obsession is it's flexibility. There are only a few specific items described in "At the Mountains of Madness", so I'm free to use a lot of conjectural material. Case in point: anything related to the Dornier-Wal.

Lovecraft doesn't mention the plane specifically, but the description of the expedition's aluminum hulled seaplanes matches the Wal perfectly. They were the aircraft Roald Amundsen used for his attempt to fly to the north pole and it's generally accepted by scholars that Lovecraft used contemporary accounts of the flight as an inspiration. That's why the Wal is featured on my patch, and it's one of the reasons I've started collecting Wal memorabilia. The others being that it's just an insanely cool example of period design as well as the perfect aircraft for all kinds of 30's era pulp adventuring.

It's going to be a while before I can lay my hands on an actual owners manual, so I came up with this excerpt to tide me over. It's based on scans from the real manual produced by the Marina di Pisa factory in Italy where the plane was manufactured. 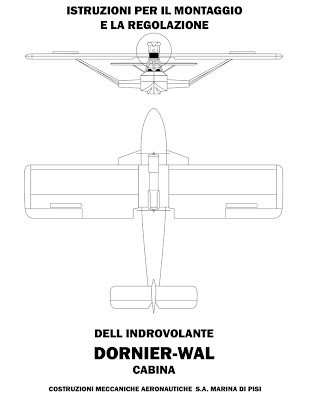 Labels: At the Mountains of Madness, Dornier Wal, Prop Documents

More information on the unique world wide history of the Dornier Wal flying boat can be found on www.dornier-wal.com and the book Dornier Wal a Light coming over the sea