Elder Thing On Ice, And A Meltdown

Here's the final version of the Elder Thing snapshot, at least for now. 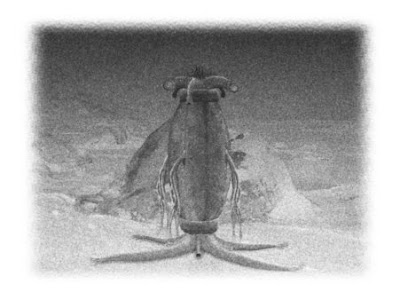 On one hand, I really like it. It fills in a big gap in my "At the Mountains of Madness" collection and it's particularly convincing in actual print form.

On the other hand, I hate it. It's one of the best photo retouching jobs I've ever done, but that's not really saying much. I became incredibly frustrated while making it because I lacked the skills and experience to make the vision in my head a reality on the screen. I know the learning process is based on making continual, incremental improvements, but I'd be a lot happier if my increments were a bit larger.
Posted by Propnomicon at 3:43 PM

Labels: At the Mountains of Madness, Prop Photographs

I think it looks pretty darn good! I know with many of my projects I have a heard time stopping as I want everything to be just so! I think this looks reasonably convincing!