Before There Was Duct Tape


As the old joke goes, duct tape is like the Force in "Star Wars".  It has a light side and a dark side and holds the universe together.  The stuff is beloved by tinkerers across the globe because it's so damn handy.  Wherever you find people fiddling around with stuff, you'll find duct tape being used and abused in ways it wasn't originally intended for.

Except...that's not quite true.  The shiny grey cloth backed tape we call duct tape was "invented" during WW II.  At that point it was called "duck tape" because of it's waterproof qualities, and became a go-to tool for field expedient repairs in the military.  It wasn't until the explosion of HVAC technology in the 1950s that workers started using it to seal forced air ductwork and the "duct tape" name came into widespread use.

I put "invented" in quotes because the basic concept of duct or duck tape, a waterproof, cloth backed tape with a strong adhesive on one side, goes back well into the 1800s.  Back then the same basic product was called adhesive plaster or surgeon's plaster.  It was intended for binding bandages and wound dressings, but it didn't take long for people to realize it had a million uses. 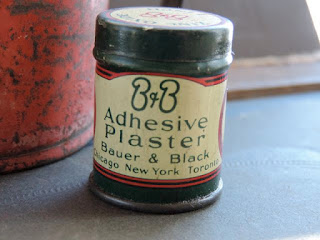 My own introduction to the wonders of adhesive plaster in the classic Mythos era came via the 1910 edition of Horace Kephart's "The Book of Camping and Woodcraft".  He was a big fan of the stuff, recommending it as a valuable tool in a camper's kit.

Adhesive plaster (zinc oxide plaster) can be bought at any drug store. Besides its regular use to hold a dressing in place where bandaging is difficult (never apply it directly to a wound), and for protecting sore spots, such as a cut finger or a blistered foot, it is a lightning repairer for all sorts of things. When warmed it will stick to any dry surface, wood, metal, glass, cloth, leather, or skin. It can be peeled off and reapplied several times. As an instantaneous mender of rents and stopper of holes or cracks it has no equal. It is waterproof and airtight. With a broad strip you can seal a box or chest watertight, stop a leak in a canoe (" iron " it on writh a hot spoon or stone) or mend a paddle, a gunstock, or even an axe-handle (first nailing it). A chest or cupboard can be extemporized from any packing box, in a jiffy, by cleating the top and using surgeon's plaster for hinges.

Select from the following list such articles as you know you will need, and make a light wooden box in which they will stow properly.

One of the most bothersome things in shifting camp is to secure opened cans and bottles from spilling. Surgeon's plaster does the trick in a twinkling. Put a little square of it over each hole in the milk can that you opened for breakfast, and there will be no leakage. To hold a cork in a bottle, stick a narrow strip of the plaster over the cork and down opposite sides of the bottle's neck. To protect the bottle from breaking, run a strip around it at top and one at bottom. The caps of baking powder cans or similar tins can be secured to the bodies in the same way.

If your fishing rod sticks at the ferrules, wrap a bit of the plaster around each joint to give you a grip, then pull without twisting. 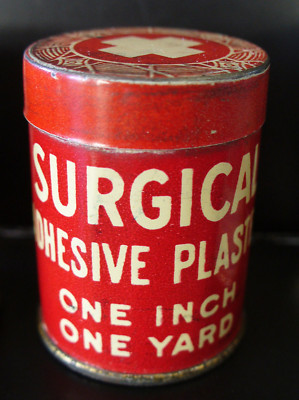 In 1915 "Motorcycle Illustrated" had some handy tips on using adhesive plaster to repair grips, tie down cables, and fix flat tires.

By 1918 Baur and Black, one of the leading manufacturers of adhesive plaster and first aid supplies, was featuring its all-purpose possibilities in advertising. 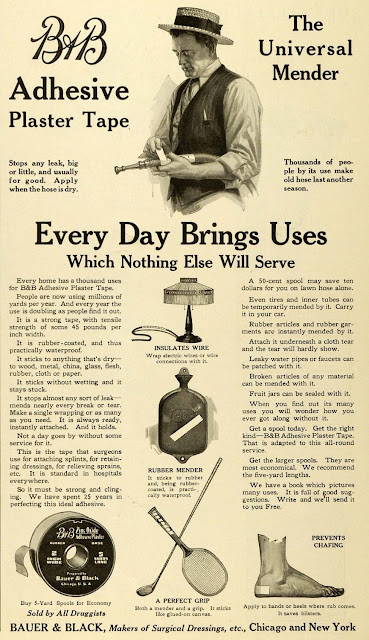 I love stumbling across these little details of the early 20th century.   It not only brings the period to life, but provides some interesting ways to add realism to props from that time frame.
Posted by Propnomicon at 3:00 AM

An outstanding article, Propnomicon, you’ve excelled yourself in period Mythos research. For now on, I’ll have to ensure that “sticking plaster” is part of the quick kit that an adventure might toss into an excursion bag, pocket or purse. I’ve added it to my listing of adventurer goodies.

One additional use for adhesive plaster tape was that it made a great label. You only need stick a bit on an object and you can easily write on it with a fountain pen. I’ve turned up crumbly old labels on objects that were from 50 to 100 years old. It seems it was a handy way of marking things. Also some types of adhesive plaster was super sticky.

Thank you for the kind words. I actually stumbled across Kephart's praise of adhesive plaster while researching period expedition gear. While reading that passage I realized it was the same stuff used to seal up medicine bottles in late 19th and early 20th century medicine chests. Synchronicity, and all that.

As you point out, labeling was another popular use for the stuff. That's another detail to add some period authenticity to both vampire killing kits and expedition gear.