A professor of ancient languages discovers an amulet dedicated to a forgotten god.  The artifact has a variety of powers, but the most notable is the ability to kill anyone with a single word.  A classic Mythos story?  No, it's the plot of an obscure fantasy comedy from the early 60s.

CoastCon Fan has a look at the William Castle film "Zotz!".  One of the gimmicks of the original theatrical run was a surprisingly well done reproduction of the magical amulet that drives the story. 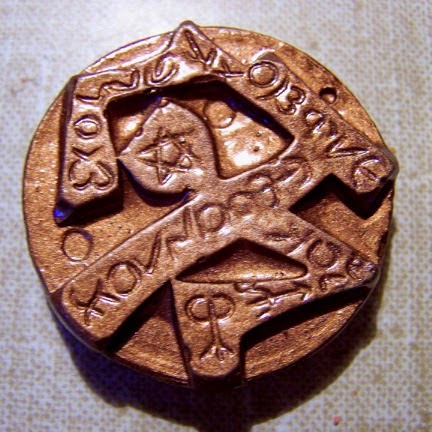 I had one of these plastic amulets as a souvenir from the original theatrical run -- and, being the 9-year-old child of two scientists, immediately put it to the test -- but must report that (alas) it failed to function as depicted in the film.

I forget how I came across this on the IMDb, but they consider it a comedy, and not the dark, Lovecraftian story it could be...

I'd love to see both versions of the story.

A quick update -- I just found out that ZotZ! is on YouTube as well as the trailer. I'm getting sloppy in my old age.

Just watched this movie a few weeks ago.
Definitely treated as a comedy- but the whole thing feels "off" that way considering the coins powers.
Good cast too.

When I was a kid age 11 I saw Zotz at a theater in West Los Angeles. The story really stuck in my mind, partly because the admission booth gave a plastic Zotz coin to each kid (not sure if adults got them). I still have mine in perfect condition 54 years later. I once saw a hardback copy of the book in a Loveland book store, but price was sky high. I have looked, but never found this film listed on demand or Netflix or premium cable channels. Too bad, because just watching the trailer shows how good the story was.