I hope regular readers will once again indulge my "Fallout" fandom.

One of the reasons I've become so intrigued by the series is that it hits the same buttons that drew me to Mythos props.  Both draw heavily on period design work.  For Lovecraftian items that's the imagery and typography of the 20s and 30s, while Fallout mines the 40s and 50s.  The two also share a love of pulp super-science filled with fantastic devices powered by glowing vacuum tubes.  What's not to like?

YouTube is filled with great Fallout prop tutorials, including these step-by-step videos on recreating in-game bottle caps and product boxes by Keevanski.  One thing that really stands out is her use of "Bitumen of Judea" as a griming agent.  I've never run across it before, but some Googling revealed it's a popular aging technique in woodworking and interior decorating.  I really like the dark sepia/black effect it produces.


As an aside, I was interested in re-creating the in-game first aid box that appears in both "Fallout 3" and "Fallout: New Vegas". 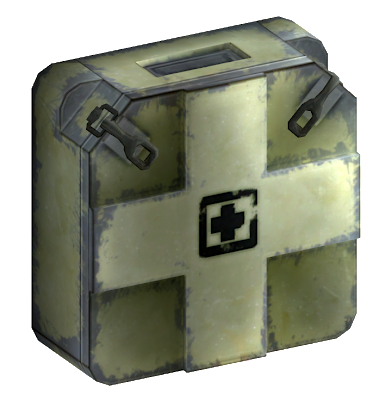 In an example of how absolutely everything is connected, one of my best friends collects vintage first aid kits. Both of us were convinced the video game kit was patterned after a real-world example based on its dimensions and latches, which are tantalizingly close to several examples. After banging our heads against a wall I finally got around to actually reading the Fallout wiki entry for the kit. It turns out it is, indeed, based on a real item, but not an industrial first aid kit. It's a carrying case for a German anti-tank mine from WW II. 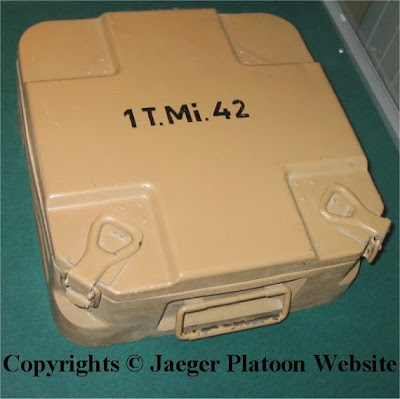 I thought "Bitumen of Judea" sounded familiar. IT was used to make the first photograph:

Interesting, my exposure (so to speak) with Bitumen of Judea was from early photographic history, see http://www.niepce.com/pagus/invus3.html

I had no idea that it was used as a darkening agent on furniture outside of the middle east. I had a table from Iskinderun, Turkey, which is well known for using bitumen as a type of “Japaning” on their inlaid furniture to better show off the mother of pearl and wire inlays.

Bitumen was pretty useful to the ancient Egyptians. Further north, the ancient capital city of the Nabataeans, Petra made their cash on the stuff. Most of you might remember it from Indiana Jones and the Last Crusade. BTW the treasury building that is so often filmed, is separated from the city itself by a pretty good sized hill. Everybody forgets the large (and largely undug) metropolitan area.

I’ve got to say, I was pretty tickled with the purposing of the mine box into a first aid kit. It shows a lot of ingenuity. I recall seeing people using shoe polish to achieve aging on props, previously. I have to say that I also have an affinity to Cold War items also, having lived through a good portion of the era. Duck and cover boys and girls: https://www.youtube.com/watch?v=IKqXu-5jw60 and for more dark, period fun https://www.youtube.com/watch?v=mFcRhDtkQyQ .

"I hope regular readers will once again indulge...."

We even indulge your once-yearly silly-Chthulu amusement (oh such an agony [actually not]).

But in this case the Fallout prop demos fall right into your mission statement -- "DIY information for creating your own works" -- since weathering, aging, griming, etc., apply just as well to any time period. "What's not to like?," indeed.

I love how becoming a fan of a four year old videogame leads to the discovery of a new aging technique that involves a substance intimately tied to biblical history and the founding of photography.

It's a glorious time to be alive.

My son just couldn't believe there was a time we genuinely feared a nuclear holocaust. Or that Russia, of all places, was the boogeyman we feared.

Yeah, but I still feel guilty ranging far from the Mythos. There is a Lovecraftian segment in "Fallout 3", but it's pretty tenuous.