Gage Prentiss brings us the Jade Toad, an artifact with a disturbing history.


The origins of the Toad are steeped in mystery. It was first recorded in the postmortem effects of a soldier who had drowned coming home from the Korean War. He had simply walked off of the side of the ship one night after claiming to have heard the most beautiful sound. From there it passed from family to family, antique shop to antique shop, gaining notoriety from the one thing all its subsequent owners had in common. Rich or poor, meek or powerful, they all died by self afflicted drowning. Though considered a cursed object, it is still bought and sold. 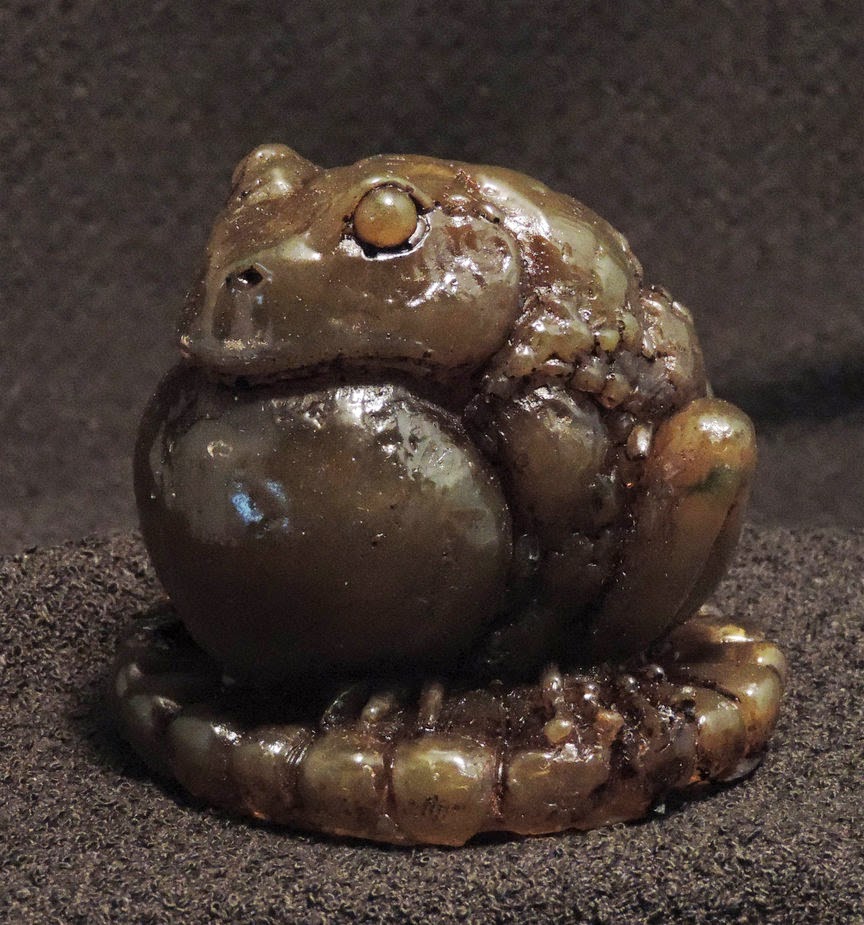 I like this different idol. Clark Ashton Smith wrote mythos based stories with Tsathoggua as a toad-like horror and HPL had a different version that appears as The Whisperer in the Darkness. But this is a totally different spin from European tales. See also https://en.wikipedia.org/wiki/Tsathoggua

This particular figure appears to be an inversion of Jin Chan, the Golden Toad who is the prosperity-giving amphibian in Chinese culture, however this toad brings evil. A nice point in this figure is making the toad to appear to be brown jadeite, giving it golden color, just makes it more ironic. Speaking of iron, brown jadeite is found in iron rich areas only. Being porous, jadeite absorbs the iron oxide from the surrounding soil giving it the distinctive color.
Some information on jade and jadeite
http://www.palagems.com/burma_jade_pt2.htm
http://www.buyjadeite.com/
Jin chan
https://en.wikipedia.org/wiki/Jin_Chan
http://www.exploratorium.edu/frogs/folklore/folklore_2.html

Wow I really like the finish on this piece, the slight translucence really suits it.