Jason Heath has been busy promoting his upcoming film The Cthulhu Key , but found time to send over this picture of his wife with horror film staple Sid Haig at a recent convention. 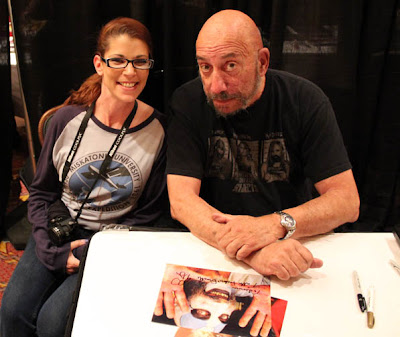 This means I, or at least my Miskatonic T-shirt, now have only three degrees of separation from James Cameron- myself to Jason and his wife, them to Sid Haig via their appearance at the con, and Sid Haig to James Cameron via the infamous Roger Corman opus "Galaxy of Terror". Mr. Haig played the role of Quuhod in the film while Mr. Cameron served as production designer.

I'm not sure if pointing that out is a credit to my memory for film minutia or a demonstration of my questionable vanity. Heh.
Posted by Propnomicon at 3:00 AM

Big fan of HPL and your blog, and enjoy the sublime 'artefacts' you find across the world attributed to the Mythos, and as I am a also a fan of your blog, I gave you an award over at mine:
http://conventofblood.blogspot.com/