A spirit binding skull is a magical implement used to capture and hold non-corporeal entities. It's created using a set of obscure rituals performed on the skull of a killer that has taken a human life with his own hand. Once procured it's scoured of all flesh with black sand, sealed along the calvarium and eye sockets with a mixture of clay and bone dust, and empowered during a final casting session that consumes part of the creator's life force.

To use it the caster confronts the spirit he desires to trap and begins chanting the ritual of binding. He then exposes the foramen magnum, the hole at the bottom of the skull where the spine connects to the brain, and compels the final binding. If the spell is successful the spirit is drawn into the skull. The caster can then seal the magnum opening with more of the bone and clay mixture to trap it permanently. 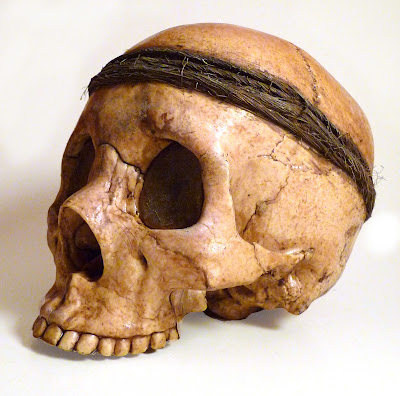 I've had this prop skull for close to ten years. It started life, so to speak, as one of the defective anatomical skulls sold as Halloween decorations by the Anatomical Chart Company. The top of the skull is removable so that students can study the brain cavity, but mine had a particularly rough time coming out of the mold and had a massive gap between the skullcap and lower skull. I covered that up with a few windings of sisal cord, slapped a detail wash of black acrylic on it, and used it as part of my Halloween display until last year. 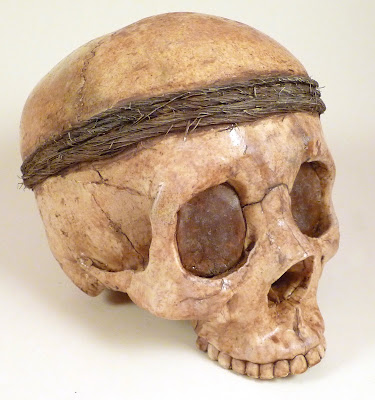 I pulled it out of storage when I needed something substantial for a paperweight on my desk. The old finish was fine for a background prop on Halloween, but since I was going to be looking at it every day it needed a makeover. The first step was giving it a wash with Golden Oak woodstain for a nice aged look. Then I formed the clay plugs in the eye sockets from epoxy putty. After hardening they received a quick coat of brown acrylic.

To add some more wear and tear I mixed up some griming paste in a paper cup using a few tablespoons of baking cocoa, a healthy dollop of PVA glue, and a good shot of dark green acrylic paint. Why green? The woodstain produced a warm orangish finish on the skull, so the faint greenish tint of the paste would add some contrast. I thoroughly stirred the mixture, adding more cocoa powder until it was the consistency of cake batter. Then I used a paper towel to apply the paste with a scrubbing motion, dulling the shiny finish left by the woodstain and producing more of a satin effect. To reproduce the look of the clay seal around the top of the skull I used a cheap paintbrush to slather a thick coat of the griming paste over the sisal and then wiped it off with paper towels. Once all that was dry I did a light drybrushing with yellow and antique white, followed by a spray coat of sealer. 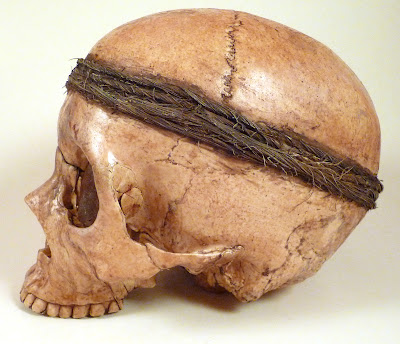 Now that has a very satisfyingly... organic tone to it.

Thanks much for the write up! I'm currently trying to weather some plastic + papier mache skulls; now I know what to look for in the paint dept.