I've moved from doing sketches of potential Arkham Sanitarium logos to rough layouts in Illustrator. There's still quite a way to go, but things are moving along. Slowly and painfully, but they're moving. 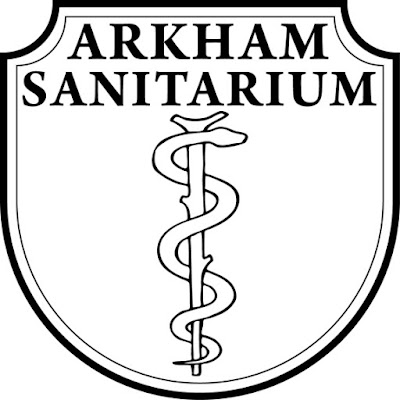 This is the first iteration, when I was still thinking of having a central design of the Rod of Asclepius with a psi symbol and lantern on either side. I inked the rod by hand and then scanned it in and converted it into a vector image. After doing a few sketches I finally found a shield design that didn't make the "Arkham Sanitarium" lettering look awkward. 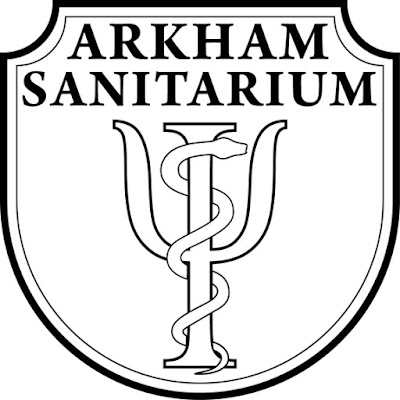 The second iteration, with the Rod of Asclepius merged with the greek letter psi used to symbolize psychiatry and psychology. Looking at it now I think it's the best layout of everything I've tried. The curving arms of the psi nicely echo the shape of the shield, but the font is a little weak. 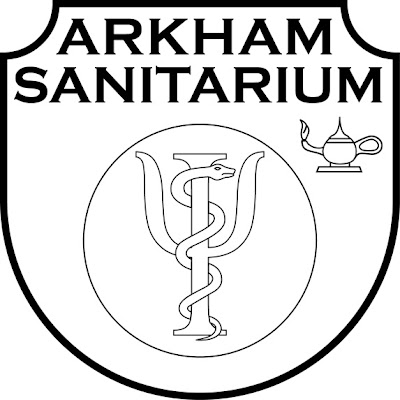 Third iteration, returning to the concept of using multiple symbols. The only thing I really like about it is the font. Everything else is pretty blah. 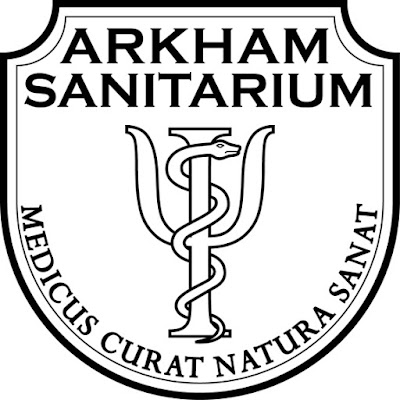 The fourth try. It's not working for me, and I think the motto is just a distraction.

This is the part of designing things that I have a love/hate relationship with. I've come up with a few elements that work (the proportions between the shield shape and the lettering, the snake and psi design), but I've also gone through a ton of things that look terrible. That's one of the reasons I haven't posted any of the variations using wreaths or the multiple lamp designs I experimented with.

The one great thing about doing the work on a computer is that it's so easy to add and remove elements and move things around. Personally, I'm a firm believer in Sturgeon's Law- 90% of everything is crap. A computer isn't going to make you better at anything, but it's a miracle machine at letting you work through the 90% so you can get to the 10% that's worthwhile faster.
Posted by Propnomicon at 3:00 AM

Have you experimented at all with putting something behind the snake and the psi? Maybe just a second field of another color to make that area stand out. It feels empty, is what I'm thinking.

It might be fun if the snake looked just a little bit like a tentacle. Nothing obvious, just a hint of otherworldlyness.

I have exactly the same reaction. The central design is strong, but it needs additional elements that reinforce it to keep the whole thing from looking too empty.

You also touch on one of the issues that complicates things- color. The logo has to look good in black and white for props like letterhead and forms, but it also has to have an attractive color scheme for things like the eventual patches and pins.

That's another fine line to walk- coming up with a realistic period design that has a touch of the meta, but not so much that it's distracting.

I very much like the serpent-and-Psi logo, particularly in #4 with face and bolder outline.

It would be really neat if this ends up being used as a logo for real-world psychiatry/psychology.

All your reasoning applies....

I like where you're going with it. It has an official quality to it -- they all definitely look like something you'd find in real life, which is, I think, the hallmark of your work. (Personally, I like that it doesn't drift into the metal with tentacles. But we've had this conversation.)

Can you do patches in shield shapes? Or would you have to create a round-bordered version for patches (and pins)? Personally, I'd love to add this to my Propnomicon collection one way or the other -- I'm looking forward to seeing where it goes!

I like #2, but with the Copperplate lettering, as you indicated. I am wondering if a shield shape similar to this one http://www.freeclipartnow.com/d/29568-1/388th-Fighter-Wing-Shield.jpg would work better. Personally, I like the pointy bit at the bottom of the shield better than the rounded, and on this style, the scroll could hold the motto.

Not sure if this is period, but...

I was going to suggest trying a lantern on each side (I was thinking along the lines of the lantern from the standard Hermit/tarot, with rays shining "outward"), but you specifically mentioned being dissatisfied with "multiple lamp designs" so I'll assume that's been rejected. Have you thought about a single lamp *behind* the asclepius? Just a silhouette in a solid 20 or 30% tone? Something large enough to fill the space if the asclepius were not there, but with no details so that the asclepius overlaid pushes it to the background.

It seems to me it would be enough to break up the large blank of the negative space, but would not be enough to detract from the main elements (though it's just a guess, having not actually worked one up). I'm not sure what period you're wanting the logo to appear, but printing and graphic design advanced quite a bit between the eighteenth century and the late ninteenth/early twentieth century--and a lot of establishments modernized their logos between 1880 and 1930...

The mind boggles at the potential income stream having it adopted as an actual psychiatric symbol would generate. Heh.

I go back and forth on the facial features for the snake. It took forever to get the shape of the head silhouette accurate.

As always, thank you for the kind words. The shield shape seemed natural for something that would be worn by orderlies and such. I've already looked into production costs for both patches and pins and it shouldn't be a major hurdle to have some custom dies cut.

The shape is definitely period. I've seen some vintage military patches on Ebay dating to WWI with exactly that kind of design.

Sorry, if I was misunderstood. I meant that I was wondering if the shield style that *I* like is period (see link above). I did not mean to imply that the style you chose was not period.

Not every design screams out for a latin logo or inscription.

I personally envision something simple and clean as I'm not sure the old A.S budget would have allowed for luxury add ons and extravigent designs.

Ooh, ouch, eyes hurt. I just looked around for "prior art", and came across this terrible solecism from March 2007 still in current use at Wikipedia: the caduceus (Mercury's winged two-serpents wand) superimposed on a black Psi, used as a symbol of psychiatry.

Well, Mercury was the patron of commerce, merchants, liars, and thieves -- which explains high fees, and all the practices of health insurance companies....

Some of the target users have realized the error and declined the symbol; but as you can see from the file links list on the file page, others are still using it.

(Note one commenter's remark that he tried superimposing the Rod of Asclepius instead, but wasn't happy with the results. Sounds like he left the staff in place.)

In my search for "prior art," the closest I found was the logo for the Singapore Psychiatric Association (same concept, different arrangement of serpent on Psi); different enough, I think, to be non-conflicting, especially if you don't use the same color scheme.

Harrumph, did also come across two non-Wikipedia psych sites ([1], [2]) who simply gave the Wikipedia image a bit of shadow or fading, to make it no longer identical -- filed off the serial number, as it were -- and adopted it in blithe ignorance of the error.

I think the eyeless snake is so much more powerful and symbolic. Psi looks great in both, can't wait for a patch.

If it's still not working for you, may I suggest less restraint? (Or do I mean "constraint"?)

The serpent seems hemmed in by the arms of the Psi. Stretch the arms farther from the center column (curling artistically at the tips?), and give the serpent room to writhe convincingly (ribcage! musculature!); let its head extend past the column into the background, for clear visibility at small size or at a distance.

If you're not going to put lanterns in the corners there, then why leave the corners empty? Your beautiful central design has been huddled down in the middle for no reason. Let it stand back up and take over its own space, corner to corner. You've got a shield to fill.

Motto? (We don't need no....) Well, even if the Psi stands on the bottom of the shield, half the motto could run up to its base, and the other half continue from the other side. Use that big empty space under the arms.

I'm going to try a variation of your idea about placing the lamp in the background. I should have something to show on Wednesday.

Both shapes are actually period, but I probably should have been clearer in my original response. The only reason I'm shying away from a pointed shield is that I like how the curved design complements the shape of the psi symbol.

Words of wisdom. Frankly, I'm probably trying to cram too much in.

Argh. My dreams of untold wealth are on life support. Heh.

Thank you for the kind words. Now you've given me another reason to confuse my decision making. Heh.

Color scheme symbolism on a white background (befitting the staff uniforms):
RED Psi, by parallel to Red Cross for other medicine, since geometrically it's a cross with the arms bent up and curved;
GREEN Serpent, not only because many serpents are that color, but because Asclepius saw one serpent bring healing herbs to another, and pharmaceuticals play a role in psychiatry. Symbolically, the cool healing green is overlaid on the inflamed red of the psyche.
BLUE letters and border, as a soothing color for the patients, and the traditional border color of philosophers' robes.

Numerological trivia: Psi is the 23rd letter of the Greek alphabet, fnord. The constellation Ophiuchus (associated with the Rod of Asclepius) is sometimes called "the 13th sign of the Zodiac."

wow, this is really cool. im about to start medical school looking forward to becoming a psychiatrist. im really interested in this design, i'm considering getting a tattoo based on the two symbols.