What do they all have in common? You can bang out a decent prop version that will add a whole new level of immersion to your game for less than ten bucks.

One of the biggest issues preventing the use of more props in both tabletop and live action "Call of Cthulhu" games is that of cost. One of the attractions of paper props is that they're absurdly inexpensive if you already own a computer and a decent printer. Download the file, add any needed customization, print it out, trim and...tada! Cool prop.

Physical props, on the other hand, can be a little more intimidating because they require more expensive materials. If you're a die-hard prop fan it's easy to drop $100 on quality silicone and resin casting supplies, and sculpting smaller projects using polymer clays like Sculpey can cost $20-$30. But what if you're working on a budget and just want to have a nice one-off prop for a single game? The answer is clay casting. Using patching compound or water putty inside a mold made from modeling clay you can create some pretty nifty items for $5.

Inspired by the examples from Dave Lowe and Tom Banwell, I decided to try my hand at doing some basic clay casting using a one pound box of modeling clay ($2.50) and a can of Durham's Water Putty ($3). I've read a lot of good things about Durham's from wargamers that use it to inexpensively cast terrain features for their gaming tables, with a big emphasis on it's ease of use and cost effectiveness. It was originally a handyman's helper for fixing things up around the house, but it didn't take long for people to start using it for "off label" projects. That's just fine with the manufacturer, which is why the website has an entire section filled with hints and tips for folks using it for craft projects. The directions for casting couldn't be simpler:

Start by mixing DURHAM'S Putty and water together to the consistency of heavy cream. Immediately, pour the mixture into the mold, tapping the mold gently while filling to bring air bubbles to the surface. After the putty has set, carefully remove the cast from the mold and fill in any air bubbles which might remain with a new mixture of putty.

My mold was a simple lump of modeling clay with the negative shape of an Elder Thing star stone carved into it. After taking the clay out of it's package I put all five sticks inside a large, microwave safe measuring cup along with a tablespoon of water. Why the water? Because the clay isn't electrically conductive, so it won't heat up directly from the radiation inside a microwave oven. With the water present it only took two minutes for the heat from the steam to spread to both the clay and the cup, producing a nice, malleable ball of clay. After kneading it together for a few minutes I flattened it out on a small dish and then carved out the mold from the clay using an old butter knife. Then I used a ball of aluminum foil to add some surface texture, followed by painting the whole thing with some cheap petroleum jelly based hand cream to act as a mold release. Here's the result: 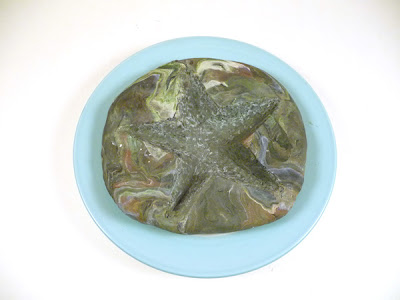 Then I followed the directions from the Durham's website and mixed up a batch of putty. Except I didn't follow the directions- I added a blob of acrylic paint to color the putty. And then I did it again. And then I stopped doing it, because adding paint to the putty is a really bad idea unless you want a weak, crumbly casting. Here are my two bad castings along with the good one without paint: 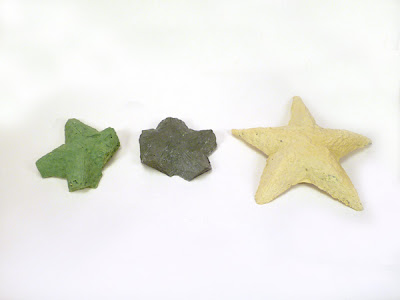 The castings with paint added are filled with bubbles and very "foamy". The material breaks easily and the fractures are course and grainy. 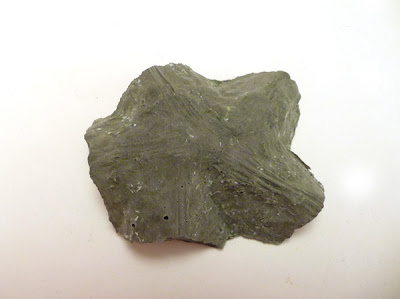 The difference in strength between the casting with paint and without is immense. The colored casts started breaking up while I was taking them out of the mold, but the un-colored material can take all kinds of abuse without chipping or cracking. See that little triangle of flash between the two bottom arms of the star? I'll probably have to remove with a Dremel tool, since it's too strong to snap off with my fingers. 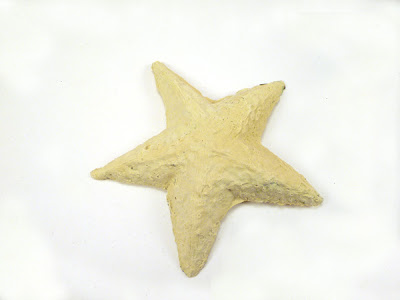 The Durham's website mentions not adding "too much" paint to the putty mix, but it's a better idea to not add any. Why? Durham's is a gypsum based product akin to plaster of paris and relies on the same kind of chemical reaction to set-up. Unfortunately, the pigment coats the powder particles and prevents them from forming the interlocking crystal structure that forms while the liquid putty hardens. At least that's my theory.

In the end it doesn't matter all that much, since the hardened putty is an excellent painting surface. It will soften slightly when exposed to water, but once it's sealed with a coat of paint it should last forever. And did I mention it's cheap? Unbelievably, insanely, cheap? The surface finish isn't perfect, being prone to bubble voids unless you scrupulously tap them out before it sets up, but for the kind of faux rock or clay props I intend to use it for that's an acceptable trade-off.
Posted by Propnomicon at 3:00 AM

Heck, Prop, the broken-up star stones look great, more believable. Too bad they were crumbly with air bubbles. I dig, maybe a flawed version with a bit missing...

Nice! While you're probably right about why adding paint makes the material weak, I'd be tempted to try some ordinary food coloring in the mix.

It's the crumbliness that really ruins them. I intentionally wanted a rough, slightly askew star shape with the ends broken off some of the arms, but the material is so weak they're unusable.

I just tried a cast with food coloring based on your suggestion and the results look good so far. I'll post some pics tomorrow or Friday.

I realize this is an old blog post, and I obviously don't know if you a) solved your paint problem or b) are even still using Durham's for your projects.

I was wondering if you used tube or liquid paint when you mixed it into the Durham's. The site states that you need to mix in powdered pigments, not liquid or paste paints. If that's what you used, it is likely why your result didn't come out very well. Either too much moisture or the binders in the paint interfered with Durham's setting up.