The Book of Secrets, Revealed

The merits of the "National Treasure" series of films (2004's "National Treasure" and 2007's "National Treasure: Book of Secrets") are certainly debatable, but the creativity and artistry that went into creating the "Book of Secrets" prop isn't. It's a stunning piece of work, all the more amazing because 95% of it's incredibly detailed contents are never seen on screen. It's creator, Ross MacDonald, has been kind enough to show some of that material at his website and he even offers a an exacting replica of the screen-used prop for sale.

For well over a year there has also been a fan-run project to recreate the book that I was peripherally involved with. That project has now come to a close, but here are some pictures of the numerous documents, pictures, and examples of ephemera included. 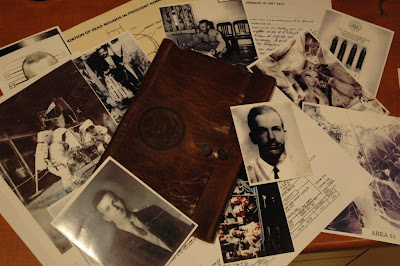 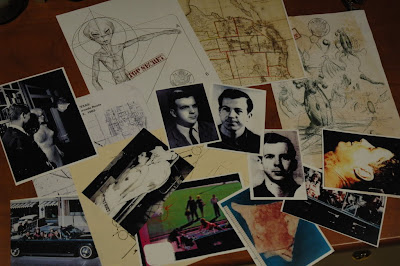 Along with the expected material involving the Kennedy assassination and the Roswell UFO crash there are several smaller sections covering secrets drawn from various literary sources. In the upper right corner of the above picture you can see part of my contribution, one of the Elder Thing sketches based on "At the Mountains of Madness" I commissioned from artist Danny Cruz. That's right, the "Book of Secrets" includes a section describing exactly what was discovered during the Miskatonic University expedition to the Antarctic. It includes photographs and sketches drawn from the materials collected by Prof. William Dyer and details the US government's official intelligence involving the matter and their response.

My section is just a small part of the book, dwarfed by the hard work of dozens of contributors that helped make the fan project possible, but it's an amusing Easter Egg for anyone familiar with Lovecraft's story.
Posted by Propnomicon at 3:00 AM

Is there a link to the fan-created website or forum discussion?

If this the book offered on the RPF forum?

Wish I had the cash to have gotten in on the small run.

I may make my own version some day as I think it is a cool prop.

So did the fan project ever get around to deciding what to put on page 47? ;-)

Unfortunately there isn't a publicly available archive of the material.

Aye, that's the one. I've been wanting to say something about it, but I agreed to keep quiet until the project was finished.

As a matter of fact they did. Heh.

I've been collecting pictures and making notes on doing my own Book of Secrets. Drawing a timeline of the presidents and events that happened during their terms they may have written about.

May get off the ground, not sure yet but always a prop I have wanted.

The COW (Club Obi Wan) Indy forum I think has a thread that shows some of the pictures of the Book of Secrets projects, cannot remember the requirements to join offhand.

G'day folks, I was one of the creators of the Replica of the umm...replica lol TazVader on the RPF. IndyTaz on COW. Feel free to contact me if you have any questions or comments. It was a great project to work on.